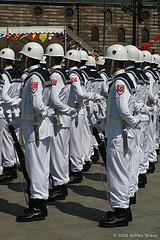 Turkey’s Back in Town!

On May 31st 2010, nine Turkish activists were killed by Israeli commandos in what would become famously known as The Flotilla Incident. The details of what happened that night on the aid ship destined for Gaza are, tragically, proving less significant than the international uproar that has ensued.

The year that followed the incident was filled with investigations and opinions; from within the global community, both friends and foes of Israel widely condemned the assault of the supply-laden ship. It is only recently though that concrete actions have been taken – most notably Turkey’s expulsion of the Israeli ambassador and the suspension of military links between the two countries on September 2nd.

On September 12th, Turkish Prime Minister Recep Tayyib Erdogan, referring to the Flotilla, had either intentionally or carelessly worded his opinion to the Al-Jazeera news station: “It is a cause for war, but we decided to act in line with Turkey’s grandeur and showed patience.” Regardless of how much thought was put into the statement, words this strong in a region as volatile as the Middle East, are bound to turn heads. If political analysts needed yet another complication to understanding the region, an invigorated Turkey may well be that complication.

A political analyst may also point out that the status quo in the region has bred mounting Arab frustration towards Israel: Arab leaders do nothing and say little, while their people desperately hold on to UN resolution 242 as some form of hope for the Palestinians. The resolution was adopted unanimously by the UN Security Council on November 22, 1967, in the aftermath of the Six Day War. It refers to the "inadmissibility of the acquisition of territory by war and the need to work for a just and lasting peace in the Middle East in which every State in the area can live in security." What is worth pointing out in this case, is that things seem to have happened the other way round: the UN ruled Israel’s blockade of Gaza and invasion of the flotilla as legitimate (despite citing “unreasonable and unnecessary force” in an attempt to give both sides a sense of justice) and Turkey is acting in response.

Turkey is now flirting with its new power to play by its own rules; these are, as any powerful nation will tell you: Politely humor, then ignore the UN.

Since veering Turkey towards democracy in their landslide 2002 victory, Erdogan’s AK party has overseen a decade of tremendous economic development in Turkey. Now the 15th largest economy in the world, Turkey’s latest growth figures make it the fastest growing European economy, and the second in the world behind China. Turkey is also Israel’s sixth-largest trading partner, and commercial trade has not been affected by the recent events, so far.

The composition of the Turkish economy, namely its strong manufacturing and agriculture sectors, has provided a sustainable source of jobs and economic activity. These are two critical elements which volatile, service-based economies have sorely missed in coping with the recession. Finally, Turkey has developed the capability to manufacture its own weapons systems; this is a development not to be taken lightly, as the country commands the 2nd largest army and 3rd largest air force in NATO.

The real Turkish success story may be seen as the AK party itself. Its roots can be traced to a group from the Islamist Virtue party which managed to admirably incorporate nationalists, conservatives and Islamists into a widely supported, compromise-driven democratic government. This is a story which undoubtedly fascinates Arab nations looking for fresh ideas on a contemporary Muslim-friendly government after the Arab Spring,

The Islamic and pro-Arab inclinations of Erdogan’s crew have now become apparent to the world. Turkey has demonstrated initiative to woo Libyans and Egyptians with its power, ideological sympathy and most relevantly to this article, its ‘rift’ with Israel. Erdogan’s latest visit to Cairo was the first of its kind in almost 15 years. The Muslim Erdogan, ruler of the largest democracy in the region, reassured thousands of Egyptian fans: “Do not be wary of secularism, I hope there will be a secular state in Egypt.”

Similar power-hungry games have traditionally been played by Iran. However, its pro-Shiite influence in the region, through factions such as Hezbollah and larger bodies such as the Iraqi government, has been received with reservation by a Sunni-majority in the Arab world. As for the West’s opinion, most religious groups such as Hezbollah are denounced as terrorists to begin with. Turkey, as a secular democracy and NATO member, poses a more credible challenge to Israel and its historical supporters.

One view of Israel’s dilemma is summarized by Gideon Levy, a columnist for the Israeli newspaper, Haaretz. In his September 15th piece “Israel does not want a Palestinian State. Period,” Levy describes the list of opportunities he feels Israel has missed in granting Palestinians their own sovereign State, the heart of the Arab world’s quarrel with Israel. He concludes: “What exactly is the alternative, now that the heavens are closing in around us? Can anyone, can Peres or Netanyahu, seriously contend that the regional hostility toward us would not have lessened had the occupation already ended and a Palestinian state been established?”

He has most certainly looked north to Turkey, which may explain his choice of “the heavens.” Erdogan’s opinion is as understanding of Levy’s frustration as it is firm towards Israel’s leadership: "Israel must respect human rights and act as a normal country and then it will be liberated from its isolation."

And isolation may indeed become a fitting description for Israel, as its supporters in The West now contend with critical issues within their own borders such as dangerously high unemployment and stuttering debt-logged economies. Furthermore (see Libya) the United States has signaled to the world its disinterest in direct intervention across its borders, at least for the time being; Campaigns in Iraq and Afghanistan have arguably created more problems than they initially came to resolve.

So what happens after a verdict is reached on the Palestinian bid for statehood? Barring a miracle, America will veto the proposal. Israel has some pressing questions to answer and soon, but so does the Arab world: The younger generation may look beyond the glistening armor of their Turkish savior and ask their grandparents about the former Ottoman empire.