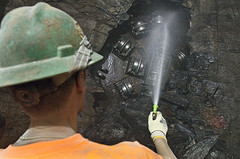 EITI: A Democratic Tool for Populations to Benefit from the Extractive Industry?

Mining dependent economies and countries endowed with natural resources have led to highly variable economic performances. A total of 50 countries are defined as being largely dependant on mining, that is, for whom mining either accounts for at least 6% of exports, or plays an important role in the domestic economy.

The vast majority of these countries are in the Global South. Despite the recent boom in mineral prices, which generated billions of dollars in revenues, the populationsof these nations have yet to benefit from the industry. According to the International Council on Mining and Metals (ICMM), out of 3.5 billion people living in the 50 countries most reliant on mining, 1.5 billion are living on less than $2 per day.

With demand for metal expected to grow, there is an enormous untapped potential in promoting ’development’ through economic growth. For example, according to the World Bank, China’s demand for metal is estimated to grow 2-4 times its current levels over the next 25 years.

In the past, many countries such as the United States, Canada, Chile and Australia have driven economic and social development through mineral resource investment. In an effort to minimize corruption and mismanagement in the extractive sector, the Extractive Industries Transparency Initiative (EITI) was launched in 2002, in South Africa by Tony Blair, then Britain’s Prime Minister.

EITI was designed to increase transparency in the industry by opening up the key channel for corruption: revenue. The initiative requires companies to publish payments made to governments in exchange for oil, gas and minerals in order to discourage corruption. Governments, in turn, are asked to publish what they receive from companies.

At the core of EITI is the aim to create a national multi-stakeholder group, which would include government, industry, and civil society. The three groups of actors would participate in discussions about how to manage the wealth being generated from the extractive industry. It would open up the possibility for civil society to interact with the government, thus, promoting improved communication between governments and the people.

Mr. Dème, director of Publish What You Pay Canada coalition, argues that while it is not the solution to the resource curse and all the problems that are associated with the extractive industry, EITI is an important and fundamental step. It empowers citizens by making information publicly available .

In Chad, civil society groups have been pushing the government to publish not only the amount of money they get from mining companies, but also what they spend it on. In this case, EITI is a tool for the population to demand the government for its fair share of profits generated from mining activities.

To date, 29 of the 35 countries implementing EITI have published payments from companies to governments in EITI Reports. This represents a small step towards better governance, diminishing corruption and holding authorities accountable; for the first time, citizens will know clearly how much their government is receiving from the extraction of their natural wealth.

But what would incite countries to join rather than just pursuing business as usual?

On September 20th, President Obama announced that the United States will implement the EITI, and called on Canada to do the same under their commitment to the Open Government Partnership (OGP), an initiative for governments and civil society promoting greater transparency and open government around the world. The implementation of the EITI by the US is part of an ongoing effort to create global standards in the extractive sector.

Canada supports EITI, but has yet to fully implement it. In a report that was never made public and that was commissioned by the Canadian Centre for the Study of Resource Conflict, an independent, non-profit think tank, Canadian mining companies were found guilty of 34 percent of the incidents involving mining and exploration companies over the past 10 years.

The Canadian governmental authorities claim that EITI is a tool for development and that there is no reason for a developed nation such as Canada to comply. A major challenge for companies in Canada regarding transparency is that while there exist clear reporting mechanisms, these are established on a voluntary basis and most companies are reluctant to provide current reports for competitive reasons.

Many companies have also raised concerns regarding the standards of countries implementing the EITI, as some participant countries rank amongst the lowest on the 2010 Transparency International Corruption Index. These include the Democratic Republic of Congo and Equatorial Guinea.

It could become increasingly worrying if a democratic nation, like Canada was to uphold the status quo and refuse to join. A joint effort must be made to hold our government accountable for its actions and to lobby for implementation of the EITI.