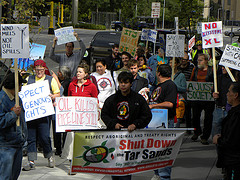 Activists rally to put the kibosh on the Keystone pipeline

The phone call to organizers was a bittersweet confirmation that the story was being carried around the continent. It came from activist Tim DeChristopher — new folk hero and symbol of the increasing risks taken by the climate justice movement, after being jailed for peacefully disrupting a land sell-off to the oil industry under the Bush administration.

Across from DeChristopher’s cell in a penitentiary in the small town of Pahrump, Nevada, where he has started serving a two-year sentence, a small television was flickering images of the protests in front of the White House in Washington, DC in late August.

What he saw was what millions of Americans saw: a parade of people getting arrested in an attempt to build pressure to block the construction of TransCanada’s Keystone XL pipeline that could carry more than one million barrels of Alberta oil daily to refineries in Texas. Splashed across the front page of the New York Times and covered by national television and radio, the protests introduced America to the Canadian tar sands, a Florida-sized ecological disaster zone that few in the country knew existed before.

The proposed Keystone XL would add another 2,600 kilometres to TransCanada’s existing Keystone pipeline, which already runs to Illinois and has spilled 12 times in its first year of operation, more spills than any other first year pipeline in U.S. history. It would endanger waterways that provide drinking water for two million people, the health of hundreds of communities along the pipeline’s path, and numerous ecologically vulnerable regions. President Obama, who has the power to veto the plan, was the protesters’ target in political messaging. As they did daily for two weeks, they stood and sat on the White House sidewalk — where it is illegal to loiter for more than a few minutes — through scorching heat and hurricane rains. It was always in solemn formation, dressed in suits and ironed shirts, sleek tops and dresses, counseled by organizers to look as if protesting were "serious business." They held carefully painted anti-pipeline banners, the first items to be confiscated by city park police. One-by-one, they were arrested and escorted to police vans, which as numbers grew become trucks and eventually buses.

Supporters huddling behind police barricades shouted one "thank you" after another. Civil rights anthems like "We shall not be moved" resounded through scratchy megaphones, lyrics adjusted to suit this latest struggle that has begun moving toward large-scale civil disobedience. The people sitting-in reached into the hundreds on Friday and Saturday, stirred by anger that Obama had abandoned new air-quality regulations under pressure from industry, and as they marched they stretched through the park plaza behind President Obama’s residence. Direct action is an art, the practice of deftly deploying bodies to heighten the drama of injustice and to foreshadow the harmony brought about by injustice’s resolution. This instead was ritualized protest, likely the most certain political method to get oneself arrested in America. But what the action lacked in strategic logic, confrontation or disruption it seemed to make up through the power of moral witness in sheer numbers — by the end, 1,252 people had been arrested. And it was diverse (in every respect save race), including scientist James Hansen and author Naomi Klein, landowners and farmers, grandmothers and college freshman, former Obama campaigners and young radicals, filmmakers and celebrities, and religious and Indigenous leaders.

At nightly trainings in the basement of a central Washington church, the transformative mood of the moment was palpable. Scores of people squeezed together closely, listening to trainers mostly from the direct action group Ruckus Society guide them through the principles of the action.

Why were they there? They had seen the horrors of the oil spill in the Gulf. They lived the impacts of mountaintop coal removal in West Virginia. They sucked on exhaust every morning biking to work in Boston. They had just been flooded out of their home in New York. And Jeannine from the Midwest had watched years go by while the Congress did nothing. Diane from Maine felt deeply how all the options for renewable energy were being ignored. For Val, democracy was not a spectator sport. Ryan from Oakland finally decided to do something about it.

These Americans — the overwhelming majority of whom had never before risked arrest — were taking crucial first steps in rejecting official channels of dissent and developing the kind of civic rebelliousness that will be needed to stop the Keystone pipeline and reverse the political course set by their governments. And it was a positive, though still precarious, development that all the big U.S. green organization’s leaders, hardly known for their militant gestures, issued a statement mid-way through the protests declaring that there was "not an inch of daylight" separating them from the protesters at the steps of the White House.

Trainers like Joshua Kahn Russell were buoyed by the energy and hope of people emerging from the detention centre, where arrestees were processed within a few hours on the same day, near the outskirts of Washington. He greeted Mary, a grandmother in her sixties from Georgia, whose first words as she emerged from jail were, "I want to do this for the rest of my life." According to Russell, many quickly embraced the philosophy of direct action. Others who were already familiar in deed with this tradition learned that thousands were with them, and left for home reassured in their stance. A group of grandmothers from Montana, who came to Washington confident enough to be arrested through a sit-in, left emboldened enough to lay their bodies down in front of bulldozers, if the time came for it. Such energy will bode well as the public hearings for the pipeline launched by the U.S. State Department begin in September. In the midst of the protests, the State Department had approved the pipeline in its final environmental assessment, despite a contradictory position of the Environmental Protection Agency, which laid out concerns about carbon emissions, leaks and other environmental repercussions ignored by the State Department.

The mass of people who participated will now fan across North America, introducing family and neighbours, friends and colleagues to new ideas and possibilities for action, widening the circle of political defiance. Could the action of the past two weeks be the trigger that every social movement requires before it is born into a mass current? It is too soon to tell.

Those among the protesters for whom climate change was still an abstract moral challenge had a chance to hear from those for whom it is least so — the Indigenous communities who have been hurt first and worst by climate change and big oil. The Indigenous Environmental Network (IEN) organized to bring in impacted First Nations from Canada who led the Indigenous-themed day on September 2.

Ron Lameman, of the Beaver Lake Cree First Nation in Alberta, spoke about what it is like for a community to live in the midst of tar sands industrial development. "Where I live the earth is too beautiful and too thick to just remove," he told the crowd gathered near the White House, describing the energy-intensive "in-situ" method that involves injecting steam into the earth and boiling the tar sludge to extract oil.

Gitz Deranger, Dene from the village of Fort Chipewyan in Alberta, spoke about the toll on people’s health. "I have seen the devastation of our environment. You destroy the environment, your destroy who we are as Indigenous peoples," he said.

He described growing up in Fort McMurray — as he put it, "ground-zero" of the tar sands — and the pain of watching friends, relatives, or acquaintances succumb to rare cancers. "What you guys are doing is courageous and beautiful," he said to people preparing for the sit-in. "But let’s keep that serious and solemn tone. To honour the people who have died. The young ones. The people who are at risk along the path of the pipeline."

As media attention picked up over the two weeks, oil companies took to the airwaves to defend themselves, baying about the dangers of reliance on foreign oil. "The U.S. has a decision to make, [d]o they want to import oil from Canada or get conflict oil from OPEC nations?" asked Robert Jones, a spokesperson for TransCanada, on August 25.

However, in a report released this week, Oil Change International revealed that the pipeline would almost certainly not be feeding U.S. drivers’ car tanks, but markets in Europe and Latin America.

The Obama administration will now have to make a final decision on the pipeline by the end of this year, after it determines whether the project is in the U.S. "national interest."

The next steps in the movement against the Keystone pipeline XL may require some rethinking. The strategy of appealing to Obama, and insisting that the Democratic Party will lose its active environmental base unless Obama blocks the pipeline, may be based on faulty political and electoral calculations. There is no indication that moral appeals will change an agenda that has seen Obama approve drilling in the Arctic Ocean, open up 20 million more acres of the Gulf of Mexico for oil leasing, and delay several major air quality regulations. And to whom exactly would the environmental vote go-the climate-deniers at the head of the Republican leadership race?

A more likely route of success may involve also focusing attention on the private and institutional financiers of the pipeline project and non-violently targeting the infrastructure of fossil fuel pollution, creating such an increase in fees, cost over-runs, delays and political headaches that its supporters will end up finding the project much less appealing.

And while the new people drawn into the campaign are certainly craving more action, they are also craving more say in decision-making. The growing forces in U.S. and Canada confronting big oil and the tar sands would do well to revive the deeply democratic models forged by some of its successful predecessors. The anti-nuclear energy movement saw thousands arrested in mass civil disobedience to prevent the construction of nuclear reactors-and they did it, during the occupation of the Seabrook nuclear site in 1977, using mass consensus based decision-making and affinity groups. These then spread quickly across the country, forging a truly grassroots national movement that busily worked at the local and regional levels to shut down or prevent new reactors from being built.

But in the moment of action and recovery, any strategic criticisms were stilled. As arrestees from the second last day of action gathered outside the detention centre they formed a circle and Gitz Deranger offered a prayer and a hopeful promise.

"We’ll never have another day like this one, just like this one, when just these people came together and accomplished something together. But we can meet again in action."