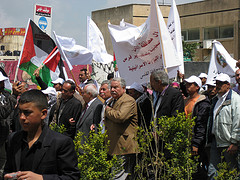 A Voice From Within Palestine

As the director of the Teacher Creativity Centre (TCC) in Palestine, Sabbah collaborates with Alternatives Montreal on local projects in the West Bank that include raising awareness about the Palestinian issue amongst educators and students alike. The Alternatives International Journal (AIJ)’s Hiba Zayadin interviewed Sabbah to find out about realities on the ground in the wake of the Palestinian Authority’s historic move at the UN, which saw Mahmoud Abbas reach out to the international community for the formation of a Palestinian state.

AIJ: Mr. Sabbah, tell us briefly about yourself and your work with Alternatives.

Sabbah: I live in Ramallah and am the founder of the TCC, a not-for-profit organization that promotes a democratic and educational environment. The centre has been operating since 1995. The main aim of the centre is to increase solidarity with the Palestinian plight.

AIJ: In the months leading up to the UN vote, what were some of the activities you planned to further your cause?

Sabbah: We typed up a petition signed by a million educators in support of the UN bid. The petition concentrated on the fact that things won’t be over once Palestine gets to the UN with its request, but that the serious work begins after the UN showdown. We also prepared activities aimed at schools in the West Bank to raise awareness about the issue amongst students. The youth of our country needed to understand what the bid included, what the UN does, what this all means to Palestine. We seized the opportunity to educate students about the state of Palestine now and where we’re heading. We didn’t stop there either. The general population needed preparation in order to face the consequences of this bid soundly and peacefully. We wanted to encourage the people to protest or to celebrate peacefully because, from past experience, violence never gets us anywhere. We are also attempting to help form a peaceful popular resistance.

AIJ: What was the general sentiment in the occupied territories in the past months?

Sabbah: There were two apparent perspectives being adopted by the people in the West Bank and Gaza. One was of overwhelming support of the bid, where people considered it a definite benefit for Palestine. People didn’t think it would affect the right of return of refugees or that it would harm Palestine at all.

The opposing view was largely within the framework of Hamas, where people doubted the honesty of the PA in reaching out to the UN and the validity of its request. These people didn’t believe that the consequences of the bid will be fruitful in any way either. Things were also being handled differently in the West Bank and Gaza. Prior to approaching the UN, the atmosphere in the West Bank was one of jubilation, celebration, and hope. People were given the choice to decide whether they wanted to be with or against the bid, and the majority was being supportive out of belief in the move, not because of intimidation or force. In Gaza, the situation took another turn. Celebrations were suppressed, people weren’t allowed to bring up the subject. It was really unfortunate as this bid affects all Palestinians and those in Gaza have the right to know what was going on and how, or if, life for them will be changing.

AIJ: So, how did the people react when Abbas took to the podium and delivered his speech?

Sabbah: Right before Abbas began to present his request, there was such a strong undercurrent of excitement that pulsed through the West Bank and even Gaza. Every child, every elder, every Palestinian was glued to a TV screen waiting on Abbas’ words. As they listened intently to Abbas addressing the international community, I actually saw people cry. They felt like Abbas actually expressed all their worries, their aspirations. His speech satisfied their egos, helped reclaim their dignity. He told the story of the Palestinians to the world, the story they themselves had wanted to scream out. Every Palestinian was able to relate to that speech, patriotism was at its peak. Even though people were aware of the symbolic and theoretical aspect of this move, even though they knew things wouldn’t change in a day and night, they felt hope re-enter their lives. What we all loved about Abbas’ speech was that it wasn’t a plea, he didn’t play the role of victim, rather, it was dignified and proud. We all know and admire the poet, Mahmoud Darwish, and Abbas quoting him was just perfect for the moment. “You won’t break us, you won’t defeat us, here we will stay, this is where we’ll always be,” he said.

AIJ: Has there been any reaction from Israel on the ground?

Sabbah: Yes, of course. The Israelis are feeling pretty worried about this, they’re on edge. The IDF has given permission to settlers to use violence at their own discretion. The settlers have been harassing Palestinians living nearby, they have been intentionally provoking them. Some have thrown stones at passing cars, some of our women have even been hit. It seems as if they’re trying to push the Palestinians towards using violence in order to prove a point to the international community. But hopefully, we won’t budge. The Arab Spring has affected us, in that it showed us results can be attained through peaceful uprisings. We are not ready for another intifada, we are ready for a Palestinian Spring. Israeli attempts at eliciting violence must go unheeded. What is most important now for Palestinians worldwide is peace between the different Palestinian factions, especially between Fatah and Hamas.

AIJ: Do you think Palestinians have regained their trust in other Arab countries?

Sabbah: I would like to think so, yes. After all, we have benefited tremendously from the uprisings in the rest of the Arab world. We have gained the most out of the Egyptian revolution. Israel is feeling more isolated now, the surroundings have changed. There is anger across the Arab world targeted at the US and the stance it took in all this. Palestinians and Arabs alike feel betrayed by Obama’s broken promises and his partisan position. The main reason why Palestinians support this bid for statehood is that they believe it will remove their case from US hands and place it under the auspices of the international community. Whatever the outcome, people have been rejuvenated and have regained hope, just through the initial act of approaching the UN, and I think that is a good thing.