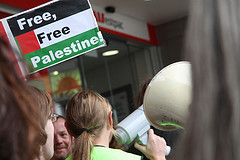 Symbolic Or Not, Palestine Deserves It

Palestinians have found themselves propelled onto the world stage in the past month as Palestinian Authority leader Mahmoud Abbas seeks United Nations recognition of an independent state.

Abbas’ move to engage the international community in realizing the Palestinians’ right to statehood stems from 20 years of failed attempts at peace negotiations with Israel, which has been and still is, adamant to move forth with illegal Jewish settlements in the West Bank. There has been a myriad of articles and opinion pieces in the mainstream media attempting to explain the consequences of such a move for all the parties concerned. However, it is worth considering that by just approaching the UN, the PA has edged closer towards the realization of their demands than all previous efforts at the negotiating table; the Israeli-Palestinian issue is on the international agenda more than ever before.

Whether the bid ends up improving realities on the ground or not—and I doubt it will—its repercussions will be felt across the Arab world, Israel, the US, and the United Nations in the coming months. Hence, the editorial team at the Alternatives International Journal feels it is appropriate to dedicate the October 2011 issue of the journal to the Palestinians’ struggle for statehood. Articles in this month’s journal include an interview with Rifaat Sabaah, director of the Teacher Creativity Centre in Palestine, an article on the US perspective in relation to the bid by Marion Bauer, and a reprinted opinion piece by Robert Fisk on why the Middle East will never be the same. As for me, I shall write about the UN’s role in all of this.

I used to have faith in the UN’s power to fulfill its mandates, to reach its stated aims, which include facilitating international security, economic development, social progress, human rights, and the grandiose achievement of world peace. I don’t anymore—not after the political showdown we witnessed in the past weeks over the Palestinians’ simple request for a largely symbolic form of statehood.

On Friday, Sep. 24th, people across the world tuned in to news stations to watch the Israeli and Palestinian leaders argue their cases before the 193 nations that make up the UN’s General Assembly.

It was clear which leader the audience had greater sympathy for. When Abbas presented his application for statehood, he was met with applause from scores of supporting envoys. Netanyahu’s speech was met with much less enthusiasm and yet, though the Palestinians may have won the popular vote, the Israelis will likely win the battle over UN membership.

News Dissector Danny Schechter wrote in an opinion piece for Al Jazeera English, “If you are looking for a democratic United Nations, this is not it. The peoples of the world in whose name the UN was consecrated have no real role, except as spectators on the official tour.”

All that the General Assembly drama seems to offer is a podium for US presidents to patronize other countries while attuning to domestic public opinion. President Obama’s reaction to the bid was influenced more by the fact that it is an election year, than by his concern for Palestinians’ plight or his commitment to Mideast peace.

After all, powerful countries control the world body, and powerful lobbies control those powerful countries’ politicians. And so it is that the UN, where so much faith has been invested, has hit the skids as a medium for advancing Mideast peace. Despite the billions of dollars invested and the scores of ineffective resolutions passed during 60 years of Israeli occupation, we have yet to move forward.

What is most unfortunate about this attempt at UN recognition is that Palestinians will have to face yet another disappointment in their arduous journey towards regaining a homeland. While criticism regarding the conditions of the bid and Abbas’ rule exists amongst Palestinians, the PM was still met with a jubilant crowd as he returned to the West Bank after submitting the application. Despite their insecurities and skepticism regarding the success of such a move, people in the crowd portrayed an unyielding sense of hope towards the realization of a Palestinian state.

Only a few days after Abbas gave his passionate speech, Israel boldly approved the construction of 1,100 Jewish homes on Palestinian soil in southeast Jerusalem. And the public asks why the peace process was never successful! This move by Israel tops all the arguments one could use to prove their lack of respect for their neighbours and their unwillingness to grant Palestinians a dignified life and a rightful state.

According to Ron Prosor, Israel’s UN ambassador, the Palestinians are using "every pretext in order to find a reason not to go into negotiations."

But wait a minute... I don’t think the Palestinians need to use any pretexts, they have a legitimate reason. In fact, they now have 1,100 legitimate reasons to halt negotiations and to instead approach the UN.

The UN council has pushed back a decision on the Palestinian membership bid in an attempt to revive peace talks with Israel. They say it may take weeks before a verdict is reached. I say it will take weeks, maybe months, if Israel remains defiant and disrespectful to its neighbours and the international community as a whole.

In order of appearance: Photos courtesy of Kate Ausburn and MRegis (flickr)