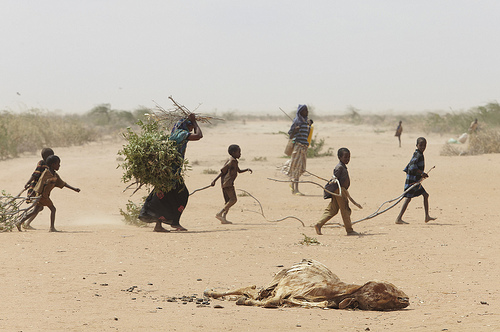 Somalis have once again found themselves fleeing starvation, drought, and conflict. Thousands of Somalis with washed-out ribs and blown-up empty bellies roam their country in search of aid. According to the UN, 10 million people are currently on the verge of starvation. The horn of Africa is facing yet another brutal famine.

It all sounds disturbingly familiar. Haunting images of hunger-stricken children bombard our TV screens on a regular basis. The images we see today are carbon-copies of those from 1992. Why is this tragedy a recurring phenomenon? Yes, the drought is a main cause but this famine is as much human-impacted as it is instigated by climate. Conflict between different factions in Somalia is the reason behind so many unnecessary deaths. Conflict is what turns hunger into famine.

Journalists now, similar to their predecessors 20 years ago, rush to point fingers of blame in Somalia’s direction. The term ‘failed state’ has been used tirelessly in explaining Somalia’s suffering. But what advantages stem from labelling a country as failed? How are Somalis affected by constantly having their country being referred to as a state of lawlessness—a failed state?

Somalia first landed within the confines of the term “failed state” in 1991 when President Mohammed Siad Barre was overthrown, marking the implosion of the state.

During Siad Barre’s reign, Somalis witnessed the gradual collapse of their country. He promised them an end to corruption, but instead succeeded in destroying any semblance of national government legitimacy. Backed by the Soviet Union and then by the United States, Siad Barre managed to destroy institutions of both government and democracy. At the outset of civil war in 1991, many would argue that the Somali state had long since failed.

Let’s first start by examining the origins of the term “failed state” and what marks a country as failed. Since 2005, the United States think-tank and the Fund for Peace publish an annual index called the Failed State Index.

The term “failed state” is often used to describe a state perceived to have failed at some of the basic conditions and responsibilities of a sovereign government. Several attributes characterize a failing state; one of the most common and the one that most aptly applies to Somalia is the government’s loss of physical control of its territory. In Somalia’s case, although an interim government was created in 2004, other regional and local governing bodies continue to exist and control various regions of the country, including the self-declared Republic of Somaliland in northwestern Somalia and the semi-autonomous State of Puntland in northeastern Somalia.

The Transitional Federal Government’s control over the country is, at best, unstable. Its rule is constantly being undermined by radical Islamic groups such as Al-Shabaab, which controls areas in South Somalia. Those areas have been struck hardest by the famine as Al-Shabab continues to impede efforts by international aid agencies to reach suffering citizens.

Failed states cannot ensure economic stability or any reasonable distribution of social goods. Somalia’s rate of unemployment is unknown and it has very few skilled labourers. In fact, according to the CIA World Factbook, quite a few economic figures normally used to measure economic health are unavailable for Somalia.

All these indicators point an accusing finger in Somalia’s direction. However, the declaration that a country has ‘failed’ is generally controversial and may lead to significant geopolitical consequences.

One may argue that labeling a country as such helps signal to the rest of the world that the country is much in need of assistance. But, as any careful reader of newspapers can discern, the international community has not, so far, proven to be particularly adept either at staving off state failure or at reconstituting failed states. Foreign states have played a central role in Somalia during the past two decades and in some cases that role has been destructive. The international community has veered between intense engagement with, and complete neglect of the country’s problems.

The key event that led to the abandonment of Somalia to – as an overwhelming majority of North American and UK media labeled it – a ‘state of lawlessness’ took place in 1993. From 1992 to 1995, a massive UN peacekeeping operation attempted to restore peace and to secure badly-needed humanitarian relief to Somalia. The intervention ended in total failure, brought on in part when US troops fought militias in the streets of Mogadishu, killing hundreds and losing 18 US Rangers.

In order to convey the effects this event had on US foreign policy, mentioned below are some quotes by US officials after the incident took place. The Somalis responsible for that act, said the Republican Senator Phil Gramm at the time, in a widely quoted remark, “don’t look hungry to the people of Texas,” referring to the gunmen and completely ignoring the millions of victims. Former President Bill Clinton said, “I’m just not going to have those kids killed for nothing”—and by “kids” he meant American soldiers, not Somali children.

The repercussions of this incident were so severe that according to an ABC News poll in1993, four out of five of those backing a U.S. withdrawal favored it even if that resulted in another famine. And so, Somalis were left to fend for themselves. The shock of American casualties quelled any desire among Western powers to further intervene.

Somalia’s tragic history paints an ugly picture of the country. The outside media’s coverage of its situation over the years helped solidify this image of a failed, chaotic state unable to support itself, drowned in corruption. In his essay, Politics of Recognition, Charles Taylor, a Canadian philosopher, wrote, “Our identity is partly shaped by recognition or its absence. The misrecognition of others. A person or a group of people can suffer real damage, real distortion, if the people or society around them mirror back to them a confining or demeaning or contemptible picture of themselves.” He went on to explain that with the passing of time, people unintentionally could internalize “a picture of their own inferiority”.

The transitional federal government’s current president, Sharif Ahmed, has argued in an article published in the Guardian in March 2010, that Somalia is not a failed state. “Somalis are resilient and committed to peace,” he wrote. He called on the international community to adjust its way of thinking, saying that “it must abandon the defeatist notion that Somalia’s problems are insuperable, because this becomes a self-fulfilling expectation.”

What then must be done to prevent Somalia from fulfilling that expectation? Usually, when we perceive of something as failing or deem that something has already failed, it logically follows that we try to fix it, not change or replace it. The Failed States Index aims at explaining what ‘normal’ states experience and what constitutes a ‘failed’ state.

Applying those terms to Somalia leads to a series of assumptions about the country’s situation and how to fix it, all of which are based on pre-defined, strictly conventional notions of what a properly functioning state should be. However, Somalia’s reality provides a complex challenge to those notions. As mentioned earlier, there exists in the north, two functioning, state-like entities, Somaliland and Puntland, which have evolved as a result of Somalia’s lack of government, while southern and central Somalia is still marred by violence and anarchy. So labelling the whole of Somalia a ‘failed state’ would be inaccurate, at best.

The West’s response to Somalia’s constant suffering has been largely ineffective and at times counter-productive. Maybe it is time to seek novel and alternative approaches targeted particularly towards Somalia’s situation. Maybe Somalia could flourish under different rules and in a different setting.

An article in the National Geographic provides examples of how Somalis have managed to survive and build on their own. One Somali businessman is quoted as saying, “Once there was no government, there was opportunity!” The article goes on to mention examples of businesses that have been flourishing in Mogadishu and elsewhere. The reporter then further probes into the matter asking the obvious question: where does all the money to support the economy come from? "We live off the international community—of Somalis,” explained another business owner. There are more than a million Somalis living and working throughout the world. These expatriates send back as much as 700 million dollars a year.

According to Sandra Adong Oder, Senior Researcher at the Peace Missions Programme at the Institute for Security Studies, regional and community-level initiatives do exist in Somalia. “In recent times, what has emerged along the coast could be likened to a loose bunch of city-states, where, for example, in Mogadishu, business interests are a key factor in interactions,” she wrote.

So, instead of trying to re-build Somalia as a state, it is high time to start considering a different approach by encouraging and further developing African-based grassroots initiatives and recognizing the legitimacy of alternatives to traditional “state” activities.