Home > English > Alternatives International Journal > 2011 > October 2011 > Till Death Do Us Part: Re-thinking a US- Israeli Relationship 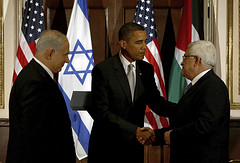 Till Death Do Us Part: Re-thinking a US- Israeli Relationship

On September 23rd, the United Nations General Assembly was set to vote on the resolution that would recognize the Palestinian occupied territories as a state, and give it full observer status in the UN. If this resolution passes, it would give additional leverage to Palestine when it returns to the negotiating table with Israel. However in reality, this will be little more than a symbolic vote.

In the lead-up to the vote, broad-based support for Palestine built up fast. One country remained defiant, however, and that was the United States. The US still remains Israel’s strongest supporter and has vowed to veto the Palestinian bid. While the US is outwardly acting in Israel’s interest, the vote has indeed placed a strain on US-Israeli relations as well as on the US’ position as a world leader.

As Israel’s most important ally, this is not the first time the US is caught in the middle of an Arab-Israeli conflict. Earlier this year, the US was forced to veto another resolution calling the settlements in Gaza and the West Bank illegal, while all 14 other countries at the UN Security Council voted in favour. It is important to note that while the US has publicly denounced Israeli settlements, when it comes time to vote against Israel, the US falters, and maintains its historic loyalty to the country.

The vote, this time, would not have meant placing economic or military sanctions against Israel, but is simply a symbolic vote, showing that the support of the US to Israel is not unconditional. Though the US has stated that the UN is not the appropriate venue to make such decisions, voting in favour of the resolution would have shown Israel that the world will not be complicit in Israel’s occupation.

President Barack Obama believes that the Palestinians’ request for statehood will only impede peace negotiations, which, he says, should take place outside of the UN. However, he has his own precondition for the negotiations; that is, to start peace talks, while taking into account pre-1967 borders which excluded the Gaza Strip, the West Bank, Golan Heights and East Jerusalem. Such a statement did not come without controversy though. The Israeli Prime Minister, Benjamin Netanyahu, spoke out strongly against this idea to the media, stating it would make Israel’s boundaries much smaller than they are today.

If the Israeli government wants to act in the interest of the country, it should be wary of criticizing the Obama administration, which has made a considerable effort to lobby world leaders into opposing the UN bid. Even within the US, Obama is being challenged. Many in Congress do not agree with his pre-1967 conditions, arguing that Obama should not place limits and premature parameters on the peace process — in other words on Israel. Of course, in an election year, Obama cannot risk angering powerful lobbies.

Since the introduction of this bid to the UN, it was clear that the US would veto the proposal once it came before the Security Council. This has obviously put the US in an tough position on the international stage. While Obama has spent considerable time lobbying European countries to vote against the Palestinian bid, his success at doing so is largely questionable. This will, therefore, serve not only to isolate Israel but the US as well. After the US’ economic struggle and its recent credit downgrade, it has been losing its status as global leader and exemplary model. This is clearly demonstrated through Obama’s failure to convince the leading European countries – France and the United Kingdom to follow its lead.

Currently, the Palestinian Authority is aiming for what they have called ‘a moral majority’ that is, the votes of nine Security Council members. Faced with this moral majority, the US will use its veto in order to prevent the resolution from passing; a situation it would prefer avoiding. However, if it comes down to vetoing, the resolution would then be introduced to the General Assembly, where it is expected to pass with a large majority.

The US stance on the UN vote for Palestinian statehood continues in the tradition of US loyalty to Israel. The US’s actions continue to negate its promises: It has publicly criticized Israeli settlements and yet refuses to deem them illegal; it has insisted on the need for a Palestinian state and yet has vowed to veto the bid for statehood at the UN. In light of a shifting political climate in the Middle East and mounting international pressure in support of Palestine, the US could be digging itself into a deeper hole.