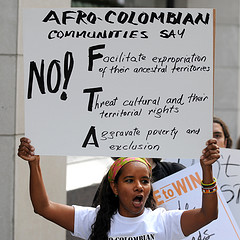 Free Trade and Military Aid: Is Colombia the Israel of the Andes?

Canada beat the U.S. to it—the Canada-Colombia Free Trade Agreement (CCFTA) entered into force on August 15, 2011 despite widespread concerns over the morality and transparency of the agreement. A nearly identical trade agreement between the United States and Colombia remains halted in the U.S. congress due to the controversy over Colombia’s record of human rights abuses. Contrary to the common myth of Canada as a peacekeeping nation, the Conservative government’s current relations with Colombia exemplify an intimate connection between free trade and military aid. Together, these imperialist tactics act to transform Colombia into a so-called Israel of the Andes.

The CCFTA: Trampling on Human Rights

Shrouded in secrecy during a year and a half of negotiations, the terms of the CCFTA were decided behind closed doors and the text released only in November 2008. Without proper parliamentary involvement, and despite outright opposition to the deal on the part of many Canadian and Colombian civil society organizations, Canada and Colombia have pushed full force ahead with the deal.

According to Making A Bad Situation Worse: An Analysis of the text of the Canada-Colombia Free Trade Agreement, the deal presents cause for grave concern over development and humanitarian issues, namely in the areas of labour rights abuses, extractive industry investment, agriculture, and the environment.

Colombia is the world’s most dangerous country for trade unionists. According to Colombia’s National Labor School, as of October 2010, 2,860 trade unionists had been murdered since 1986; this is more in one country alone than in the rest of the world combined. Of these, only six per cent of cases have resulted in convictions, suggesting a 94 per cent rate of impunity. (1)

The government is intimately linked to the paramilitary activity related to these and countless other murders. Seventy-eight current and former members of the Colombian congress have been identified by the Colombian Supreme Court as having ties to paramilitary groups (2). As just one example, ex-intelligence officer, Jorge Noguera, has recently been convicted of collaborating with paramilitary death squads; he was sentenced to 25 years in prison for his implication in the murder of a prominent sociologist (3).

Canadian oil and mining companies are well established in Colombia, especially in conflict zones where paramilitaries have gained control and people have been forcibly displaced. One of the biggest, Enbridge, owns a quarter of the OCENSA oil pipeline which spans over 800 kilometers and is guarded by over 1,400 members of various military units, with ties to paramilitary groups (4). Despite the evidence of such links, the investment chapter of the CCFTA gives the green light to extractive industries—in greater numbers and with fewer legally-binding restrictions—to set up shop in conflict regions.

The CCFTA replicates a typical neo-colonial North/South relationship: overall, Canada is a net importer of agricultural and extractive industry products and a net exporter of manufactured goods. The exception to this is Canadian government-subsidized agricultural products such as wheat. As barriers to trade are removed under the CCFTA, cheap Canadian agricultural products are likely to be sold in Colombia at unbeatable prices. As NAFTA’s has demonstrated with corn in Mexico, free trade of Canadian wheat will have a devastating effect on local agriculture, jeopardizing food security and the livelihoods of approximately 12 million country-dwellers (5).

The free trade model will also encourage mono-crop production of agricultural products desired for export. The fastest growing agricultural sector is the African Palm, used to satisfy growing market demand for biodiesel. African Palm is cultivated in areas controlled by paramilitaries who have committed massacres and led forced displacements of Afro-Colombian and Indigenous populations.

While investor rights are enforceable, the Environmental Side Agreement (ESA) to the CCFTA has no mechanism to require compliance with environmental regulation. Under the CCFTA’s preference of investor rights over environmental protection, Colombia’s biodiversity will likely be hard-hit by extractive industries such as logging, mining, and energy development that are largely responsible for rapidly growing deforestation in the country.

“We are a free and democratic society. We are not an imperial power-we never have been… Canada will provide leadership and assistance in the Americas. You can count on Canada and Canadians to work with our neighbours to help improve the lives of people and families throughout the hemisphere." (6)

This was the promise made by Minister of International Trade David Emerson, at a 2008 conference entitled “Re-Engaging the Americas through Trade and Investment.”

The quintessential Canadian myth: “We are not an imperial power-we never have been.” What, if not imperialist, is a free trade deal coupled with military aid? While the CCFTA has received some media attention, what has slipped discretely under the radar is Canada’s strengthening military ties with Colombia.

At the same time of the passing of the FTA, Canada admitted Colombia into the 2011-2014 cycle of the Canada Military Training and Cooperation Program (MTCP) (7). This program trains approximately 1,000 military personnel annually from more than 62 member states. The program runs on an annual budget of approximately $17 million. This budget can be compared with the $5 million annual budget for Canada’s Global Peace and Security Fund (GPSF). Investing more than three times in military training than it does in peace-building, it is clear where Canada’s priorities lie. It should be noted, though, that this comparison by no means suggests that Canadian initiatives for peace and security in Colombia should not also be challenged.

Another indication of tightening military ties includes the increase in the value of Canadian military goods exported to Colombia in recent years. According to the government-published Report on Exports of Military Goods From Canada, in 2003, Canadian military goods exported to Colombia were valued at $629,400. In just six years, this figure jumped to more than 12 times its value, or to $7,615,748 (8).

Canada is providing military support—in the form of military training and military goods exports—to a corrupt and criminal government. History has shown that there is no guarantee that these resources will not be used against Colombian civilians.

A pertinent example of such abuse is the ongoing “False Positives” scandal. As early as 1994, the CIA produced an intelligence report stating that Colombian security forces “employ death squad tactics in their counterinsurgency campaign” and had “a history of assassinating leftwing civilians in guerrilla areas, cooperating with narcotics-related paramilitary groups in attacks against suspected guerrilla sympathizers, and killing captured combatants” (9). In an effort to inflate the “body count” as a measure of progress, the Colombian army extra-judicially murdered civilians and then tried to pass them off as guerrillas killed in combat. For a job well done, army officers were granted promotions. The investigations around these “False Positives” cases have been conducted internally, with few legal consequences for perpetrators (10).

As if Canada was not already at a considerable advantage, providing military aid to Colombia will further reinforce Canada’s interests in the CCFTA and deepen Canada’s implication and responsibility for the human rights abuses in the Andean country.

Colombia: The Israel of the Andes

In response to the 2008 illegal Colombian attack on FARC guerrillas in Ecuador, Venezuelan President Hugo Chavez called Colombia the ‘Israel of Latin America.’ This parallel is a useful one that points to similarities between Canadian and American political, economic, and military influence in both countries.

Canada and the U.S. maintain Colombia and Israel as “allies” in regions of interest where allies are scarce. Surrounded by left-leaning socialist governments, Colombia serves as a puppet state to pressure American and Canadian interests in Latin America. In parallel, Canada and the U.S. strategically maintain their presence in the Middle East, surrounded by oil-rich Arab neighbors unsympathetic to American imperialism. The Israeli lobby is extremely powerful in Canada and the U.S., and serves to push for Zionist foreign policy in both North American countries.

Drawing connections between similar patterns of political and economic control is an effective tool for naming imperialism. Often, though, where there is domination and exploitation, there are also currents of resistance. The Arab Spring and indigenous and socialist movements sweeping Latin America are two examples of resistance gaining power as part of a global challenge to imperialism.