How trustworthy is Anna Hazare?

A response to Arundhati Roy’s opinion piece: “I’d rather not be Anna”

Anna Hazare, Arundhati Roy, and other Indian activists hold a common factor in their diverse diagnoses of India’s main problem - corruption. The source of this corruption and how to treat it is what these individuals disagree on.

Corruption in India permeates through its entire society—from petty cash demanded by street vendors, to the bribed blind eye turned routinely by politicians, the unaccounted expenditures of government officials, and frauds such as those exposed at the 2010 Commonwealth Games in Delhi. According to Transparency International’s corruption index, India ranks 87 out of 178 countries, US $19 billion leaves the country each year, and in 2010, 54 per cent of households paid large amounts in bribes for essential public services.

The prevalence of fraud is often blamed on a total lack of transparency in regards to government activity, allowing large amounts of money to leave the country constantly instead of reinvesting in the Indian economy. This, in turn, causes the need for small-scale corruption for everyday survival. Thus, the standard of justice is set at the level of extortion, and politicians indirectly encourage citizen bribery by providing a successful example.

If one were to recognize the lack of governmental transparency as the cause of these ubiquitous practices, a logical remedy to treat this would be the implementation of an ombudsman. This, precisely, was the demand of social activist Anna Hazare in his April and August 2011 campaigns, as he demanded activation of the Jan Lokpal Bill. A modification on the original Lokpal Bill, proposed and rejected eight times by parliament since 1968, Hazare’s bill broadened the scope of inquiry to include the previously exempt prime minister, judiciary, and all public servants; and included an increase in investigatory power as well as the right to directly impose penalties. 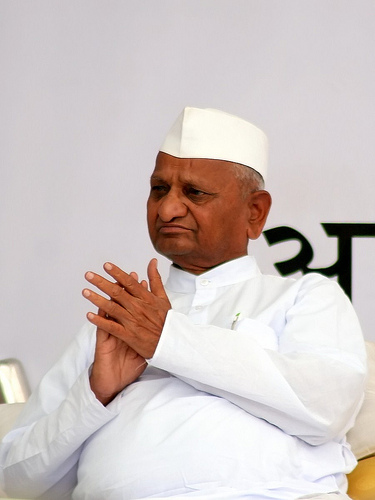 Hazare not only champions the concept of a watchdog, which is in compliance with criteria found in the UN’s Convention on Corruption, and is in accordance with India’s 1988 Prevention of Corruption Act.; he propagates the proposal through the means of a Gandhian hunger strike. Insisting on his demands through this non-violent crusade, Hazare has gained the support of the middle-class, who have joined his efforts and promote it in contrast to current Middle Eastern and North African violent revolts, as well as domestic Maoist rebellions or Hindu nationalist terrorism.

If the problem lies on the surface and is embedded in a government body gone awry, it follows that Hazare’s campaign could hold potential for a solution, and simultaneously employ a sound way to actualize it. Nevertheless, if the issue lies at a deeper level, perhaps Hazare’s Jan Lokpal proposition is merely another element of the problem, and as Arundhati Roy has demonstrated, feeds into the injustice entrenched in the entire structure of society.

While Hazare fights for political accountability, his struggle simultaneously excludes an investigation into the makeup of the same government body, blindly accepting its inherently problematic constitution. The Jan Lokpal Bill, by disregarding these fundamental issues, allows for power to remain concentrated with the small group of elites and for a perpetuation of their hegemonic control over the masses, inserting simply another bureaucratic hurdle for citizens to deal with- “two oligarchies, instead of just one,” as Roy claims.

Moreover, by solely scrutinizing members of parliament, the Jan Lokpal Bill ignores the corrupt activities of large corporations and NGOs, who are equally guilty of the allegations. As Hazare’s ombudsman will cause the withdrawal of government involvement in its conventional duties, these services will consequently be taken over by the private sector, who, free from watchdog limitations, will expand, seize more control, and remain unchecked.

Is Anna Hazare paving the way for further neo-liberal reforms under the innocent guise of satyagraha (non-violent resistance)? Arundhati Roy argues that this is the case, and if it is so, another antidote must be found.

If it is agreed that peaceful civil disobedience, in the form of a Gandhian hunger strike is the most efficient and moral of protests, perhaps Hazare’s demands ought to be extended towards a more Gandhian end. With the popularity he has established for himself, Hazare could persist with his demands; increase the scope of his watchdog body to include others capable of corruption such as mushrooming corporations and NGOs; and use his momentum to redirect his critique towards society’s unbalanced structure and threatened privatization.

Nevertheless, if Hazare remains adamant about the righteousness of his position, or if an ombudsman is not accepted as the cure to corruption, it would be up to the media—as a watchdog and a mobilizing force—to get involved more confidently and to push the budding revolution towards treating its source.

As Roy has said, attention must be directed at the 830 million people living on 20 rupees a day, which is equivalent to US 40 cents: What benefits them ought to be considered, and their voices must be heard. The current Jan Lokpal Bill keeps them locked in an unjust system, it will not solve the corruption they continue to struggle with, and for as long as it remains, bribes will go from government hands to private ones.

A redirected movement must therefore ensue, exposing the ironical lack of transparency in the movement fighting for just that, and the majority of the Indian population must be accounted for.

In order of appearance: Photos courtesy of Dainis Matisons and Ramesh Lalwani