Sisterhood of the Sluts

On January 24th, 2011, Constable Michael Sanguinetti, spoke at a crime prevention conference at a Toronto law school. He dared to say, “…women should avoid dressing like sluts to avoid being victimized.”

He did not know it at the time, but he had just single-handedly given birth to the next modern feminist movement: the SlutWalk.

SlutWalks appeared first in Toronto as a group of women and men who were outraged by Constable Sanguinetti’s statement and took to the streets. They protested the idiocy of the idea that women can be divided into “sluts” and “non sluts” and that one group is more at fault for being raped than the other. By being advertised and mobilized by the Old Girls’ Club 2.0 of social media and the feminist blogosphere, SlutWalks have taken place in seventy-six different cities on four different continents and across several different cultures. “Sluts” and their allies alike rallied, organized, and marched in cities ranging from San Francisco and Montreal to Morelia, Mexico and Bishek, Kyrgyztan.

Inspired by Constable Sanguinetti’s statement, SlutWalk protestors seek to re-appropriate the word “slut” in the same way that queer, dyke, butch, and geek have been reclaimed as positive identities. Just as Kathleen Hanna famously scrawled the “s” word across her stomach at the height of the Riot Grrrl movement, many SlutWalkers wish to redefine “slut” and remove its negative connotation as an apparent qualifier of who does and who does not deserve to be raped. In their eyes, “slut” should become a sex-positive term, used to describe a liberated, sexually free woman who dictates her own promiscuity free of social judgment or repercussions.

No. Rape happens because of rapists. 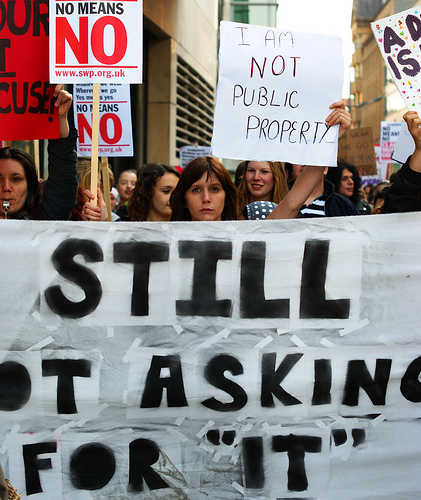 Though wildly successful, the SlutWalk movement is not without its criticisms. For one, it has been accused of only catering or applying to white, western feminists. Globally, most women are in no position to re-appropriate the word “slut” in the way that the name, or many of the movements’ spokeswomen, suggest. Though western women are able to flirt with, and even experience, a modern sexuality without the traditional helping of social stigma, many other women live in a cultural reality of honor killings, corrective rape, and unspeakable shame. “Sex positivism” is literally an alien concept in most parts of the world, and is rendered even more irrelevant in many cultures by the institutionalized levels of patriarchy and ignored violence against women.

Additionally, within western cultures white women are at an advantage in this movement, as they have the privilege of being disassociated from their sexuality enough to present themselves as either “women” or “sluts.” That is, as a majority race in western cultures, white women are not as easy to stereotype sexually. Many women of other races do not feel that they have this privilege. Some women are stereotypically cast as hoes, irresponsible young mothers, or sexually “loose” women. Others are promiscuous, sexy, and “unrapeable,” since they are “always ready.” In other words, female sexuality is stigmatized by race in a way that denies women the privilege of presenting themselves as either women or sluts. They are put enormously at risk of upholding caustic stereotypes if they self-identify as the latter.

It is no secret to feminists that there is no universal sisterhood. Each problem, policy, and movement inevitably applies to some women more than others. This inadvertently slices through the glorified ideals of universal feminism and elucidates the privileges of some women over others based on race or class.

How then has this phenomenon, Slutwalking, captivated and spoken to women from New York City to Bishek?

Re-appropriating “slut” into a sex positive term is more important to some niches of women than others. Some women are eager to call themselves sluts to intensionally blur the line between Constable Sanguinetti’s fictional and rapeable “sluts” versus unrapeable “everyone else.” Yet many women are still not comfortable putting their sexuality on the line.

However, the second element of re-appropriation taken on by this movement is that of the blame, redirected from the victim to the perpetrator. Though one could argue that some women are likely to be blamed more than others, most would agree that around the world, societies universally teach, “Don’t get raped!” rather than the obvious, “Don’t rape.”

But that is not to say that re-appropriating the “slut” in “SlutWalks” is not critical to the movement . As feminist activist Jessica Valenti stated in an interview, “Do you think I would be sitting here if they were called Empowerment Walks?”

Anna Lekas Miller is a freelance writer and activist, currently interning at The Nation Magazine.