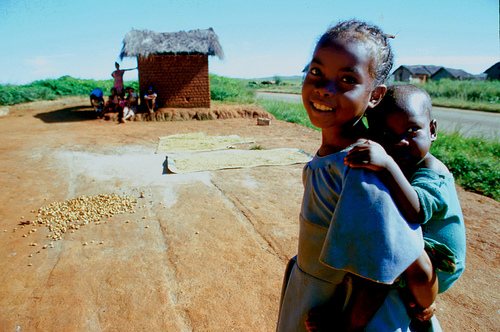 Madagascar’s Land Distribution – what is left for the Malagasy?

In Madagascar, a diverse set of needs as well as the factions representing them battle to find a way to fulfill their interests, often leading to turmoil. Madagascar’s policies of land distribution are one such battle. The government struggles to balance efforts to protect Madagascar’s unique biodiversity with efforts to ensure economic opportunities for local populations as well as efforts to attract new foreign investment to develop the country.

Madagascar’s abundance of natural resources such as forestry, minerals and arable land attracts many large multinational corporations. These agreements, signed under the pretext that it will increase employment in the country, often hide the capitalistic and often exploitative intentions of the corporations or the Madagascar government due to the lack of governmental transparency and allegations of corruption.

South Korean company, Daewoo Logistics, signed a deal with the government in 2008 that would have given about 1.3 million hectares, which represents roughly half of Madagascar’s arable land to South Korea for a ninety-nine year deal. Former President Marc Ravalomanana struck the deal much to the uproar of the population and the opposition. Such a deal would have put the country at a great disadvantage since much of its population relies on subsistence farming and since the deal will monetarily bring back almost nothing to the government.

However the population was unwilling to stand for the injustice of Daewoo Logistics’ deal. The signing of the deal was one of the determining factors of the coup d’état in 2009 when Andry Rajoelina, former mayor of Antananarivo (Madagascar’s capital) announced that he was taking power. Rajoelina compared this land deal to “neo-colonialism” – foreign powers that take over what rightfully belongs to the people without consultation and without compensation. The controversial new president promised changes like constitutional reform and to govern without corruption. However, the international community asked questions concerning the legality of this new power and the legitimacy of its administration, which in turn caused even more political instability. The government was not recognized internationally and therefore did not receive any more aid internationally.

Arable land remains in Madagascar’s hands for now but the changes in the political landscape causes further economic problems. Conservation efforts were among the processes undermined as a result of the 2009 coup.

Because of its remote location, Madagascar enjoys a biodiversity unlike any seen on the planet with about ninety percent of its plants and animals not found anywhere else. It split from continental Africa more than sixteen million years ago, which has allowed complete isolation from other species in the world. In early June of this year, World Wildlife Fund published a report saying that six hundred new species were discovered in the country. All agree that this biodiversity hotspot needs to be protected but this unique fauna and flora is under great risk if local populations, the government and non-governmental agency do not agree on what the protective measures should be. Years after the 2009 coup, an agreement has yet to be reached.

However the 2009 coup brought so much instability that the World Bank did not see it safe to keep funding the country until June 22, 2011 where it loaned US$52million to fund ecotourism, community development and create thirty new parks within the next three years.

But where does that leave the local population? Some of the sources of income for those living outside of the large cities include the selling of rosewood, a precious wood, and showing tourists where to see lemurs in the forests. This second economic activity, which brings about four hundred million dollars per year, is in theory helped by the preservation measures. However the coup has been deterring tourists from coming into the country, leaving many people without the capacity to afford rising food prices. The first source of income, however, is greatly endangered by the conservation measures. Cutting down rosewood is illegal because of its protected species status. Though these measures are necessary for the environment, they also put the population at great risk. Some rely so heavily on it that hundred thousand trees were cut in the 2009 estimate.

A further part of Madagascar’s living habits is the “burning culture” in order to collect wood and make the land more fertile. This practice serves two purposes for the local population; burnt part of the forests are harvested, and the burnt wood collected to be sold. The land, then, is full of minerals and therefore more prone to cultivation. However, the deforestation encourages erosion and further threatens the ecosystem.

This puts the country at the risk of losing some of its greatest natural resources but in a country where about seventy percent of the population lives under the poverty line, there are very little alternatives. Should the protection of the environment come before the economic hardships of people dependent on their natural resources for livelihood?

This is the challenge facing Madagascar; a land full of unique life, but one that is struggling to find a balance between economic, political and environmental development. Political and economic gains for the elite are the residual effects from many environmental policies, which bring international aid and recognition, however meeting these interests creates a huge imbalance since the people are left with very little.

Marion Bauer is an activist and a political science student at McGill University.