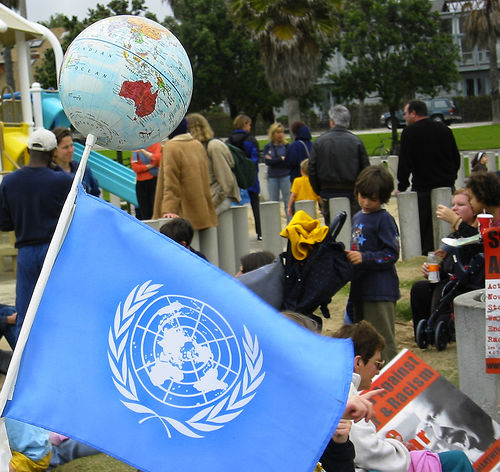 Interventions in Africa: Help or Hindrance?

Sub-Saharan Africa withstands an almost constant onset of civil wars, ethnic conflicts, and failed states. When these tragedies occur, there is an attitude within the international community that some form of intervention is required from either the international, continental, or regional level. The question remains whether these involvements are actually helpful, or could the new norm of constant intervention be considered a hindrance to African countries?

Each category—international, continental and regional—has had its share of both successes and failures. In general, international and continental interventions both suffer from the plight of bureaucratic decision-making, while regional efforts benefit from a more bottom-up approach. Thus, the question of whether interventions are an effective tool has to be answered within the context of who is intervening.

The United Nations, as the most prominent international institution in international relations today, is the case study for international interventions. The UN’s General Assembly (GA) is made up of over 150 member-states, and within this apparatus, it must account for the opinions of every member-state when making decisions. While the Security Council (SC) of the UN has the final say in most decisions regarding disrupting a country’s sovereignty, in other words an intervention, it cannot ignore the opinions and requests of the GA. As the SC accounts for the GA’s opinions, the vicious process of bureaucratic decision-making begins. The UN has to appease its member-states when making its decisions. If there are blatantly conflicting opinions within the organization, there must be a process of compromise. While the countries that oppose one another may individually have suitable plans for an intervention, when compromise combines the two proposals into one, there is a high likelihood that the logic and effectiveness of the plans will be lost. This is especially true when the motives of the actors are based on self-interest rather than on helping the country in need; unfortunately this is almost always the case.

The African Union (AU) is the strongest internationally recognized continental organization in Africa, and thus exemplifies continental interventions. As a result of its membership, the AU has a lot more potential than other governing bodies to help in terms of interventions. It is comprised of the countries that suffer from similar problems in similar political climates. Yet the AU faces a major obstacle in trying to satisfy its various member-states, who can all still have various motives and interests despite being part of the same continent. This problem, similar to that tackled at the UN, often results in a compromise, which once again will lead to ineffective policies where one ideological viewpoint is not sustained. As such, bureaucratic-decision making is a problem time and time again in intervention policy, motivated by the apparent self-interest of parties, at both the international and continental level.

The key to successful and peaceful interventions lies in regional bodies, such as the Economic Community of West African States Monitoring Group (ECOMOG). The group is bound together by a common desire to stop the spillover effects of conflicts from causing further tensions in West Africa. The regional organization works because its members’ self-interests coincide with ECOMOG’s common goal. [1] Two decades of peace processes in West Africa: achievements, lessons, failures. Regional organizations are generally composed of countries with similar political, economic, geographical or cultural circumstances. These regional organizations are much more effective in intervention missions than the international or continental groups that attempt to intervene in similar situations. In industrialized states’ dealings with the developing world, there are often examples of grassroots organization using bottom-up approaches that are much more effective than the top-down ones. This trend has presented itself in working with aid for developing countries where initiatives such as micro-lending have had long-term positive impacts. [2] The possibility is that the concept of the bottom-up can apply across the board in dealing with Africa’s numerous issues; smaller-sized initiatives may be more effective in all regards. Despite many of these regional organizations having structural issues that inhibit their effectiveness, [3] they have an understanding of the issues that larger organizations are unable to conceive. Furthermore, bureaucratic decision-making is often bogged down by the actor’s own self-interest, whereas regional or smaller initiatives are often motivated by a desire to solve the problem itself, which eventually benefits neighbouring countries.

The perspective which posits international and continental interventions as ineffective is often seen as pessimistic and cynical. If we are truly trying to help, but are currently doing so through ineffective means, is it not worth it to analyze the situation in a different manner in order to find out what actually works? In this case of interventions in Africa, we do have an idea of what is most effective, and that is regional interventions. Unfortunately, support is more widespread for UN or AU-backed interventions, despite their lack of effective capacity.

All in all, intervention can only lead to peace in situations where it is led by a genuine motivation to help, and where there is also an appreciation and understanding of the domestic socio-economic and political situation. The motives and interests of international players cannot take the forefront in interventions. The underdevelopment of the African state was a necessity for the formation and consolidation of European states, and the continued presence of the global North in African domestic politics will continually undermine any potential for development. Instead of always intervening on our own terms, maybe we should take some time to understand individual situations and support initiatives that already work.

3. Khobe, Mitikishe. 2000. “The Evolution and Conduct of ECOMOG Operations in West Africa” in Institute of Security Studies Monograph No.44, February 2000. Available at: http://www.iss.co.za/Pubs/Monographs/No44/ECOMOG.html