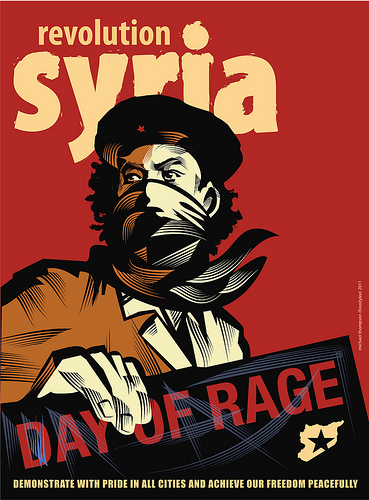 The Arab Spring: to live with the dignities of human rights or die trying

As one speaker addressing the crowd at the Global Day of Action for Syria in Montreal said, the revolutions of the Arab Spring are, without a doubt, human rights revolutions depicting the people’s stark choice: death or dignity.

Beginning in Tunisia during the winter of 2010, the Arab Spring refers to the revolutionary movements that have emerged throughout Northern Africa and the Middle East. Demonstrators are demanding freedom from authoritarian regimes in order for their human rights to be respected and upheld.

In the Tunisian revolution around three hundred people were killed, though as activist Haroun Bouazzi says, even one is too many. Across the region, many more people have lost their lives in a struggle for freedom and justice from authoritarian regimes.

Bouazzi, a member of the Montreal Collective for Social Struggles in Tunisia, discussed the importance of mobilized diaspora communities for the revolution in Tunisia. “Dictators hate the light. They want to stay in the dark and do whatever they want and making the media talk about what they’re doing, you know, I’m pretty sure we actually saved lives,” he said.

The population of the Tunisian migrant community in Canada numbers around sixteen thousand yet, despite their small number, Bouazzi believes there was a large impact from demonstrations organized by the Montreal Collective for Social Struggles in Tunisia—particularly among francophone media. “We felt that it was our duty to be in the street, and to make the media talk about this,” he said.

Since the revolution, Tunisian civil society actively expresses its’ needs and demands. Violence towards sex workers and increased police wages were among some of the reasons that Tunisians took to the streets. Along with new associations being formed and older associations finally granted the freedom to carry out their work, Bouazzi described how Tunisians are “learning freedom.” “Everyone agrees that they want [the elections] to be a success. Not only for Tunisians, but for all the Arab world, the Muslim world and the world. We feel that we have a responsibility here. We started something way bigger than our country—nobody would have expected something like this—and we don’t have the right to fail for us and for everyone else,” said Bouazzi. Though conditions in post-revolution Tunisia appear positive, the bloated public sector implicates many Tunisians in the actions of Ben Ali and his regime. Out of the 10.4 million Tunisians, approximately two million were claimed to be members of Ben Ali’s party, the Rally for Constitutional Democracy (RCD), in existence since 1988. “Justice is far from done. Ben Ali is just the head of a big system,” added Bouazzi.

This big system in Tunisia is in part a result of the adoption of the International Monetary Fund and World Bank’s structural adjustment plan in 1986 and occupies a key contributing role to the Arab Spring. Neoliberal economics, the logic behind the creation of structural adjustment plans, are as much a part of the Arab Spring as the dictators who are now facing an uncertain future. The Arab Spring represents one of the largest challenges to the neoliberal status quo and policies to date.

Throughout the world, the implementation of structural adjustment plans has led to the emergence of vast inequalities in wealth among people—the Middle East and North Africa are no exception. A disproportionate number of people have been excluded and marginalized while a small few have become extremely wealthy. Interestingly, the locations of the first revolutions of the Arab Spring, in Tunisia and Egypt, are the countries that have governed in accord with neoliberal adjustment plans for the longest.[ [1]->http://english.aljazeera.net/indepth/opinion/2011/02/201122414315249621.html]

In the view of Collective for Syria activist Brian Aboud, the vast inequality of wealth in combination with increasing unemployment rates and worsening of many Syrians’ economic wellbeing is what mobilized them to demonstrate against their President Assad’s regime—and it is not a phenomenon unique to Syria.

“There’s a set of very pronounced economic conditions that you see in other parts of the Middle East that gave rise to those revolutions as well,” said Aboud.

In addition to poor economic conditions, it is state repression, injustice and life under an authoritarian regime that exert a large toll. Syrians lived under a forty-nine year emergency state—the longest in the region. With all rights suspended, security forces could arrest anyone at anytime without accusations, a warrant or any kind of due process according to activist Buschra Jalabi.

“We have to remember—this is a police state. The only way to think or act, in terms of security, is in terms of repression,” she said.

Security forces given free reign, like those in Syria, are able to repress perceived threats to a regime with minimal fear of consequences or accountability due to the international community’s support. Through albeit tumultuous working relationships, the international community, in line with neoliberal policies and led by the United States, supported most, if not all, authoritarian regimes throughout the Middle East and North Africa. The track records of human rights violations seem to factor into the international consciousness only if international economic interests are in jeopardy. With authoritarian regimes able to garner international support in exchange for the provision or guaranteed availability of their regional interests, these regimes appeared immune and insurmountable.

However, uprisings and demonstrations continue in spite of the enormous amount of repression exerted upon people by their own governments. Demonstrations for change throughout the region show the conviction and strength these people, otherwise labeled as disenfranchised, marginalized or powerless, possess and the changes they are achieving through their own efforts.

“I think the uprising in Syria erupted at a point which could not be delayed further,” said Jalabi in reference to the detention and torture of a group of boys between nine and thirteen years old who were apprehended by Syrian security forces for painting revolutionary graffiti. The boys’ graffiti slogan was a popular slogan; the people want the fall of the regime.

Evidence of this strategy includes the case of thirteen-year-old Hamza al-Khateeb. Taken by security forces at a demonstration, his body was returned to his family bearing evidence of severe torture, cigarette burns, mutilation and emasculation. The returning of the deceased to the family is a rare happening that Jalabi interprets as a gesture of calculated provocation.

“This kid shows the horrific violence to which they’re capable of,” said Jalabi.

The responsibility to stand in solidarity with the Arab Spring cannot be overstated. Recalling pictures he saw from Syria, Bouazzi said, “It’s a real massacre that is going on and we have at least to show these people that they are not alone in their struggle. Nothing can stop these people from winning and we have to be on their side.” The Arab Spring shows that governments and mass systems of oppression can be stopped—they are not inevitable or invulnerable to mass actions and by extension, anyone can challenge the status quo by adding their voice to support the Arab Spring’s demand for human rights.

Erin Hudson is a student at McGill University, an editor at the McGill Daily and a volunteer at McGill’s campus-community radio station CKUT 90.3FM.