Food Crisis in the Horn of Africa : Beyond food aid and cash transfers

Recent headlines are dominated by what has been described as ’the worse drought the Horn of Africa has suffered in sixty years’. This comes as no surprise. Amid the droughts that gravely impacted North Eastern Africa in the past, sophisticated systems have been put in place to help prevent similar crises. Despite early warning coming from experts, NGOs and aid agencies, whom over a year ago predicted an imminent crisis, over ten million people have now been affected.

The regions most severely impacted by the current food crisis are northern Kenya, south eastern Ethiopia, southern Somalia and Djibouti where hundreds have already died and millions are on the brink of starvation. Water in these regions is scarce and rainfall varies greatly between years and from location to location. Two years have now passed without rain falling in the region. This crisis, however, that is perhaps exacerbated by climate change, is nothing new to the population.

The region’s climate is characterised by frequent episodic dry spells. Pastoralists have lived and adapted to the riverine ecologies, which have served as a vital resource for centuries. Over the years they have learned to use water and land with optimum efficiency and have adapted to cyclical droughts by moving, sharing, exchanging and selling animals. Paradoxically, the recent dry spell is clearly underpinning the current state of emergency. So what has changed?

Growing numbers of scholars have identified three main causes for this current situation: ongoing conflict and social unrest, economic policies, and climate change. As a result of agricultural policies aimed in the wrong direction, conflicts and social unrest induced displacement have taken their toll on people’s ability to cope with a changing climate.

Insecurity is a key factor in explaining the crisis. There has been ongoing fighting in central and southern Somalia between rival warlords, which has resulted in the displacement of over 1.4 million people within the country. Islamist insurgents have also limited the ability of aid agencies to reach the targeted areas. As a result of the conflict, pastoralist groups have been unable to reach areas where rain has fallen.

In Ethiopia, violence has been increasingly intensifying in the southern region of Ogaden. This has similarly resulted in the inability of pastoralist communities of the south to reach the key natural resources they need to ensure their livelihoods such as land and water.

Pastoralism as a sustainable way of living?

Some argue that pastoralist livelihoods are unsustainable due to their chronic vulnerability, but this perhaps suggests a lack of understanding of pastoralism. Overseas Development Institute (ODI), a UK think tank, argues that the pastoralist communities have been weakened by a range of external factors. In fact, pastoralists in most countries in the Horn of Africa, who derive their main source of income from rearing livestock, have suffered from detrimental policies and economic marginalization. Notably, national policies have failed to support their livelihoods as an important economic resource and have undermined their resilience by restricting their access to key natural resources such as land and water. For example, some populations have been moved, with their livestock, to reserved areas during times of droughts.

Livestock is an important economic resource that could be positively harnessed and could offer more employment than any other productive sector. In fact, Ethiopia’s eastern region of Somali accounts for the majority of pastoralists in the country and is the wealthiest of all Ethiopia’s rural regions. This is a result of the region’s high levels of livestock exports and imports. Studies have even shown that if pastoralists’ cash income were increased, which could be done by avoiding pockets of isolated food insecurity, the country’s overall food security would also increase. Since pastoralism is uniquely capable of operating in dryland environments, where there are low and extremely variable rainfall conditions, it has become a viable method for combating famine in Africa.

In spite of the rapidly growing population and recurrent droughts, the land and water resources are still under-utilised and could support many more people. The emergence of this realisation has in turn led to a surge of investments across the whole of Africa. Often large chunks of land are leased to ’foreign investors.’ Some call this ’land grabbing,’ while others argue that there is a desperate need for agricultural investment and rural development. Not only are new policies and actions needed, but they also need to address the many practical difficulties farmers face and increase the productivity of assets. In order to do so, some measures can be taken to increase farmers income and decrease vulnerability such as available storage for their surpluses in case of adverse conditions in the future without much effort, as well as financing for rain water harvesting, drought resisting seed and development of rural infrastructure, irrigation systems and roads.

Difference between chronic problems and emergencies There is a need for a more integrated disaster management approach in the Horn of Africa. The first step should be to enforce interventions on livelihoods as the main focus of aid. These interventions, as described by ODI, should “aim at protecting and/or enhancing livelihoods assets, strategies and outcomes, or the context, structures and processes that influence these three elements should be the focus.” It has been said that these interventions contribute to saving lives, building resilience and countering vulnerability within nations. They therefore could be considered a more ’developmental’ or long-term approach than relief aid, as the latter often comes in a reactive manner as money or food.

In some cases, aid is essential to prevent catastrophic short-term losses, however it can sometimes prove to be more detrimental than beneficial in the long term. It undermines local food production, but also discourages any other diversification of livelihoods and creates demographic pressures that are not sustainable. This has proven to be true since the adoption of the Millennium Development Goals (MDGs), which sharpened the focus on the role of aid in achieving realistic progress in the short term. The focus on efficiency being judged by short-term achievements has caused less of the available aid in the Horn of Africa to be directed towards systemic structural problems.

The delayed intervention of governments, donors and aid agencies is also responsible for the crisis. Lack of co-ordination of the NGOs and aid agencies, investment in development and disaster management is still lacking despite growing food instability. It should aim at protecting livelihoods and current assets, and it should comprise emergency livelihood interventions. Furthermore, aid should not always have to come as default emergency food relief, and changes should be implemented structurally within governments. 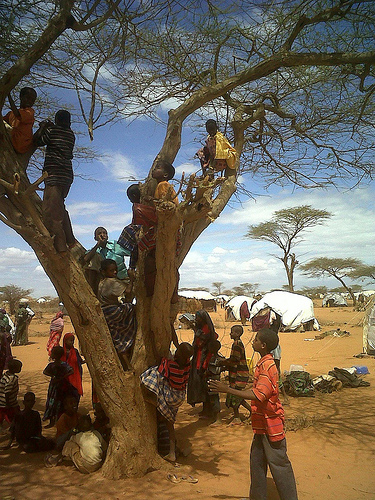 Children climbing in a tree in east Kenya despite the challenges and hardships they face in the Dadaab refugee camps.

Some examples of targeted and efficient solutions

A program undertaken by Afar Pastoral Development Association (APDA) has demonstrated that the total cost to help keep two cattle alive for two months for eight hundred households would be around US$90,000 whereas to buy two new cattle for the same amount of households would cost nearly US$470,000.

Another initiative taken by APDA was the ’Animal Feeds for Work’ programme, which provided vulnerable families with concentrate feeding for ten of their goats, as well as veterinary care. After only five days of feeding, goats provided twice as much milk that was nutritious and available for children and the elderly. The surplus milk was also used to make butter, which they were able to sell at the market. The total cost of this operation was just over US$55,000. Because of this there was no need for any agencies to provide supplementary feeding for these families. Participatory surveys also showed that food aid was the least preferred intervention throughout pastoralist communities.

It is worth mentioning that ’de-stocking’ is also an intervention that has proven successful. It is aimed at ensuring that pastoralists get money from their animals before they die or that body deterioration made them worthless. Such an initiative was trialled in 2005-06 by Save the Children US and resultantly brought more funds to pastoralist communities because pastoralists were guaranteed to receive almost twice the usual amount for their cattle. The benefit-cost ratio is estimated at 41:1.

With a growing population, climate change and high barriers for access on the international markets add to the inability to access markets and achieve maximum prices for livestock products. The underlying causes of vulnerability in pastoralist communities must be addressed. As a matter of fact, many of these chronic susceptibilities come as the result of inadequate post-crisis intervention and an inability to replenish assets and promote alternative livelihoods.

In order to save lives, first and foremost, the emphasis should be on saving livelihoods. For example, efforts could have been made earlier to save millions of dollars worth of livestock, funds which represent income to buy food, rather than depending on humanitarian aid to feed malnourished children.

These strategies need to be backed by programmes with flexible funding in order to avoid crises like this from happening again. There should be emphasis on the importance of cross-border mobility, which is vital to ensure the resilience of pastoralist groups and their ability to feed themselves. For example, the ban on Somali livestock imports by Saudi Arabia proved to be an economic barrier. Decades of latent government action has reinforced emergency humanitarian response as a solution to an endemic situation in the Horn of Africa. A long-term solution needs to be implemented which integrates African cultural values and ancestral knowledge of agriculture with modern science and technology.

Geneviève Lavoie-Mathieu is a recent graduate from McGill University with a degree in International Development Studies, currently undertaking an internship at the Potsdam Institute for Climate Impact Research.