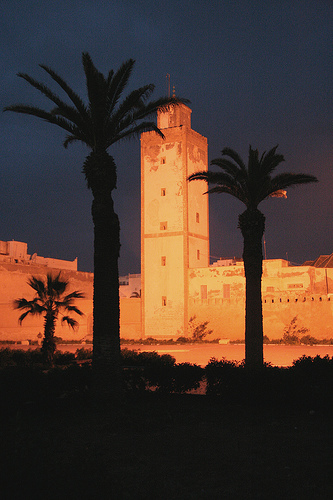 Moroccan Monarchy in the Arab Spring

Like many Arab revolutionaries before him, including Mohammad Bouazizi of Sidi Bouzid, Tunisia, Oussama Khlefi is young, highly educated, and unable to find work. He has a dual degree in information technology and business management, credentials that could earn him a lavish salary if he lived in Europe or even the United States, but currently lives with his parents in Salé (a small town outside of Rabat, Morocco), while picking up odd jobs in a vain attempt to earn and save money.

This is what pushed him and many others into the streets on February 20.

Like the many other uprisings across the Arab World, Morocco’s February 20th movement began as a response to the lethal combination of widespread government corruption and economic despair. Thousands of young people in Oussama’s position—young and educated recent graduates—are quickly realizing that their university degrees are meaningless in a desolate and corrupt economy.

Most of the country’s economic wealth is concentrated in the hands of King Mohammad VI and the royal family. Needless to say, it is hardly able to “trickle down,” and the few Moroccans who do have jobs making use of an advanced degree are most likely employed through a personal connection or blatant bribery. It is nearly impossible to enter the job market based on merit alone.

The bottom ninety-nine percent, those who are not connected to royalty or have extraneous money in their personal budget for bribes, remain chronically unemployed. They are like Oussama Khelfi: picking up odd jobs, living with their parents and unable to imagine a future of their own.

Inspired by the revolutions in Tunisia and Egypt and uprisings across the entire world, Morocco set a date—February 20th—and organized protests across all of Morocco’s major cities. The demonstrations began with few basic demands, mostly revolving around limiting the executive powers of the king. Moroccans wanted a representative government that was elected, rather than selected, and for the king to be a ceremonial rather than politically authoritative figure. As the protests began to generate momentum, these demands expanded to include the complete dissolution of the current parliament and government, the release of all political prisoners, and long overdue judicial proceedings to investigate well known, but never addressed cases of human rights violations and corruption.

In the words of Oussama Khlefi, “we want to be citizens, not subjects.”

Morocco is technically a constitutional monarchy, but shares many of the same characteristics of the sultanistic dictatorships of Tunisia and Egypt. Though power is allegedly balanced between King Mohammad VI and parliament, in practice it is highly concentrated in the hands of the king. He controls all legislative, judicial and religious decisions and hoards the lion’s share of the economy as the rest of the country falls into economic disrepair. The King has promised constitutional reforms and referendums a number of times, but previous empty promises make it difficult to believe that his proposed concessions of power will be fulfilled or generate changes in any meaningful way.

Despite the illusion of stability and a balance of powers, King Mohammad VI’s twelve year “ceremonial” rule has produced the same toxic effects as Ben Ali and Mubaraks’ kleptocratic dictatorships. Moroccans face the same soaring rates of unemployment, illiteracy and rural and urban poverty. Education and healthcare, though on paper free and accessible to all, often require similar personal connections and bribes as employment. Decades of these inescapable social hardships render descriptions like “pluralism” and “constitutional monarchy” meaningless.

Many Moroccans celebrated on Friday, June 17 when King Mohammad VI announced that he would reform his government to be elected, rather than royally selected and make the prime minister, rather than the king, the political authority of the government. They drove through the streets of Tangier, Fez, Rabat, and Casablanca honking horns, cheering and waving the Moroccan flag. Most international media seems to have latched onto the celebratory images as a victory of the Arab Spring, but is it?

On that Friday, King Mohammad VI announced a new constitution that “enshrines a citizenship-based monarchy.” The prime minister, rather than the king, will now be the “president of the government” and able to appoint officials and dissolve parliament. He will be democratically elected, rather than royally appointed, and preside over a parliament that oversees all legislative decisions. Still, the king will remain the ultimate religious authority, and be the ultimate power broker of military and security issues. There is no guarantee that corruption within the royal family will be examined or mitigated, making it quite possible that the economic conditions that pushed Moroccans to protest in the first place will remain stagnant.

Moroccans will be back in the streets.