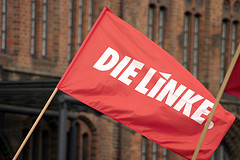 The German left-wing party Die Linke issued a shocking statement on 7 June 2011, stating that “We will not participate in initiatives on the Middle East conflict which call for a one-state solution for Palestine and Israel, or for boycotts against Israeli products, or even in this year’s Gaza Flotilla trip.”

This position is particularly offensive as it is noted within a party statement concerning anti-Semitism, thus making a clear and totally erroneous connection between anti-Semitism and support for boycott, divestment and sanctions (BDS) and various political solutions to the Israeli-Palestinian conflict. Die Linke, a supposedly progressive political party, is thus adopting the most right-wing and reactionary positions of the Israeli government on this issue.

Jewish and Palestinian left-wing activists from Israel have issued a response letter to Die Linke, which is reproduced below:

We, Jewish and Palestinian left-wing activists from Israel, strongly oppose the recent statement made by your party with regard to anti-Semitism. This statement deals with two very different domains as if they were one, between which it is vital to make a distinction in order to be able to fight anti-Semitism in Germany and worldwide. Moreover, the statement in question implies an outrageous accusation against civil society in Israel, Palestine and the international solidarity movements from around the world, which support a just peace in our region.

We are aware that anti-Semitism, just like Islamophobia and other forms of racism, sexism and homophobia, also exist within the European left. As members of the leading left party in Germany, it is vital that you take a firm stance on this issue and we support you in that respect in your unequivocal condemnation of racist anti-Jewish activities, ideologies and discourses.

We do not necessarily share the same view on the issues and forms of struggle regarding the Israeli-Palestinian conflict, including those mentioned in your statement: A one-state versus two-state settlement; the campaign for boycott, divestment and sanctions (BDS); and the various international solidarity activities, including the flotillas breaking the siege of Gaza. Nevertheless, we are unanimous in our conviction that none of these stances or acts have anything to do with anti-Semitism in and of themselves. To imply, as your statement does, that simply discussing these topics is anti-Semitic, is an affront against a global anti-racist movement of which we are proud members - a movement which is fighting the illegal and brutal policies of the State of Israel against the Palestinians within its internationally recognized borders, those in the occupied Palestinian territory and those in the diaspora.

We believe that solidarity with the Palestinian struggle for independence and justice is not only a moral imperative, but also in the best interest of Israeli citizens and Jews worldwide. The Israeli establishment tries to present itself as the legitimate representative of the entire Jewish people, a proclamation that is all too often accepted without any criticism in Germany and throughout Europe. In recent years, the Israeli government is increasingly utilizing the false equivalence between anti-Semitism and criticism of its policies in an attempt to quash debate over the Palestinian issue.

We insist that Die Linke continues to express its clear opposition to anti-Semitism, its solidarity with the Palestinian cause, and its commitment to continuing an open discussion about the different forms of struggle, activism and solidarity, as well as the possible resolutions to the conflict. Far from being conflicting, these objectives in fact complement each other into what we believe would be the most effective progressive position on the issues.

We will continue to express our opposition to all forms of racism and oppression and hope that you will reconsider your decision on this issue so that we may struggle alongside one another for a just peace in the Middle East.