A Lesson to Be Learned from India’s Failing Microfinance

Microcredit, microfinance, and microlending are synonymously used to describe the trend policy makers attribute to significant reductions in poverty. Essentially, microfinance programs use innovative and often contractual techniques to provide loans to people who would otherwise not qualify for typical loans from banks. The concept was introduced by Dr. Muhammad Yunus in Bangladesh. He noticed that rural women needed some type of capital to launch their businesses; however, the only way to obtain such capital was through lenders who charged impossibly high interest rates. Consequently, most of the women were trapped in debt, unable to ever pay back their original lender. Dr. Yunus founded the non-profit Grameen Bank in 1976 and both eventually won the 2006 Nobel Peace Prize for their work as the pioneers of microfinance.

The original focus of the Grameen Bank was on rural people with no credit history and no collateral. However, the bank soon expanded and an industry started to grow around the idea of microfinance. Today, microfinance is accessible to anyone from rural Bangladeshi farmers to inner-city kids from New York. In the industry, loans are usually given to women. At Grameen, for example, ninety-seven percent of the clientele are women. This trend is based on numerous studies that show that women are more likely to spend money on improving the welfare of their children and investing in the future of their families than are men.

Typically, microfinanciers use techniques such as group lending or offering education, training, health care and other social services to offset the lack of collateral that usually prevents borrowers from access to regular bank loans. Grameen Bank’s main focus is to improve standards of living and raise people above subsistence levels of existence permanently. In other words, its objective is not profiteering. Other non-profit organizations with similar vested interests are Opportunity International, Finca International, Accion International, and Oikocredit. 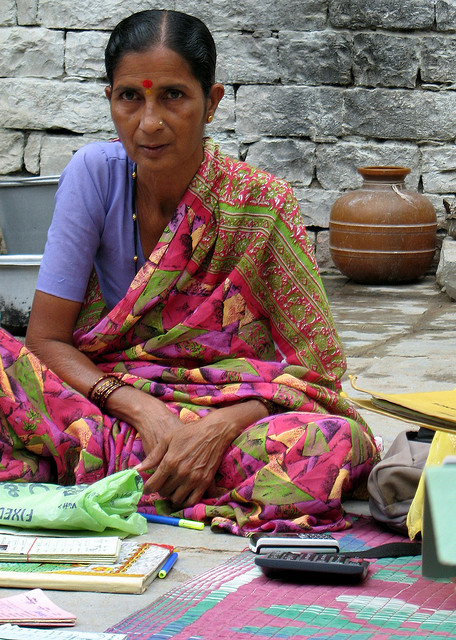 A client of SKS Microfinance, India

Microfinance was wildly successful in Bangladesh, which gave the illusion of a win-win situation that yielded both profits for Grameen Bank and huge improvements in development for Bangladesh. This is a tainted view since Grameen’s goal was development and any profits were an added bonus. Private organizations were misled to believe they too could first and foremost profit from this type of venture while developing the country in the process. This approach which has shown little success—for instance the current collapse of several microfinance institutions in India—is a warning to the wise against mismanaged microlending.

In many ways, the microcredit crisis in India resembles the 2008 subprime mortgage crisis in the United States and may affect global markets significantly. India’s microcredit industry has grown irresponsibly fast, mainly due to the pursuit of profit, which is often unregulated by the government. Until November 2010, India had the fastest microloan growth in the world. Between 2003 and 2009, the number of microloans shot from 1 million to 26.7 million. Unlike Bangladesh, most of the microlending was done by private investor-owned companies. Venture capitalists, like Vikram Akula and Vinod Khosla, have led the way in India, making tens of millions from microlending with negligible effects on the country’s development. Many entrepreneurs followed their example since entry into the microcredit industry was easier once a base of consumers had been established. As a result, some villages have up to ten microcreditors offering loans.

These new profit-hungry creditors often bypass the practices of group lending and the provision of social services that in the past ensured both the repayment of loans and the success of the program. Without collateral, borrowers took out new loans to pay off the interest on the older ones. The subprime debacle in the states functioned in a similar way. Large private banks lent clients grossly overestimated mortgages that they could never pay back. The banks did so without checking their credit history or ensuring they would not easily default. Poorly-made investments became bundled up in global finance, as is the nature of the Twenty-First Century. That particular bubble burst when borrowers could not pay back their loans. Not all impoverished people are equipped to take out microloans and even those that are equipped need assistance and a development plan to help them succeed.

In India, it has been reported that loan officers severely harass borrowers. Suicide has increased due to inability to repay loans. Regardless, the Andhra Pradesh government’s response to the crisis is not proactive. The government passed a law on October 14, 2010 that froze much of the microcredit across the county, similar to banning mortgages after a mortgage crisis. The ordinance is bankrupting private lenders and hurting all of the functioning microfinance programs. The objective of legislation should be to reform microfinance rather than kill it. It is unclear whether the government’s new law will help or hurt the poor. However, its extremity indicates that some other measure would have likely mediated the crisis in a better way.

Meanwhile, global commercial banks such as Citigroup Inc. and Deutsche Bank AG are establishing microfinance funds. The Indian case reminds us that private microlending must be well managed. If unregulated, private firms will grow globally and surely lead to a much greater crisis than the 2008 subprime mortgage debacle.