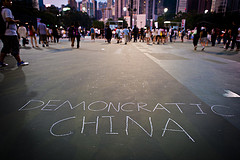 The Uncertainty of China’s Political and Economic Future

At first glance, the Chinese developmental model appears to be moving forward, with China recently surpassing Japan for the title of the world’s second largest economy. Chinese business certainly deserves some credit, as the number of Chinese firms to make it onto the world’s Fortune 500 list has increased more than tenfold in the last fifteen years, and currently sits at forty-two.

At the same time, the remarkably high growth rate per capita, averaging 8.1% between 1978 and 2002, has lifted more than a hundred million Chinese out of poverty. Most Chinese citizens are now able to indulge in activities that many in the West take for granted, such as eating Big Macs and surfing the Internet. As China ascends to the status of a middle-income country, we may perhaps expect its blossoming middle class to push for democratic reforms in this still authoritarian country. The fact that the people want more democratic freedoms, though, does not in the slightest mean that they will receive them. Chinese bloggers would ‘lol’—laugh out loud— at the idea of a possible democratic opening being initiated by officials in Beijing…if the government’s censorship of Internet blogs did not exist, that is. It seems that the Chinese Communist Party is not very fond of Google and Twitter, to name only a few.

Of course there are those who, appealing to the familiar tale of South Korea, Singapore, Taiwan, and Hong Kong, argue that some great democratizing wave will soon sweep through China. The four aforementioned countries, named the Asian Tigers experienced three consecutive decades of economic growth rates above seven percent between the 1960s and 1990s. First, we must concede that the Tigers’ unprecedented economic growth is rightly credited to the countries’ highly (yet selectively) interventionist governments, whose authoritarian structures facilitated what would have otherwise been difficult political decisions such as suppressing worker unrest. The same goes for China, where workers were willing to sacrifice certain political freedoms in exchange for their growing prosperity. But, unlike the Asian Tigers, whose prosperous economic growth ran parallel with the four governments’ gradual democratization, China is not yet rich. Of the four Tigers, Taiwan has the lowest GNP per capita, at $18,458. Not only is that figure more than four times greater than China’s GNP per capita, but China’s economic growth appears to have major obstacles to overcome in the foreseeable future.

Being a socialist country (at least in name), the Chinese government has been keen on emphasizing the interests of the nation above those of the individual. That seems to be the rationale behind arrests of political dissenters such as artists and outspoken lawyers, which the Chinese Communist Party justifies by appealing to the collective prosperity of the nation. Looking past the sharp regional economic inequalities (which surely favour the coastal cities), the government invokes the image of shared prosperity of all citizens alike. It would be foolish, however, to claim that even the middle class in China lives very comfortably. Especially now, after reforms in the 1990s ensured that state-owned enterprises were no longer burdened by providing social services such as old-age pensions and health care, the typical Chinese citizen is being forced to allocate a larger share of their disposable income on what was previously a secure social safety net. Since the 1990s, the amount of government transfers as a percentage of GDP has been steadily decreasing, and currently sits very low at 0.5%.

What’s more, China has a rapidly ageing population and is expected to become the world’s oldest country in about a decade. Consequently, most Chinese citizens (many of whom lack siblings because of the famous one-child policy instituted in 1978 to curb population growth) will have two parents that require financial assistance. An elderly population also equates with a shrinking supply of labour, something that undeniably contributed to the success of China’s export-led growth model, whereby an abundance of cheap labour helped to make them globally competitive. Likewise, the central bank’s devaluation of the Yuan ensures that Chinese goods remain relatively inexpensive, yet it has the ill-effect of simultaneously decreasing the purchasing power of more than a billion people who are still unable to reap the full benefits of China’s high economic growth. The diminishing labour supply should, in theory, lead workers to demand higher wages. However, suppressing these wage demands , is a task made much simpler when the party in power has no political opposition.

Unlike the Asian Tigers, who strategically targeted appropriate amounts of investment in both human and working capital, China follows a much more substantial, yet ineffective, investment pattern. State control of the media prevents the disclosure of the true inefficiencies of massive investments that attempt to showcase China’s strength, such as the $44 billion Beijing Olympics. The recent tragedy on the $30 billion, 1,320 km bullet-train railway between Beijing and Shanghai, has actually reversed the typical fear that the media exhibits in regards of revealing the government’s faults. After a preventable train crash on the railway killed at least thirty-nine people, even the state-controlled media began to criticize the government, in particular the railway ministry. On the one hand, some claim that this investment in infrastructure was indeed necessary despite the accident. On the other hand, in reference to China, economists (most notably Nouriel Roubini from New York University’s Stern School of Business) note the absurdity of any country being productive enough to invest half of their GDP in new fixed capital without eventually facing “immense overcapacity.” Bringing in too much capital will inevitably produce decreasing returns, but the Chinese government has yet to adjust away from this investment-driven model of economic growth towards a consumer-demand driven model.

On July 1st, the Economist published an article in which they specified the choice that the Chinese government is currently facing: “to liberalize or to step up repression.” At the same time, we can expect Chinese citizens to ask for more democratic freedoms as their economic freedoms wane. Unfortunately, though, due to certain awkward economic circumstances that the Chinese government will have to confront in the near future, and with the Arab Revolutions still fresh in mind, it seems likely that Chinese citizens will not only be denied new democratic freedoms, but may actually be stripped of some old ones. Granted we should not try to compare the very personalistic, dictatorial rule of the Arab countries that succumbed to revolution with the non-personal state ‘socialist’ government such as that in China. That being said, the Communist Party of China may nonetheless step up its repression before any popular discontent surfaces, as happened recently when thousands of police were deployed on the streets of Beijing following word of an Arab-like revolution spreading in China. The Chinese government, thus far, appears more confident in its ability to reinforce political stability than it is with economic stability.