Home > English > Alternatives International Journal > 2011 > September 2011 > Refugees as human rights defenders: Can they protect or do they need (...)

Refugees as human rights defenders: Can they protect or do they need protecting?

A panel discussion at the recently held International Association for the Study of Forced Migration conference tackled the often precarious position of refugee human rights defenders. Katie McQuaid reports on the issues at stake.

At the International Association for the Study of Forced Migration’s 13th Conference, in Kampala, Uganda, a group of human rights defenders sit in a panel facing an audience of academics, practitioners, policy-makers and refugees.

Hosted by the East and Horn of Africa Human Rights Defenders Project (EHAHRDP), their roundtable discussion grips the audience with challenging and moving presentations about the personal and collective experiences of human rights defenders (HRDs) forced into exile. In their own words we are told how forced migration is used as a tool by authoritarian governments to silence and suppress human rights defenders, and challenged to ask the difficult questions: is international aid creating an enabling environment for authoritarian regimes to continue their human rights violations? Are protection mechanisms helping or threatening HRDs? They open our eyes to the fate of double jeopardy faced by human rights defenders: if they continue their work of protecting and defending the human rights of people in their home countries they face an increasing threat to their further protection.

Every year, a large number of human rights defenders flee authoritarian countries in the face of physical assaults, legal threats and imprisonment. Hassan Shire Sheikh, executive director of EHAHRDP, argues that forcing HRDs into exile is an effective technique for authoritarian regimes - succeeding in not only removing dissidents, but also leading to self-censorship amongst remaining activists. Once outside their homelands, exiled HRDs confront many challenges, perhaps most notably the lack of effective support mechanisms to ensure their physical safety and enable them to continue their professional contribution. Many, despite facing severe challenges, bravely continue to do so. HRDs in exile, he explains, are prone to physiological and psychological insecurities, not to mention direct risks to their physical safety. Failures of protection institutions continue to avail exiled HRDs, indirectly rewarding those dictators at home and forcing most HRDs to live in an enduring state of limbo and fear. 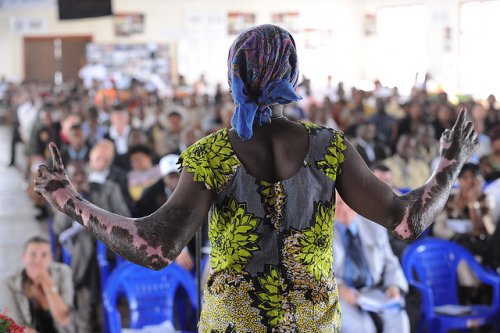 Survivors of rape, supported by UNICEF and VDay, held a day of speeches telling their stories and calling for an end to violence against women. The courage of the women to tell their stories in front of three hundred people was palpable.

Girma Fantaye, an exiled HRD and journalist from Ethiopia, escaped a charge that put him behind bars for many years for allegedly promoting ‘illegal’ organisations. He was the deputy editor-in-chief of the leading weekly current affairs newspaper ‘Addis Neger’. Ethiopia accounts for 22 per cent of all journalists exiled from Africa between August 2001 and May 2010. Somalia, Eritrea, Sudan and Zimbabwe are also a ‘good source’ of all kinds of exiled HRDs.

The recent Committee to Protect Journalists (CPF) report on exiled journalists is overwhelming. In 2009 alone, at least 85 journalists were forced to leave their homelands. Girma describes how in the face of thinning accountability, authoritarian governments are designing systematic tools of media repression, including co-option of human rights activists and media elite, economic pressures and legal content restrictions based on national-security grounds. The few HRDs who resist suffer the wrath of the authoritarian states. In the last two decades, the Ethiopian government, he demonstrates, have used various strategies to silence independent organisations, and during this period more than 100 HRDs were jailed without charges, tortured, killed or forced into exile.

In 2010, the ruling Ethiopian People’s Revolutionary Democratic Front ratified three fundamental laws, acting to purge every voice of dissent. In advocating for complete hegemony across Ethiopia’s political, economic and social spheres, the media, the NGO and civic (CSO), and the anti-terrorism laws emanate, Girma argues, from a total disregard for human rights, and the anticipated elimination of ‘the gadfly of its callous regime’ - the human rights defenders.

Following the ratification of these laws NGOs have been forced to close, including the Ethiopian Human Rights Council and Ethiopian Women Lawyers Association, and many grass-roots political activists have been incarcerated and killed. The regime’s learning curve and adaptability to suppress human freedom is mesmerising. It mixes carrot and stick strategies. The most applied carrot is co-option - the government can actively court HRDs and media-owners, showering them with attention and money - and you might be co-opted not to get the carrot, but also to escape the stick. The stick is applied to those HRDs who cannot be co-opted due to their fierce passion, instead being subjected to tools intended to exhaust even the most courageous of HRDs. At the present, these HRDs are facing unexpected, but consistent, short-term imprisonments, eventually fleeing the country after enduring unceasing threats and assaults.

Ethiopia is not alone. Following the March 2009 issuance of the International Criminal Court’s arrest warrant against President Omar al Bashir for war crimes and crimes against humanity in Darfur, Sudan’s HRDs and organisations have been on the frontline of an on-going crackdown. Three national organisations, the Sudan Organisation for Social Development (SUDO), the Amel Centre for the Treatment and Rehabilitation of Victims of Torture, and the Khartoum Centre for Human Rights and Environmental Development were promptly closed along with the expulsion of 13 humanitarian NGOs. Badawi Mohammed and Suliman Amir of the African Centre for Justice and Peace Studies, describe how this has closed off many of the most critical sources for monitoring the human rights situation in Sudan, a situation which is still critical over two years later. The already restrictive environment for human rights work collapsed. Complex and experienced networks of human rights defenders and lawyers providing legal aid were disbanded across the North as the human rights movement reached a crisis mode. Immunities established by relevant law for the national intelligence and security services and police have perpetuated a climate of fear and repression, in which members of civil society are at constant threat of intimidation, arbitrary arrest, detention, and torture. Legislation passed in 2009 barring cooperation with the ICC and those suspected of being intermediaries – as well as members of civil society in general – forced HRDs to leave Sudan and Sudanese HRDs have been dispersed throughout the world. At present, there is little to no capacity to monitor human rights systematically throughout Sudan, and particularly in Darfur.

Kiflu Hussain - a refugee and HRD from Ethiopia - passionately argues that human rights defenders in exile face a double jeopardy. Regarded as individual asylum seekers, HRDs are not afforded the protection of prima facie, or ‘group determination’. Rather than focusing on trends in their countries of origin, which in most cases can highlight systems which violate human rights and stifle civil liberties, exiled HRDs as individual asylum seekers are required to produce onerous proof to demonstrate the persecution at the root of their flight. Girma adds that the international community largely focuses on individual heroes, not exiled HRDs as a phenomenon.

Ahmedsadik Yusuf, an exiled journalist from Somalia, tells us a story unfortunately reminiscent of so many. After being injured in an attack by militias, the East and Horn of Africa Human Rights Defenders Project assisted Ahmedsadik to flee to Uganda where he received a successful operation to remove remaining bullet fragments. After being granted refugee status, his case was referred for resettlement in the United States of America. However, during an interview his translator did not state the facts as Ahmedsadik presented them, and as a result his case was rejected on allegations of fraud. It is clear, he implores, that Somalia is one of the most dangerous places for journalists to work, and with continued threats and attacks on the media and HRDs there is no hope of going back.

In Uganda he, amongst other Somali refugees, do not receive the necessary protection from the UNHCR, his voice adding to those who have already gone before, highlighting the major challenges facing refugees and exiled HRDs during their interactions with UNHCR. Girma describes how the overall treatment and procedures of the UNHCR are inhuman and unacceptable, citing the UNHCR as assuming an uppermost role in rewarding dictators such as Ethiopia’s Meles Zenawi. Sadly, Kiflu says, in spite of damning reports on Ethiopia’s grim and worsening human rights record by credible international human rights groups, the UNHCR seldom intervenes on behalf of Ethiopian asylum seekers here in Uganda or elsewhere in the world.

Kiflu draws our attention to how, on top of bearing the brunt of the problems facing all refugees, HRDs are also threatened by Uganda’s flagship Refugee Act 2006, a piece of legislation praised by the United Nations High Commissioner for Refugees as being ‘a role model for Africa’. Article 35/d and e declares that no refugee can involve themselves in ‘any kind of political activities in Uganda against any country including his own’. Even with credible evidence of his country’s grim and worsening human rights record, and the ‘no peace, no war’ tensions of Ethiopia’s border areas displacing thousands internally and externally, the policies and practices of neighbouring countries are posing a very serious threat to those HRDs who seek to continue their peaceful activism in Uganda. In spite of the notion that all United Nations member states uphold the Universal Declaration of Human Rights, we are seeing nations close their borders on asylum seekers, ganging up to have them repatriated to countries where they face significant danger. In Kenya, on top of turning down the bona fide requests of Ethiopian asylum seekers, crimes of rendition and abduction, handing over refugees to the Ethiopian regime have been committed. It was in this fashion that two Ethiopian refugees named Mesfin Abebe Abdissa and Tasfahun Camadaa Gurmessaa were handed over from Kenya to the regime in Addis Ababa, undergoing severe torture, and sentenced to death and life imprisonment respectively.

Ethiopian asylum seekers who have become aware of this danger in Kenya and Sudan avoid lodging their request for asylum, instead travelling to Uganda, where they are being increasingly rejected under the auspice that ‘you had to lodge your request to the first country you entered’. Drawing upon his experiences and those of his fellow exiled HRDs, Kiflu gives us a new definition of ‘refugee’: R-Rooted out, E-Exiled, F-Frightened, U-Unwelcome, G-Globally shunned, E-Expendable to capricious politics, E-Eternally endangered.

International organisations, their panel demonstrates, need to adapt their working policies and strategies to protect and help human rights defenders both in their home countries and in exile, exposing systematic repressions and highlighting how human rights defenders face challenges imposed by the rule of law used by authoritarian states to silence and repress, and the rule of law suppressing their voices in exile.