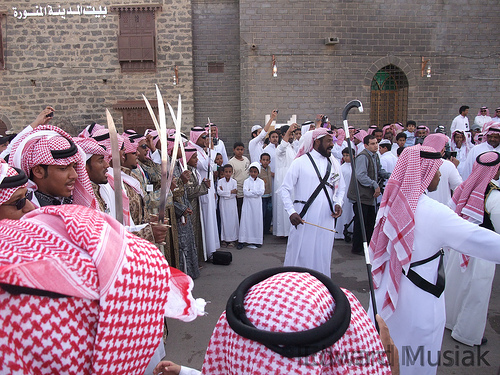 Taking away the abstraction from beheadings in Saudi Arabia

The condemned, regardless of gender, is given a tranquilizer and taken into what is usually a public square after a daily midday prayer. The prisoner cannot see anything, only imagine the gathering public from behind a blindfold.

The police lay out a large sixteen-foot sheet on the ground. The prisoner is put in the middle; barefoot and shackled. He or she is made to face Mecca before the imminent execution. Next, an Interior Ministry official reads aloud the name of the accused and the crime. Soon, the executioner swings around a traditional Arab scimitar before approaching the prisoner. He jabs the prisoner in the back causing the head to rise on reflex and, with a single swing, decapitates them. A trained doctor standing by then sews the head back onto the body as it’s taken away in an ambulance and buried in an unmarked grave in a prison cemetery. Amnesty International reports the bodies hanging up on poles to serve as a deterrent to crime, though the frequency of this occurrence is uncertain. However, this is the reality surrounding most beheadings in Saudi Arabia.

Saudi Arabia is a nation that practices modern capital punishment. Any execution is gruesome, but there must be international awareness and discussion about the practice and the excessive brutality that accompanies each incident.

The criminal justice system in Saudi Arabia is based on a literal interpretation of Sharia law. The death penalty can be imposed for a wide range of offenses: murder, sexual misconduct, armed robbery, treason, adultery, fourth offense of theft, drug smuggling, witchcraft, pedophilia, home invasion, terrorism, blasphemy, sedition, apostasy, idolatry, rape, carjacking, homosexuality, prostitution. The death penalty can be carried out by stoning, shooting or scimitar beheading, the latter being most common.

In terms of the frequency of these executions, 2007 was the modern record year with 153 men and three women executed. 102 people were executed in 2008, sixty-seven in 2009, and twenty-six in 2010. Forty-seven women have been publicly beheaded from the early 1990s up to 2010; before then the policy was for them to be shot or stoned. Currently, the 2011 total number of executions has already reached twenty-six. Most executions take place in the three major Saudi Arabian cities Riyadh, Jeddah and Dahran.

Lawyers are typically absent from criminal proceedings, which violates the Universal Declaration of Human Rights. However, the government of Saudi Arabia does not subscribe to the Declaration, stating that it fails to take into account the cultural and religious traditions of Sharia law.

Governmental international organizations have yet to draw the line on the moral acceptability of this issue. Can public executions truly be an acceptable part of any culture? It is time for a serious international inquiry into the limits of moral relativism and how to prevent excessively violent acts from being carried out by governments themselves. Then again, the line has already been drawn with laws such as the Universal Declaration of Human rights, yet no one is willing to take action considering Saudi Arabia’s importance in global oil supply. Moreover, some activist organizations have accused Western media outlets of intentionally underreporting the issue; they charge Western governments with wanting to avoid mass public outrage on the issue. Considering Saudi Arabia has served as an ally to the United States in the Middle East, that accusation falls somewhere between probable and feasible.

It is difficult to get true insight into the institutions of the Saudi Arabian system of law. In a rare 2003 interview the leading executioner in Saudi Arabia, Muhammad Saad al-Beshi, gave an interview to Arab News. He stated that he was proud of doing God’s work and that he had executed numerous women and men. "When they get to the execution square, their strength drains away. Then I read the execution order, and at a signal I cut the prisoner’s head off," he said. Al-Beshi had no qualms regarding his profession, stating he is content with the work he is doing.

It is important to note that foreigners are also subject to Sharia law, which only adds to the question of how to deal with Saudi Arabian moral inclinations, or lack there of. Effective August 1, Indonesia banned its citizens from going to Saudi Arabia as migrant workers following the beheading of one of its citizens in 2011, Ruyati binti Sapubi, who was working there as a maid. After her death, her corpse was dangled from a helicopter. Her family did not know about the execution until after it happened, something the Saudi government has apologized for, but details about her trial and why she had killed her employer are unclear. Many human rights activist organization claim she suffered abuse from her employer. She was not given a lawyer.

The ban does not affect the migrant workers already abroad, but already it is projected to cost both economies a substantial amount, particularly Indonesia, since 1.5 million of its citizens find work abroad in Saudi Arabia. The ban also comes on the tail end of many other issues of the mistreatment of Indonesian workers in Saudi Arabia, particularly maids such as Sapubi.