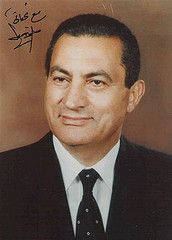 And what it means for North Africa.

After the uprising earlier this year in Egypt, former President Hosni Mubarak was forced to step down. He now faces justice in the Egyptian court with charges of corruption and ordering the killings of protesters in Tahrir Square. His two sons and some of the top Egyptian officials are also on trial. Mubarak faces the death penalty if found guilty, a punishment that about 67% of the Egyptian population agrees with.

The historic and unprecedented nature of this trial is difficult to miss. Former Tunisian president Ben Ali fled to Saudi Arabia when it became clear that he would no longer be able to continue his reign. His trial goes on in Tunisia without his presence—Ben Ali is still in Yemen. Colonel Gadhafi’s forces keep fighting the rebels in Libya without an easy end in sight. Saddam Hussein was tried and hung but with the supervision of the American forces. Mubarak, however, is being brought to justice for the wrongs that he has done by his own people.

What does this mean for the Egyptian people as they struggle to bring the regime forward? And what message will the trial send to the rest of the Middle Eastern leaders, especially as the fighting continues in Syria?

To some, the flaws of the trial are obvious. The system by which Mubarak is being judged has not changed significantly. The Arab Spring has similarities to the revolutions that brought an end to the communist era in Eastern Europe. However in the case of the end of the USSR and communism, countries such as Romania did not try their leaders. Government officials were prevented from running for office following the fall of the communist government, which ensured the abolishment of the oppressive regimes. However in the Egyptian case, army officials remained in the transitional government. In fact, field general Mohammed Hussein Tantawi was one of Mubarak’s protégés. Justice will therefore only sever the head without removing the body under it. It is difficult to imagine that a new democratic system can be created under these circumstances.

Yet, does the true nature of this trial come more as a need for revenge than justice? On the first day, Mubarak was wheeled into the courtroom in his hospital bed. Some spoke of humiliation since he is forced to go through this process as he struggles to fight cancer. The desire to bring justice after years of oppression is warranted, but it does not need to be characterized by a lack of humanity.

As the trial continues, new issues arise that compromise the true nature of this endeavor. The historical character of the trial revolves around the fact that Mubarak has been accused by his own people and will now be tried in plain view. However, the judge made the decision to prevent live television broadcast as was previously allowed. The reaction of the public was clear—how can Egyptians know if justice is being served if the process is hidden? Such a lack of transparency leads to doubt of the current system.

Mubarak’s charges revolve strictly around the events of the February revolution, where he allegedly ordered the killings of 850 protesters. However, this does not consider the events that led to the anger of the population. In order to truly seek justice, Mubarak should be charged for more than the events of February.

The desire to bring democracy and justice to Egypt is reflected in this trial. After thirty years of corrupted and tyrannical reign, Egyptians finally win. Egypt has laws; laws that Mubarak is not above.

This process is neither about the future, the next coming elections, nor the political system that will arise from the trial. It is about the population making peace with the past thirty years as justice is being decided. Turning the page is an important process—especially since so much tragedy has occurred. Much in the same way that South Africa had the Truth and Reconciliation Commission, this serves for Egyptians as their form of resolution with the past. Therefore, though the details of the trial might be underwhelming from a Western democratic point of view, it is enough within the context. Perfection is not necessary; the trial serves as a first step as well as a precedent. The next presidents of Egypt will not take advantage of the population any longer; there will be a zero tolerance policy.

It is not only important for Egyptians but it sends a clear message to leaders of the Middle East. The era where citizens involuntarily bend to the will of their leaders are evidently over, as was seen during the Arab Spring. Many of the leaders of the Middle East have been in power for decades now. It was expected that the population had very little say in political matters since the elite were the one with the money and therefore the power. The first priority for the population was ensuring that they had food and shelter in a struggling economy. With the example of Mubarak, accountability for a leader’s actions is to be expected. It will serve as an eye opener for many of these despotic heads of state.

There are many issues with this trial but Egyptians have fought hard and have paid with their lives. Therefore this is their victory.