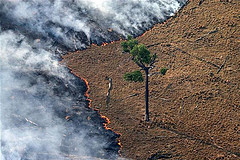 REDD: The Good, the Bad and the Ugly

Forest governance, land ownership and management are critical issues for millions of indigenous peoples and forest dweller all around the world whose subsistence and cultural identity is rooted in the forest environment. Deforestation therefore constitutes a severe threat for these peoples.

Amidst climate talks, and considering that deforestation accounts for around a fifth of total global carbon emissions, initiatives aimed at protecting forests through their monetization have flourished. Amongst others, REDD, Reducing Emissions from Deforestation, a UN-backed program, was adopted in 2005. Since then REDD projects have been implemented in countries in the Global South.

REDD, which has for main aim to create incentives for people and investors to protect rather than destroy forests, has spurred a lot of controversy. It stems from the fact that forests targeted by REDD include areas heavily populated by indigenous peoples and forest-dependent communities. For them, REDD projects could mean a drastic change in their traditional way of life as their rights, interests, and livelihoods are at stake. Some claim the carbon market solutions are not about mitigating climate, but are in fact greenwashing policies—followed for symbolic rather than environmental reasons—that allow fossil fuel development to expand.

On the one hand, REDD initiatives could create jobs and cut emissions cheaply as the use of new technology is not required, They could stimulate community forest management as well as eco-tourism at the same time as yielding local environmental benefits such as reduced soil erosion, increased water quality, and biodiversity. Developing countries could for the first time receive money to protect the forests they depend on.

On the other hand, REDD is a program that the UN admits is high risk. REDD has the potential to be beneficial or terrible for communities depending on how and who manages the project. Recent experience has shown for example that the REDD strategies, which are well advanced in Indonesia, Ghana, Mozambique, Tanzania and Vietnam, have focused on how to count and monitor carbon rather than major policy and capacity changes.

In some countries, communities might own the land but trees belong to the government. For example, in Indonesia, land rights are ferociously fought over not only because a large part of the forests have never even been surveyed but also because the state owns the forests and therefore the carbon credit that they could derive from protecting it. Analysts even fear that REDD could result in increased land grabbing and consequently forced evictions, as marginalized people will be pushed away by companies trying to measure and assess the forests they inhabit and live off.

In Peru, REDD puts twenty million hectares of indigenous territories at risk for which the populations inhabiting the land have no legal recognition. Amidst the adoption of REDD, the Peruvian government has passed legislation nationalising the Amazon, while indigenous peoples claim it belongs to them. The government’s actions have led to protests where between forty and eighty-five people were killed in 2009.

Many organizations rushed to develop REDD projects where a lot of money is involved, rather than used a top-down approach. People who live in these forests themselves are not involved in the process and are marginalized. Local communities are supposed to earn a share of REDD credit sales and in turn invest it in health care, education and a variety of projects to benefit communities. Yet, out of 144 projects reviewed by the International Institute for Environment and Development, “only one included a proposal to make community-managed forests or indigenous peoples’ rights a binding part of REDD.”

REDD, by placing trees as part of a property rights system, which entails the privatization of forests, would allow countries to buy their way out of reducing their emissions by buying the right to pollute through carbon credit, argues the NGO Friends of the Earth International. In order to avoid this situation, the main drivers of deforestation, such as the production of agrofuels, meat and timber, should be better regulated. Additionally, if there were too many carbon credits available on the market, the price of carbon would collapse, which would most likely result in people carrying on business as usual and resuming to logging activities.

The NGO added that REDD proposals are open to abuse by corrupt politicians and illegal logging companies. In several countries of the Global South where a REDD project could take place, lack of funds combined with weak governance or corrupt leaders are obstacles to effectively monitoring and policing forests. Moreover, most countries involved do not have the funds and capacity to evaluate and assess their forests carbon measurement. There is no agreed way to measure the carbon content of vast numbers of trees.

There is also fear that REDD initiatives could lead to leakage; while conservation is favored in one area, deforesting activities or illegal logging take place elsewhere at a regional or national scale. In order to avoid international leakage, the mechanisms must provide sufficient incentives for most if not all tropical forested countries to join in. Due to leakage, UN data shows that rates of deforestation in Bolivia overall have gone up, not down, with a 4.4% rise between 2000 and 2005.

REDD also raises paradoxical issues, as companies which decide to improve their practices by setting aside for example a parcel of their land for conservation are going to be compensated while people who have maintained their forests for years receive nothing. For example, Costa Rica, which has made remarkable effort to curb deforestation and even increase its forest cover in recent years, will not receive any benefits from this program.

The Case of Bolivia

A fourteen-year-old forest conservation initiative was renewed as a REDD project and implemented in Bolivia. The project, which doubled in size, led to the expulsion of loggers and installation of forest rangers with funding from corporate sponsors, including the oil giant BP and America’s largest coal burner, American Electric Power. The plan is to reward corporate philanthropy with carbon credits equivalent to half the amount of carbon fixed in the forest while the rest would be granted to the Bolivian government. To date, carbon auditors say the project has prevented emissions of more than a million tons of CO2. But one day, the partners will sell their carbon credits against their own emissions back home, or sell them in the carbon market likely to emerge under REDD which means that these emissions are not avoided but will only take place somewhere else.

REDD offers both opportunities and risks. Forest movements and forest policy experts emphasize that REDD has the potential to be successful only if it is based on the recognition of rights, respect for the principle of free, prior and informed consent and requires for progressive forests sector tenure and governance reforms. If there was agreement, it should be under either the UN Declaration on the Rights of Indigenous Peoples or any other human rights instruments and forest conventions. The extent to which indigenous populations have a say will determine if REDD is successful or not.

Geneviève Lavoie-Mathieu is a recent graduate from McGill University with a degree in International Development Studies, currently undertaking an internship at the Potsdam Institute for Climate Impact Research.