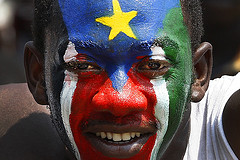 Past, Present and Future: An Overview of South Sudan

The Republic of South Sudan has endured a difficult coming of age. Its future remains uncertain as this young nation in Africa takes its first steps towards adulthood.

Optimism towards its new nation status as well as trepidation regarding the challenges ahead mix as fluidly as oil in the streets of Juba, the nation’s Capital and largest city. As the youngest and one of the poorest nations on earth, South Sudan has what some have called the worst health situation in Africa. Media reports reflect conflicting visions and highly polarized speculation on what lies in store for a country whose ambitious motto lauds "Justice, Liberty, Prosperity" for all its citizens.

Prior to Sudan’s independence, British rulers intended to join South Sudan with Uganda due to their demographics, however these aspirations were circumvented by the Juba Conference which unified the North and South of the Sudan.

After achieving independence from Great Britain in 1965, the predominantly Muslim north of Sudan with its capital located in Khartoum became the main centre of political power. However the South of the country as well as the state of Darfur in the West contained most of the country’s natural resources. Limited access to education in the South as well as feelings of discrimination towards Christians and black people by the predominantly Muslim and Arab political and financial elite lead many southerners to feel marginalized.

As the situation progressed, the mineral-rich and predominantly Christian population of South Sudan felt that their resources were being exploited to the benefit of the North and that they were not being compensated. In short, people in the South felt that Khartoum was selling their oil, natural gas and minerals and keeping the money for the benefit of the North, with little, if any, of the wealth trickling down to Juba.

The perceived inequality of their situation led the population of what is now South Sudan to demand independence from the North. This resulted in two civil wars and tens of thousands of deaths followed by the signing of a “comprehensive peace agreement” in 2005 and the eventual the ratification of the South Sudan autonomous region.

The population of this region was given the right to a vote for independence as part of the peace agreement and after an overwhelmingly pro-separation vote (98.83 per cent of the population) the country became an independent state on the July 9, 2011. South Sudan’s elected president Salva Kiir Mayardit ratified the nation’s new constitution on July 7, 2011, replacing the Interim Constitution that had been in effect since 2005. The youngest nation in the world quickly moved to UN membership status and joined the African Union.

Relations between Juba and Khartoum have been predictably tense since independence, with violence erupting in the border region of Abyei. The Republic of Sudan took military control of Abyei in May of 2011, leading to the South Kordofan conflict between the Sudan People’s Liberation Army (from the South) and the Sudanese Armed Forces (from the North) centered in the Nuba Mountains. While the Abyei region was hypothetically scheduled for a referendum to decide whether to remain in the Republic of Sudan or join the newly independent South, nothing concrete has materialized.

Sudanese President Omar al-Bashir retracted his pre-election offer of dual citizenship between the two Sudans after independence was declared. Al-Bashir has also proposed a partnership with the South following the “EU model.” Egypt’s current President, Essam Sharaf visited both Juba and Khartoum prior to the South’s secession. Israel, which hosts a large population of South Sudanese refugees, was one of the first nations in the Middle East to recognize statehood. The Arab League confirmed that South Sudan would be eligible for member or observer status should it wish to apply. The nation has announced its intention to join a number of other establishments such as the Commonwealth of Nations, the East African Community, the International Monetary Fund and the World Bank.

The United States removed political and economic sanctions from South Sudan after independence. However because it continues to impose these sanctions on the nation’s neighbour to the north, analysts have speculated that the sanctions will still effect the South, whose oil exploitation, financial sectors and transport industries remain linked to Khartoum.

Religious, ethnic and cultural differences between North and South Sudan have been attributed to “geographical barriers” that stopped the spread of Islamic culture in the region and enabled it to hold on to its original demographics. There are over sixty distinct languages spoken in South Sudan, with five predominant ethnicities comprising the Dinka, Nuer, Shilluk, Azande and Bari. While the official language of South Sudan remains English, in August South Sudan’s ambassador to Kenya recommended introducing Swahili as the new lingua franca in an effort to replace Arabic and showcase the Nation’s commitment to the East African Community over the North African and Arabic speaking world. Nomadic tribes of Baggara Arabs reside in the border regions of South Sudan—some permanently, some temporarily—and Arabic remains widely spoken. There is a community of Spanish speakers, numbering about six hundred who were raised in Cuba during the wars. These “Cubanos” have settled mainly in Juba since their return. Religions practiced in the country include Christianity, Animism and Islam.

Despite the spirit of optimism expounded by politicians in the new nation, South Sudan continues to face many challenges. The nation’s capital, Juba, doubles as the state capital of the Central Equatoria region. It is not centrally located and suffers from over-crowdedness as well as a number of other issues related to urban planning, transport and infrastructure. As a result a project has been adopted by the government to build a new “planned” capital city.

The country’s health situation is apalling. Infant mortality is high, at a rate of 112 children per 1,000 dying before the age of five and the country holds the worst maternal mortality rate in the world. In the wake of conflict with the North, South Sudan boasted a total of three surgeons and three hospitals, which equated to one doctor for every 500,000 people in some areas. HIV is reported at 3.1 per cent and over 90 per cent of the population is reported to live on less than one dollar per day. Famine is said to have caused deaths in 2011 however the local governments in the affected areas deny such allegations.

South Sudan continues to wage war against about seven armed guerilla groups that are represented in over 90 per cent of its territory. The rebels accuse the government of corruption and say that they want better representation for all people as well as balanced funding in rural and urban areas.

In a report credited to Al-Jazeera the current government has had difficulty transitioning into its new role and members on the nation’s largest newspaper The Citizen alleged harassment from authorities. This is despite the government having promised media freedoms as a part of the new mandate.

As is to be expected from such a young nation, South Sudan faces economic uncertainty. Above the mainly agricultural subsistence farming practiced in the rural areas looms the specter of increased logging of the forests as well as oil and mineral exploration. The nation has potential in terms of natural resources, a rich and diverse habitat and is home to the second-largest wildlife migration on earth.

The challenge of striking the delicate balance between economic development and preservation of the country’s natural habitat remains in the hands of the new government, which during its tenure as the SPLA was accused of war crimes as well as humanitarian atrocities including systematic torture, rape and other forms of violence against civilians.

The wave of optimism that was felt across South Sudan following the momentous referendum and secession has died down and the mood has become more practical. Many feel that it is now time for the government and the people of the republic to work together in order to overcome the numerous challenges they face as the world’s youngest nation.