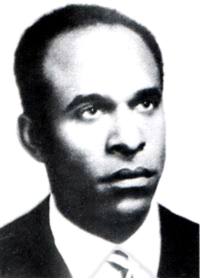 The Sunrise of the Damned

The road to liberation remains long…

Franz Fanon only got to see the first fires that were the false dawn of African independence. Sickness took him before the hope forged through liberation struggles dissolved into the neocolonial night, itself only marginally less intolerable than the darkness of imperial domination.

Would he have been surprised at the state of Africa? We can be so bold as to say no! In fact, nothing of this story of fraud and betrayal would have surprised he that understood and explained the ravages of domination, the complexities of subjugation, and the culture of a colonized residual elite.

The reality of African independence enunciates itself thusly: the liberators, more or less legitimate, transformed themselves into their people’s jailers, into dictators in the service of the old colonial power. Their heirs are in essence elements of predator networks of black skins with white masks, to borrow Fanon’s oh-so explicit terms.

Fifty years later, the judgment is incontrovertible: the independences did not end in the liberation of the oppressed peoples. From presidents for life to military pronuncimientos, and from putsches to civil wars, Africa North or South of the Sahara is, with precious few exceptions, a continuum of tyrannies. Societies remain orphans of states that were never born: the neocolonial networks imposed potentates that they changed to suit the whim of their interests. Nothing really changed even if, fall of the Berlin wall oblige, one-party rule gave way to a façade of democracy.

If neocolonial structures do not alone explain the failures of the independences, this half-century has been an unpitying demonstration of the effectiveness of the time-bombs left behind by the colonial powers.

Territorial demarcations were thought up to deeply poison relations between newborn states, military elite – like in Algeria or Angola – and civilian eilte – as in West Africa – were made responsible for the administration of their former master’s legacies for the latter’s benefit, and for that of the former metropoles. Ethnic separations maintained or else deliberately created – as in the case of the Great Lakes region of Africa – prevented the creation of states deserving of the name in the service of their populations.

The colonial violence was followed by an indirect violence - that inflicted by Africans. The imposed and maintained tyrannies served to free a paternalist and racist discourse in the style of “it was better during the colonial era”. It is no accident that a law glorifying colonialism could be tabled in a country with a dark colonial past, almost fifty years after the independences. A compulsion for non-repentance, or the justification of a bloody past, is the stark manifestation of the vitality of a colonial ideology that claimed millions of victims.

The colonial order contaminated the colonizer’s territory. Through a paradox which history holds the secret to, “the natives” are ubiquitous today. Not only in their area of origin, but equally also in what Fanon used to call the “forbidden cities”— European citadels where new forms of discrimination are practiced. European descendants of colonized peoples, those French “from diversity” are accorded inferior status.

So Fanon appears more current than ever today, both in Africa and in Europe. He makes sense to African freedom activists and human rights activists, he makes sense as well to so many Africans and Arabs of Europe against whom uninhibited racism is currently expressed in the media.

He makes sense since emancipation remains the first objective of generations that today have achieved political maturity. Many Africans have learned that the fight for liberty, democracy and human rights is led not only against local potentates, but equally against the neocolonial tenants that protect them, use them to pillage resources, and eject them when they have done their time. Many young intellectuals were able to measure the currency of Fanon’s analysis during the infamous speech in Dakar where a French head of state, speaking somewhere between abhorrence and approximation, delivered a fantastic version of the black man’s place in history, absurdly, sterilely turning in circles.

These fifty first years of formal independence are definitely but the sunrise of the damned, a painful and tragic sunrise. Fanon announced the end of the atrocious colonial night and the fights to come. The road to liberation remains long…

Mireille Fanon-Mendès France is President of the Frantz-Fanon Foundation, and a Member of the Bureau of the French Jewish Union for Peace