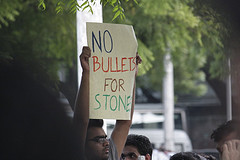 From the ramparts of the Red Fort, celebrating the 64th anniversary of India’s Independence, Prime Minister Dr Manmohan Singh, offered to hold dialogue with the agitating youth of Kashmir if they “abjured violence”. Since June 11, the youth of Kashmir have been agitating for Azaadi (freedom, self-determination).

All over Kashmir, people defying curfew orders are holding rallies, demonstrations, sit-ins, mass meetings and hartals (general strikes). They are willing to hold a dialogue, however they want New Delhi to immediately repeal the Armed Forces Special Powers Act, remove all central security forces, and release all political prisoners. Those who visited the valley in the early nineties, when the movement for self-determination began, might see glimpses of the past in today’s struggle. However there are two major differences.

Unlike the earlier movement, which was dominated by armed groups, the current movement for Azaadi has rejected guns. The Jihadis, the Mujahideens or the militants, who are classified as terrorists by the Indian government, are nowhere in the picture. This movement was launched by the local youth. It is being led by locals and, in fact, has made the so-called Separatist leaders virtually irrelevant.

In the early 90’s the movement began as a popular struggle. Hundreds of thousand of Kashmiris— men, women and children— were on the streets demanding Azaadi. India sent its army and a mixed-bag of paramilitary forces to carry out a valley-wide campaign of cordon and search, abduction, torture, killing, rape and burning of religious shrines, houses, bazaars, and buildings. The campaign spread across the valley; shooting people on suspicion, setting-up bunkers on almost every road junction, erecting roadblocks and check points, forcing passengers to get down from buses and private vehicles and frisking them on the roads. The civilians retreated to their homes— they were terrorized.

Today, the movement for Azaadi is led by the youth who grew-up seeing their parents thrashed by soldiers. They trembled and hid under their beds when soldiers broke into their homes in the dead of the night. They saw their neighbours and relatives marched to the outskirts of their villages, and they shivered when the sound of gunfire pierced their ears. When their fathers, uncles, and elder brothers did not return home, they understood. They learned of rape as their mothers, aunts, and sisters cried quietly to cover their shame. Today’s youth, unlike their elders, do not know what peace is. They never played games, they grew old far too young.

They identify India with army and paramilitary forces. Their worldview is overshadowed by their experience of death, depredation and degradation. They have been robbed of their dignity and humanity. They are not afraid of the guns. They are ready to make the supreme sacrifice.

They shout— “We want freedom! Go India, go back!” When stopped by the security forces or pushed back, they throw stones. They know the security forces will kill them. During the last 70 days, 61 persons have died in the streets of Kashmir.  The agitation intensified in the beginning of August. In the first week of the month, 21 Kashmiris had fallen to the bullets of the Central Reserve Police Force (CRPF) and Kashmir police.

New Delhi woke up to the deepening crisis in Kashmir. Prime Minister Dr. Monmohan Singh held a meeting with representatives of the mainstream political parties. He addressed the people of Kashmir on 10 August. Singh regretted the killings and called for dialogue with all sections of the society to put an end to the unrest. Ironically, during the ten days that followed New Delhi and the State government intensified their efforts to bring peace in Kashmir, and another 14 persons— including a nine-year-old boy— were killed by the CRPF and police.

Sonia Gandhi, Chairperson of the ruling United Progressive Alliance in India’s Lower House of Parliament and President of the Congress party, has joined Singh in the government’s efforts to bring peace to the valley. In a recent statement, she expressed anguish “at what has been happening in the Valley.” India’s Chief Minister of Jammu and Kahsmir, Omar Abdullah, and Home Minister Chidambaram have refused to repeal the Armed Forces Special Powers Act. The latter claimed that he could not amend certain sections without first consulting all the stakeholders. Evidently the people of Kashmir who are out on the streets demanding its immediate repeal are not considered to be a “stakeholder”.

New Delhi demands that Kashmiri youth “abjure violence”, and asserts that Kashmir is an “integral part” of India, that the solution has to be within the framework of India’s constitution. But what good comes from a precondition like “abjuring violence”— the ongoing mass movement in Kashmir is non-violent. There are no militants or terrorists lurking behind the agitators. There are but youth that have only ever seen the brute face of India, and see themselves as the victim of the Indian constitution upholding the Armed Forces Special Powers Act. New Delhi’s terms are difficult to envision, Azaadi remains a mirage.

Tapan Bose is a noted human rights activist and the Secretary General of the South Asia Forum for Human Rights.