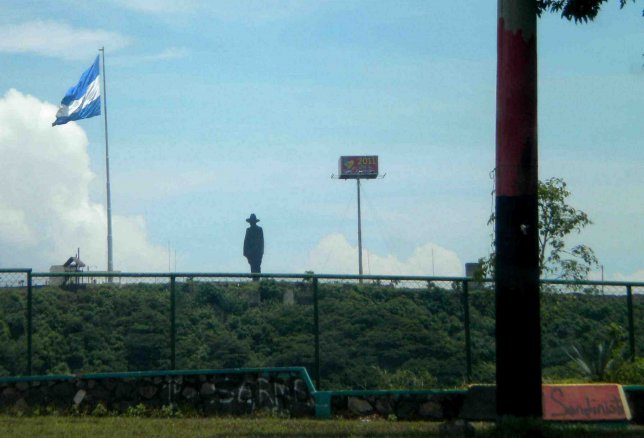 In the Shadow of Sandino

“The election looms in the coming days; it is an amazing scene of lies and manipulations. If Ortega wins there may be a civil war here. It is quite tense,” my father warned me before my last visit to Nicaragua in 2006.

Nicaraguans struggle to make ends meet in the wake of political upheaval and natural disaster in what remains second only to Haiti among the poorest countries in the western hemisphere.

After my father picked me up at the airport we drove to his home in Masatepe, a small town in the Nicaraguan highlands near Managua that I had not seen since I had visited him four years earlier. “There are more and more North Americans coming here,” he said. “ Nicaragua is being toted as the place to be. Funny, I hope someone is telling them that we don’t have water or electricity these days. ”

After a week in Masatepe I went to stay with my friend Ronaldo in the small jungle town of Escalante, when I had visited in 2002 it had been inaccessible to cars and the only way to get there was by ox cart or horse. Now there was a road leading up to the village.

On our way, my father and I stopped in at a garage in the outskirts of town. The mechanic asked me if I spoke Spanish, I said I did, he laughed, “I know sixteen year old girls who can put together an AK47 faster than you can count to ten in Spanish.” I laughed; this was exactly the kind of humour I remembered.

Ronaldo’s father is missing an arm, “It was cut off by the contras,” he told me. Stories of senseless killing abound, “During the conflict, night curfews were imposed and if we left our homes we would be shot.” He explained how men and women were forced to fight for whatever side controlled the area where they lived, “families were torn apart and sons were made to kill their own fathers, mothers and daughters were raped by both sides.”

The day after I arrived, a neighbour of Ronaldo’s asked if I wanted to see something uniquely Nicaraguan. Although it’s illegal in most countries, the sinister sport of cock fighting was and still is a popular pastime here with old men betting on the outcome of every match. Curiosity got the better of me. I went to visit the roosters who would be fighting in the next day’s tournament. Opening a small box, the man showed me a set of sharp blades shaped like talons. He explained that these blades are attached to the feet of roosters before a fight. I declined to attend the match.

The gap between rich and poor in Nicaragua is remarkable. The nation was the richest in Central America prior to the revolution and American intervention, but it is now amongst the world’s poorest. Maria Loaiza Arroyo works with a Latin American organization called Un Techo para mi Pais which operates 15 countries in Latin America. According to Arroyo, the number of Nicaraguans living under the poverty line is approaching 2.5 million. Almost half the population.

Many people in rural communities are disillusioned with the bitter fruits of their own blood and tears. However many still idealize Augusto Sandino, the revolutionary socialist leader who waged a guerrilla war against US occupation in the 1920s and 30s. His political descendants went on to form the Frente Sandinista de Liberación Nacional and overthrew the government of President Anastasio Somoza Debayle in 1979, which opened another generation of conflict that has yet to heal.

Daniel Ortega, long-time leader of the FSLN, fought off an American-funded insurgency of “contras” in the 1980s, and remains a controversial figure. Ortega stands accused of sexually assaulting his adopted stepdaughter and his property redistribution program was seen by some as a giant land grab. That didn’t stop him from winning the election in 2006.

Billboards reading ‘Cristiana, socialista, solidaria’ in the colours of the Sandinista Party, others with Daniel Ortega’s face, and many commemorating the Sandinista revolution abound in the capital, says Arroyo, “The signs that say ‘we are all sons of Sandino’ show that the ideals of the revolution are very much alive, but the people who are enforcing them are as corrupt as the next politician. It is getting harder and harder everyday to remain happy with the status quo.”

Although she paints an overall picture of Nicaragua as a country with severe economic and social problems, Arroyo has some hope for the future. The hurricane in 2009 had a disastrous effect on the economy, but she believes that the country has great potential, “if it is developed in a conscientious way, which in my book means not much interference from greedy Americans and Europeans— and more government investment on small and medium local enterprises.”

A week after I left Nicaragua I was walking down a street in San Jose, Costa Rica. A construction worker stopped me and held a machete to my head. When I didn’t respond, he broke out into fits of insane laughter. I was terrified. Only after did I realize how close I had come to death, but my then-girlfriend’s reaction made me uneasy, “He must have been Nicaraguan. They are violent and dangerous people.”

My father often refers to Nicaragua as striking in its realism. He describes the Nicaraguan personality as “light and dark, but with the heart always seeking the light. It is why I am so in love with this part of the world.”

Michael Bramadat-Willcock is a filmmaker and student journalist at Concordia University.