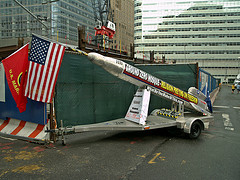 Ginned Up to Bolster Support for the Disastrous Wars in Afghanistan and Iraq?

At its core, the controversy surrounding the proposed Islamic community center in downtown Manhattan is not about religion. It’s about war.

For some years now the fear factor that followed the attacks of September 11, 2001 and fueled public support for the “global war on terror” (or the onomatopoetic “GWOT”) has been diminishing. Along with the long and intense work of the antiwar movement and the rising levels of casualties, fear reduction has played a key role in building opposition to the wars. Part of that process has been the growing normalization of the site of the 9/11 attacks in New York. “Ground zero,” the site of the destroyed World Trade Center, is now a busy construction venue in the midst of a hectic commercial district that includes all the usual hodgepodge of convenient and useless, businesslike and tawdry aspects of Manhattan street life: Office buildings and food vendor carts, coffee shops and strip joints. There’s nothing hallowed about it.

That normalization hasn’t yet made possible the kind of serious national debate this country so desperately needs. That debate is not about September 11, but about September 12 – the day George Bush launched a war our country was now going to wage anywhere he chose against whomever he designated for as long as he wanted without any restrictions. The whole world – though most especially the peoples of Afghanistan and Iraq, as well as those of Yemen, Somalia, Palestine and Kenya, and so many more places – as well as those of us here in the U.S. continue to pay the price.

But the “mosque at ground zero” controversy (which of course we know is not actually about ground zero or an actual mosque at all) erupted in a very specific place in a very specific context for a very specific purpose. It wasn’t launched by New Yorkers because it was never about New York. It’s not insignificant that as the New Yorker has pointed out, opposition appears “roughly proportional to distance” from New York: 31 percent of Manhattan residents oppose the planned Islamic center; but 53 percent of all New York City residents disapprove, and at the national level, opposition spikes to a dangerous 68 percent.

The controversy certainly is about all those things. And all of those are dangers that must be fought – passionately and powerfully – with a clear understanding that this most recent attack on equality is part of this country’s legacy of racism and intolerance. Andrew Sullivan, the right-wing iconoclast, of all people, had it mostly right when he said the campaign against construction of the Cordoba House project in lower Manhattan was “so dangerous in its assumptions, so pernicious in its bigotry …that it needs to be repudiated as swiftly and as powerfully as possible.”

Article courtesy of the fine people at AlterNet

Phyllis Bennis is a Fellow of the Institute for Policy Studies and co-author with David Wildman of the new Ending the U.S. War in Afghanistan: A Primer.