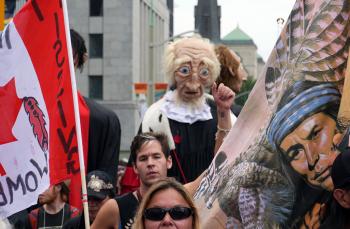 After the Peoples’ Social Forum (PSF) ended this weekend, tents at the University of Ottawa were left empty. Booths covered with art and information that lined the once busy streets had disappeared. There were no longer people standing on the corners of streets passing out magazines and independent film screening ads. But while the forum may be over, participants and organizers are hoping that its impact is ongoing.

The final event of the Peoples’ Social Forum looked to the future. It was the Social Movements Assembly. The assembly established a non-partisan extra-parliamentary opposition in order to enable the spirit of the convergence to work beyond the forum.

The PSF hosted over 500 workshops led by various groups across the country. Over 5,000 participants flooded the University of Ottawa campus. Movement assemblies, gathered at the Peoples’ Square, discussed various topics ranging from Indigenous Solidarity to Mining Justice.

At the final event, in order to represent the diversity of forces engaged in the PSF, each of the 19 movement assemblies presented a three-minute report on their conclusions., and the assemblies came together to build a unified front against austerity.

All the groups taking part in the forum were told that there would be a process involving movement assemblies that would culminate into a declaration. Workshops held on the last two nights of the forum fleshed out the details of the declaration.

The Call to Action declaration, handed out to attendees on Sunday, noted that the forum has given people brighter outlooks. "This forum has given us hope in our capacity to surpass our limits and to, together, overcome. We are politically united and shall be active in every corner of the territory where we are present," it said.

The declaration added that participation in the social forum was the result of the urgent need to stop attacks on democracy, and to free societies of neoliberal capitalism, imperialism, patriarchy, colonialism, racism, heterosexism and corporatism. It noted, "The Peoples’ Social Forum process has allowed us to intensify a convergence of an unheard diversity between our movements."

The ultimate purpose of the social forum was to create political discussion and powerful networking.

"It was to give a chance for people who don’t work in the same sector to meet and put their ideas together and then try to have a process where all the various assemblies would feed into the final assembly," said PSF organizer Roger Rashi said..

The forum, he explained, had a moral impact because it showed the determination of many social movements that are involved in daily struggles across the country. "It’s a show of intent, it’s a proposal to unite people in a common struggle rather than going about it alone," he said.

Creating a united front would help with present battles against austerity, but it would also enable people to look beyond the established system, added Rashi.

"There is an absolute necessity to unite and struggle together for a better world," he said.

Activism and resistance is part of a historical continuum, said Christine Jones of the Canadian Peace Alliance.

"We’re inheriting histories of resistance, we’re building on the back of others." "The reality is," said Jones, "That no matter where we are situated in this struggle and resistance we are all somehow working together. There is somehow a grand choreography of resistance that happens."