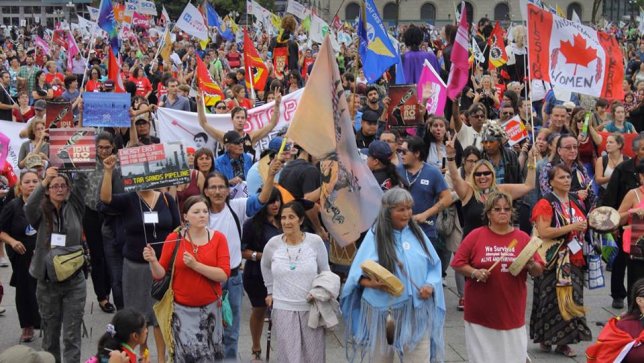 Peoples’ Social Forum 2014 and Beyond

Much has been said, for the most part very positive, about the incredible Peoples’ Social Forum, which took place from August 21st to 24th in Ottawa. Naomi Klein’s comment during her opening speech that the Forum was the most important meeting of social movements in Canada since the American Summit in April 2001 really resonated with me.

The comparison between these two events is striking given that the pan-American alliance of social movements that was born from a vast alliance in their struggle against the Free Trade Area of the Americas (FTAA) had a considerable impact in stopping that project in its track. Social movements in all countries involved in the FTAA (as well as Cuba) responded to this neoliberal assault by joining forces at the pan-American level to deploy a global strategy while they were at the same time actively mobilizing nationally and locally. This “movement of movements” so-to-speak was successful. But Naomi Klein also reminded us in that we were unable to put the necessary efforts to keep it alive in the future – which calls for vigilance at this important conjuncture!

In 2014, both the political and social success of the Peoples’ Social Forum show the incredible will and desire of activists from multiple social movements to work together in developing a common strategy in response not only to the Conservatives’ attacks on programs, but any government that might follow them. This mobilization is all the more pressing given that a potential reelection of Stephen Harper in 2015 would undoubtedly launch a new round of attacks on our movements.

Beyond the technical evaluations of the Forum, the fundamental questions we must ask ourselves are the following: How do we sustain what we started at the Peoples’ Social Forum in 2014? How do we build new bridges and solidify the ties we created during the Forum? Beyond our respective commitment and solidarities, how do we really create a lasting alliance between First Nations, Quebec and Canada that is indeed able to have an impact on the Conservatives’ agenda and policies? And how do we force other political parties to really distinguish themselves and propose real progressive alternatives?

The Peoples’ Social Forum was a historic and very necessary meeting of progressives hailing from the traditional “three solitudes” of Canada. The opportunities for a strategic alliance on thematic issues like climate change and human rights, for example, were necessary and important, but we must also acknowledge and respond to the fact that, just like during the times of the FTAA, all these groups are attacked by a common enemy.

The 30-month long process that led to the happening of the Forum from August 21st to 24th allowed for doors to be swung open and for trust-building between movements and people within these three communities. But our past is a heavy burden and there is much left to do. It is imperative that we choose to continue opening up and to invest in this process. Building a movement of movements in Canada must rely on the alliance that is currently being built between progressive forces in Quebec, Native communities and Canada, most notably, the labour union movement in the rest of Canada. Any follow-up to the Forum must function with this logic both as a political foundation and as an ultimate goal.

Nineteen thematic assemblies took place on August 23rd. Although results varied greatly from one group to another, the majority of Assemblies adopted common strategic perspectives. The Assembly of Social Movements on Climate Change, for example, suggested meeting again in October (date and location to be determined). The Assembly on Education also suggested meeting again to build on its program. Same goes for the Media Assembly which hopes to meet again as early as September. Many others have expressed wanting to meet again as well.

Many solid campaigns were also put forth. The Assembly on Democracy suggested creating a social political platform to force political parties to think differently. The Assembly on Social Services is keen on making the fight to keep Canada Post alive, which is at the heart of its struggle, with ambitions to create a large coalition of public services inspired by the Coalition Red Hand of Quebec in 2009. The Assembly on Mines suggested a national day against extractivism. The Assembly on Social Economy wishes to deploy an inclusive campaign that makes social economy a positive choice in the upcoming federal election. The Assembly on Palestine suggested to all organizations that participated in the Forum to adopt the BDS (Boycott, Divestment and Sanctions) campaign against Israel. The examples are many. If, like the final declaration of the Assembly of Assemblies reads, we wish to actively involve our networks in blocking the Conservatives in 2015, we must immediately implement these suggestions, on inclusive and participatory grounds in the same spirit of the Forum.

A General Assembly on the PSF to be Held Soon

As all these activities are being put into motion and in order to ensure that the PSF be a long-term process, it is necessary that debriefs be done at technical and political level, as well as discuss the perspectives with as wide as possible participation from all those who supported the Forum and its process until August 2014. A General Assembly could be organized as soon as possible to reach this goal. We left the PSF feeling energized and it’s important that we continue to put forth a global vision, shared by as many people as possible, of our process and our goals.

We must also consider other occasions for mass convergence, just like the Forum in August 2014. Perhaps a second Peoples’ Social Forum in 2016? It’s still too soon to speak of it, but during the second PSF General Assembly in July 2013, the delegates who participated agreed to move the PSF towards the West if a second edition were to take place.

Participating in the World Social Forum in Tunis in March 2015

An informal meeting of the International Council of the World Social Forum took place after the PSF on August 24th. The representatives of the organizing committee of the WSF of Tunis argued that the PSF’s dynamic would be necessary in Tunis. Historically, Canadian participation of the WSF’s different editions has largely been from Quebec. This time, it’s important that we send a delegation that is truly representative of the movements active at the Peoples’ Social Forum.