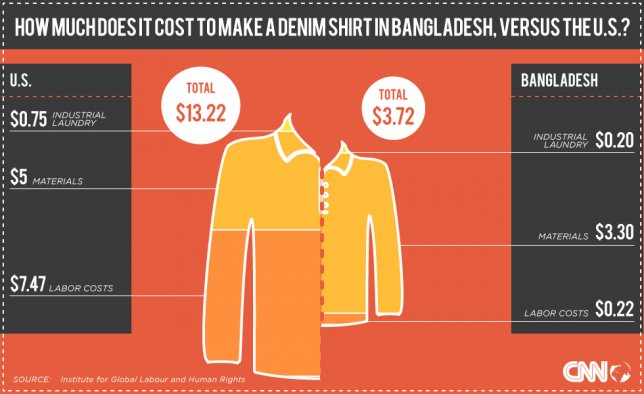 Avoiding Tragedy: A New Role of Corporate Involvement in the Aftermath of the Bangladesh Factory Collapse

The April 24 collapse of Bangladesh’s Rana Plaza factory took the lives of 1,127 individuals, and left more than 1000 injured. The tragedy gained significant international attention, shedding light on the global trade of clothing and the inequalities that exist within.

Unfortunately, occurrences such as this are not uncommon. In 2012, 260 people were killed in a factory fire in Pakistan, and later that year a factory fire in Bangladesh killed 112 people. Likewise, just weeks after the massive Rana Plaza collapse, Bangladesh witnessed another factory fire that killed at least 8 people.

The intricacies of the garment industry are entangled within a complex global system. Consumers in Western countries shop for the best price available, and as a result head to Wal-Mart to buy a pair of their $8 Faded Glory Jeans. One thing the consumer may not realize though, is that these $8 jeans are likely made by a factory worker, often in Bangladesh. The workers are required to produce this item every 6 minutes, for up to 12 hours straight. They are paid roughly 24 cents/hour, receive minimal social and health benefits, and work in hazardous working conditions.

A frequent response made by consumers is to boycott the clothes made in these countries. The garment industry in Bangladesh, however, is booming, as the country is the second largest clothing exporter in the world. The industry accounts for 80 percent of the yearly exports and brings in approximately $19 billion per year. Boycotting the industry will take the jobs away from the 4 million employees that work there, and leave the factory workers in even harsher conditions.

Wal-Mart and other large-scale multi national corporations that operate in foreign countries have a duty to ensure the safety of their employees. But when their single-minded goal is to increase profits and provide the most products at the cheapest cost, they conduct skeptical business practices. In order to maximize profits, they outsource their jobs for the cheaper costs of labor overseas and evade domestic taxes, which according to the Organization for Economic Development (OECD), has amounted to a total of $21 trillion lost to home countries.

The 2011 UN Guiding Principles of Business and Human Rights states that it is the duty of the state and the corporations to respect, protect and remedy the human rights of all stakeholders. When the Rana Plaza factory collapsed, Wal-Mart said that the building managers violated building codes and safety regulations. It is true that the Rana Plaza was built on unstable swampland and had multiple stories illegally added to the five-story building. It is the duty of states to ensure the safety of their buildings, but it is also essential that the corporations step up to their responsibility and prioritize the labor rights of all their employees. Recognition to this issue is underway, and on May 17, a five-year plan was introduced to improve the construction and safety of the buildings, provide independent inspections, and increase the financial role of corporations in these projects. In addition, the program prohibits companies to work in a factory that does not meet these obligations.

Thus far 10 European companies have signed on to the agreement, including big- name retailers such as H&M. However U.S. retailers such as Walmart and Gap refrain, indicating that they will create their own inspections. This is a major drawback to the success of the initiative. Large-scale U.S. companies could set an example for other companies and show solidarity in providing safe working environments for the overseas business operations.

While it is critical that these large-scale corporations step up and take accountability for the lives of their workers, some countries have mobilized and issued their own labor protection organizations. Sri Lanka, for example, created Garments Without Guilt that ensures the provision of the workers and mandates a higher income for the employees. Yes, it is slightly more expensive to produce in Sri Lanka but when the CEO of Walmart is making approximately $20.7 million/year, perhaps some of that money could be reallocated to the approximately $400 yearly wage that the Bangladesh workers receive.

It is unfortunate that a tragedy like the Rana Plaza collapse is what is needed to bring attention to the injustices existing in the garment industry. Hopefully future disasters can be avoided by holding corporations accountable to their duty to protect the human rights of all employees, at home and abroad, even if it means compromising their profits.