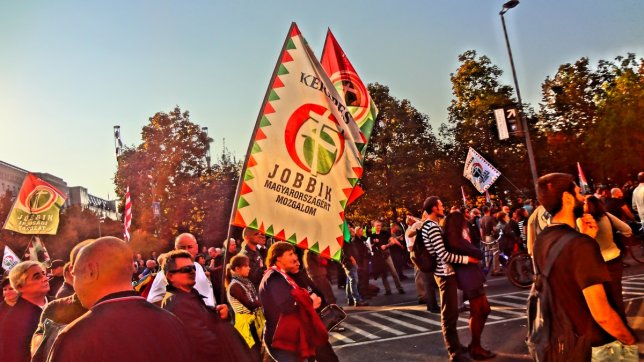 Neo-Fascism: The Beginning of a New Chapter in Europe’s History?

Scattered across seven years, seven cities, and seven professions, nine of the victims of the ‘Doener murders’ had one thing in common: a shared status as immigrants in Germany.

It took the German authorities what many consider to be a surprisingly long time to connect these politically motivated murders. The press, on the otherhand, were quick to connect the Turkish ethnicity of 8 of the victims as they named the murders after the popular Turkish Doener dish served at snack stands around Germany. The reasons for the tenth and final murder of a German policewoman are still under investigation.

Beate Zschaepe went on trial this month as the last living member of the neo-Nazi cell known as the National Socialist Underground, allegedly responsible for the murders. The case is bringing up recurrent issues in Germany that have been especially delicate and difficult to confront.

However, these issues of neo-Nazis and xenophobia are not unique to Germany.

Political scientist Francis Fukuyama considered Europe to be the continent closest to crossing the ‘End of History’ finish line: liberal democracy, he argued, was the conclusion of man’s political evolution. Fascism, then, could have been explained away as a small stumble on the path to utopia—except that extreme right-wing parties are currently seeing a revival again in many European countries.

Focusing primarily on issues of immigration, national identity, Euroscepticism and economic policy, these nationalist parties have recently gained an increase` in voters and support. Although in some cases, parties on the far right still remain on the peripherals, in others they represent a significant fraction of the electorate.

In Hungary, for example, 16.71 percent of the vote went to the far-right Jobbik Party in the April 2010 general elections, making it the third biggest party in the country. While party leader Gabor Vona’s ‘Hungarian Guard’ paramilitary fringe group was officially banned, it still works in practice as a voluntary civil service whose duties include patrolling against crime in Romani neighbourhoods and villages. Along with a firm antagonism towards Hungary’s Roma population, anti-Semitism is also one of the party’s defining factors. They have also said that if they held power, banning dual Israeli-Hungarian citizenship is something they would consider. Resisting global domination by Zionists is an openly acknowledged part of the party’s agenda.

Greece’s neo-Fascist Golden Dawn Party won just under 7 percent of the vote in May 2012. Despite its newcomer status to parliament, its associations with racism, Nazism and violence have created a media stir. The party banner is suspiciously reminiscent of the banner of the Nazi Party, though Golden Dawn claims it is an ancient Greek symbol. The Party denies allegations of violence, yet as the Greek economy continues to flounder, the party’s nationalist rhetoric and populist policies are winning it more support. Hearkening back to the glory days of Ancient Greece and linking National Socialism to Ancient Greek values, these strategies are having a soothing effect on voters who feel that Greece has fallen victim to unfair immigration and economic policies.

France is another example of a country having a far-right party gaining significant popularity. The Front National is now the third largest party in the country, and won 11 percent of the vote in the March 2011 local elections. Unsurprisingly, it also opposes immigration—particularly from Muslim countries that the party claims threaten French secular values. The Party’s leader, Marie Le Pen, is also opposed to dual citizenship. As for economic policy, the Front National calls for Protectionism and for France to leave the euro.

In Austria, the Freedom Party of Austria wants an end to immigration. With 25.8 percent of the vote in the 2010 Vienna elections and popularity that has only increased since then, this may be something they could one day achieve. The party is notorious for its low tolerance of Muslims: party leader Heinz-Christian Strache advocates a ban on building mosques in the country, and he sees the ethnically Austrian population as victims of ‘inverse racism’ from its immigrant Muslim communities. Like many of his fellow far-right counterparts, he also must constantly deny allegations that he is racist or a Nazi supporter.

The Italian Lega Nord Party accepts immigration, though only from Christian countries, so that the socially conservative values it supports can be upheld. The UK was already dealing with the British National Party—which up until recently required its members to be ethnically British—and the English Defence League’s anti-Islam demonstrations, when the UK Independence Party joined the far-right ranks with sudden electoral success in 2012 and 2013. The Sweden Democrats party won parliamentary representation in Sweden for the first time in 2010. It can now push to strip the country’s indigenous Sami population of their indigenous special rights status.

The list goes on, and the policies are similar. Not all the parties are associated with violence, and in cases such as Beate Zschape and the NSU, the violence came from what many consider to be a terrorist cell rather than a political group.

The EU is undeniably enduring difficult times, and many of these parties have seized their opportunity to gain power and popularity. The Golden Dawn tries to persuade people that the Greek financial crisis will be resolved once the immigrants are gone. In Hungary, the Jobbik party are seen by some as simply a fresh face in politics, who weren’t afraid to break taboos speaking out against the Roma and other delicate issues. But although it may be refreshing for disillusioned voters, bold rhetoric can quickly become dangerous.

According to these parties, they aren’t racist. They are Nationalist. They aren’t white supremacists, they are just want to preserve the traditional white ethnicity of their country. And their racist and often offensive comments are, according to them, taken out of context by the international media.

This week, the EU Commissioner of Home Affairs Cecilia Malmström gave a speech at the ‘We are the Others Conference’ in Berlin. “[Migrants] enrich our societies, and always have done. If we forget that, if we appeal to populism rather than engaging with the real issues when we discuss migration and integration, we risk fading into a very dangerous rhetoric,” she said.

The reality of Europe today is a multicultural society, unfortunately one that is economically struggling. But xenophobia and violence are unacceptable reactions to this reality, and they fail to address the real nature of Europe’s problems. The European Union is supposed to support human rights, respect and equality for those that live within it. Hopefully, these values of liberal democracy will continue to be upheld.