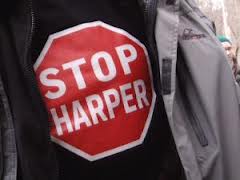 Is the Harper Government Going too far to Control Information?

In our digital era, in which the media is so ubiquitous and people are so connected, we tend to think that we are well informed. However, it appears that for the state, it is not very difficult to manipulate and control information.

Since the Harper government won its majority in 2011, it has been actively promoting its new agenda, trying to push forward its conservative ideology at home and abroad. Nowadays, Canadian values such as multiculturalism and tolerance appear to belong to the past.

The vision of Canada that has been promoted internationally is based on symbols such as the monarchy, and on military and economic power. On some issues, our views have changed significantly. For example, we now stand strongly with Israel, we are condemning, with disdain, international institutions such as the UN, and we are even preaching to European countries.

At home, this conservative vision is also pushed forward. The government has invested a lot of money to publicly promote its Economic Action Plan and the tar sands project in Alberta. Federal cultural funding is now mainly limited to the commemoration of the War of 1812 and celebration of the Queen’s jubilee. Scientists have been muzzled through departmental cuts and restructuring. Democracy has been endangered in the process: just recall the 2008 and 2009 Parliament prorogations and mammoth omnibus budget bills.

Thus, it appears that the control of information and the spread of disinformation have been main strategies used by the Conservative government to put forth its political agenda. It is worth looking more closely at some of these strategies.

First, the Economic Action Plan, which was designed – according to the Conservative’s message – to sustain Canada’s economic situation in a global economic context of crisis, has also been used as a political tool to diminish funding to specifically targeted departments. For instance, Environment Canada and the Canadian Environmental Assessment Strategy both suffered significant cuts in 2011. However, at the same time, the oil industry continues to receive more than one billion dollarsin tax benefits annually, which reaffirms the ideological vision underlying these cuts.

Justifying themselves by referring to the need for a government to communicate with Canadians, the Harper government’s last four years of Economic Action Plan ads cost the Finance Department over $25 million. Even if recent polls have shown that Canadians are getting bored with this public relations campaign, some calling this material “propaganda and a waste of money,” it is clear that it is not over yet.

The government has been using media publicity more extensively. Justin Trudeau’s recent victory in the Liberal Party of Canada’s leadership race has been an opportunity for the Conservative Party to launch ads against him to undermine his credibility and capacities. And the government is not only targeting Canadians, but also Americans. Selling our neighbors the idea of “responsible resource development” is a priority, in hopes to give Alberta’s oil producers privileged access to the giant American market. The government has put aside $16.5 million for advertising in the United States in 2013-2014.

Last, but not least, starting mid-May, Harper’s government has invested in publicities to promote a new program – the Canada Job Grant Program – that does not yet exist. The program is in development and, so far, has not been approved by the provinces. All this is getting ridiculous and costs are running high for Canadian taxpayers.

Additionally, Harper’s government has strongly denied any implication into the robocalls scandal during the last election, which apparently targeted non-conservative voters, giving them wrong directions to polling stations. The investigation conducted by Elections Canada gave birth to a proposition of a bill to reform political robocall rules and to fight “rampant procedural errors”. Then, in May 2013, Harper’s government announced its decision to cut 8 percent of Elections Canada’s budget and put the bill on hold at the House of Commons because of an unspecified problem. Opposition parties condemned the government and its vision of democracy. Liberal leader Trudeau even said: "For me it’s an indication that the Conservatives have understood that the less people turn out to vote, the better it is for them."

But, the straw that broke the camel’s back is Bill C-60. This bill will give the cabinet explicit power to give Crown Corporations orders on how to conduct collective bargaining. It is a very dangerous step, threatening, for example, CBC’s independence from the state. AsIan Morrison, spokesperson for CBC stated: “If this Bill becomes law, the government will have more lever to control what the CBC does, the programs it presents and the editorial content of the news. Our national public broadcaster will take one step closer to becoming a state broadcaster.”

However, despite of all this, recent polls surveying Canadians about their overall appreciation of this government have shown that 42% of them still approve it. So, the question that we should ask next is: Do they approve of it wittingly?

Information is always displayed with an ideological perspective, pushing forward an underlying discourse that aims to influence people’s thinking. On the other hand, Canadians have a right to access information, and plenty of alternative sources of information are available, especially in our technological era with social networks. So, to access analyses and critical thinking on a variety of subjects, coming from various perspectives should be easy in theory. However, some people do, many do not. Why is that? Perhaps, this flow of news and information creates the feeling that we are definitely informed about what is going on, preventing us from going further in our analysis. Moreover, the strength of the dominant discourse is that it is getting accepted as a truth, without being put into question. That might explain why this government is using such tools to influence Canadians. It can push forward an ideological revolution and redefine Canadian identity with its Conservative vision.

However, we should not forget that we have, as conscious citizens, powerful tools to diffuse and promote critical thinking about our leader’s priorities and decisions. Social media offers opportunities that we are just starting to discover. Part of the solution might lie on the integration of critical thinking and alternative discourses in this ongoing flow of information. Definitely, it is our responsibility to show our government that we are expecting more from it and that disinformation strategies are not a proper way of ruling a democratic state.