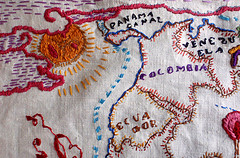 The US Arc of Instability

The New Great Game is not only focused on the face-off between the United States and its strategic competitors Russia and China, with Pipeline-istan as a defining element. The Full Spectrum Dominance doctrine instead requires the control of the Pentagon-coined “arc of instability” from the Horn of Africa to western China. The cover story is the former “global war on terror,” now "overseas contingency operations" under the management of President Barack Obama’s administration.

What Washington calls the "Western hemisphere" is a sub-section of the New Great Game. The linkage between the recent military coup in Honduras, the return of the living dead—that is, the resurrection of the US Navy’s Fourth Fleet in July 2008—and now the turbo-charging of seven US military bases in Colombia, is not to be blamed merely on continuity from President George W Bush to Obama. This is all about the internal logic of Full Spectrum Dominance.

Twelve South American nations, under the Union of South American Nations umbrella, got together in Bariloche, Argentina last week and after a heated seven-hour discussion only managed to stress, somewhat meekly, in reference to the US military presence in Colombia that, "foreign troops cannot be a threat to the region". At least President Lula da Silva of Brazil will be asking Obama to get together with South American presidents and reveal what this new military pact with Colombia is really all about.

It is instructive to examine how some of the sharpest South American minds view this. Uruguayan writer Eduardo Galeano (whose book, Open Veins of Latin America, was offered to Obama by Chavez at the recent Organization of American States summit) in an interview with an Ecuadorian paper, stressed how the US had spent a century fabricating military dictatorships in Latin America, so when there is a military coup, such as in Honduras, Washington is at a loss for words.

As for the military bases in Colombia, Galeano said they "offend not only Latin America’s collective dignity, but one’s intelligence.”

The US has already set up three military bases in Colombia, plus a dozen radar stations. Now this will be upgraded by the Colombian government to seven bases, one of them—Palanquero—with air access to the entire hemisphere. Seven bases in Colombia is a natural Pentagon response to the US losing the Manta base in Ecuador, and losing its grip on now leftist Paraguay. Washington already trains the Colombian armed forces, special forces and the national police.

Argentine political scientist Atilio Boron goes for the jugular. For him, "To think that those troops and weapons systems are based in Latin America for some reason other than to ensure the territorial and political control of a region that experts consider the richest on the planet in terms of its natural resources—water, energy, biodiversity, minerals agriculture, etc.—would be unforgivably stupid."

American political activist and author Noam Chomsky, in an interview to Venezuelan-American lawyer Eva Golinger during the former’s recent visit to Venezuela, explained how the "rose wave" of South American leftism is scaring Washington so much that it is forcing it to collaborate with every government that would have been summarily deposed a few decades ago. Chomsky refers to the Joao Goulart government in Brazil, which was toppled in 1964, giving way, under US supervision, to "the first national security state, neo-Nazi-style.” Lula’s policies today are not that different from Goulart’s.

Colombia has received over US$5 billion from the Pentagon since Plan Colombia was launched by President Bill Clinton way back in the year 2000. Colombian President Alvaro Uribe rules over a captivated land infested with paramilitaries and extra-judicial killings; scores of peasants and trade unionists have been killed in cold blood.

In a 1991 unclassified Pentagon intelligence report, then-senator Alvaro Uribe Velez is described as "dedicated to collaboration with the Medellin cartel at high government levels.” The report stresses Uribe "has worked for the Medellin cartel and is a close personal friend of Pablo Escobar Gaviria,” the archetypal, now dead, Colombian drug lord. No wonder Uribe has always fiercely fought any possible form of extradition treaty.

Boron describes Uribe as "the empire’s Trojan Horse.” It is this Trojan Horse that allows a counter-insurgency operation to be packaged as a "war on drugs.” Colombia remains the number one supplier of cocaine to the US, Plan Colombia or not.

The counter-insurgency is also in large part directed against Venezuela’s Chavez, who, in his innumerable casual moments, makes no secret that he "knows Uribe, and his psychology, very well.” Golinger, author of Bush vs Chavez: Washington’s War on Venezuela, told Russia Today that "Plan Colombia really does not have the objective of addressing directly the war on drugs," it is more about the "control of natural resources and strategic resources.”

Inevitably, that is where NATO comes in. The only part of the world where NATO is still not active is South America. That said, a few months ago the head of the Pentagon’s Southern Command, Admiral James Stavridis, became NATO supreme commander. Indeed, three of the past five NATO top military commanders— Stavridis, Bantz Craddock and Wesley Clark— moved to NATO from the Southern Command.

Little wonder then that Bolivian President Evo Morales said in Cuba, in mid-July, "I have first-hand information that the empire, through the US Southern Command, made the coup d’etat in Honduras." And all this while not only Mexico and Argentina, but also Brazil and Ecuador, are on their way to decriminalizing drugs.

War on drugs? So much for the cover story. More like the Pentagon, to paraphrase Galeano, insulting Latin America’s intelligence.

Pepe Escobar is the author of Globalistan: How the Globalized World is Dissolving into Liquid War (Nimble Books, 2007) and Red Zone Blues: a snapshot of Baghdad during the surge. His new book, just out, is Obama does Globalistan (Nimble Books, 2009). This Article was first published in Asia Times on September 3, 2009