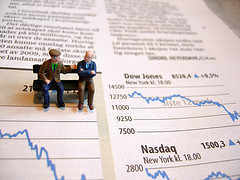 The Economic Crisis and Obama’s Response- Part 2 of 2

A Problem of Scale

The Obama administration’s bank bailout may work to save the major banking institutions. But there are two problems. One is that there is no reason why we should have, over the next several decades, all the big banks we now have. We don’t need, and won’t need, a banking system as large as we have had for the last couple of decades.

The banking system grew enormously in relation to the economy after around 1994 as a result of two credit bubbles: information technology and housing. It will shrink. It has to shrink. Going forward, we are not going to have – anyway we should not have — a banking sector paying ten percent of all wages and earning thirty percent of all profits, which was the case just a few years ago.

The issue, then, is which banks will shrink? Which will be squeezed out? Will it be the very large number of very small banks— which are more community-oriented, which were conservatively managed, and which generally avoided involvement in toxic mortgages and subprime securities, and which are solvent today? Or will it be a handful of large banks that were at the root of this disaster?

Some of the large banking institutions are too large to be managed even by their own leadership, let alone regulated by public authority. They are deeply complex international institutions designed to make money by tax and regulatory arbitrage – that is, a large part of their business is effectively legal tax evasion and regulatory avoidance.

The head of AIG— an insurance company, but the major issuer of credit default swaps and a firm at the heart of this crisis— wrote in the Washington Post that when he was installed last fall it became clear to him that the organization was too big to operate as a going concern. That is probably no less true of some of our biggest banks. And if you are too big to manage, you are also too big to regulate.

It is therefore ill-advised — the word that first came to mind was “insane”— to design a financial policy that is intended to preserve the biggest banks as they presently are, thereby forcing the adjustment onto everybody else.

The second problem with the bailout plan is its economic goal: “to restore the flow of credit.” Is that likely to succeed? The answer is that the argument— indeed the whole metaphor— is based on a misconception.

Credit is not a flow. It is not something that goes from high in the banking system down to the rest of us, the borrowers, at a rate governed by the amount of money that happens to be inside the banks. Banks are not moneylenders. They do not need money in order to lend. Credit is not a flow.

Credit is a contract. A contract is a bilateral relationship between a lender and a borrower. It is based, in part, upon the prospect of profitability. That is, it is based on the underlying condition of the economy and the optimism felt within the population for the economic future, and on the value of collateral, which is the security you can put up against a loan.

In this environment the prospects are exceedingly bleak and the collateral— namely the housing stock— has fallen so far in value that it probably will not support lending no matter what happens to the capitalization of the banks.

It therefore seems illusory to believe that the Treasury’s bailout plan— even if it were appropriately designed to create an effective restructuring of the financial system, which it wasn’t— would achieve the overlying economic purpose of restoring credit to economic activities that would generate new employment.

So, what should be done now?

It is imperative to tackle the problem head on and recognize that the government has to be larger than the largest commercial bank. It has to be capable of dealing with whatever problems the banking system throws at it. If that means banks need to be restructured, downsized, broken up, and sold, then that should happen as quickly as possible. The legal authority to do this largely exists and the practice of doing it is well-established.

In the savings and loan crisis under the late Reagan and George H. W. Bush Administrations scores of troubled or insolvent institutions were taken over by the Federal Home Loan Bank Board; their assets were evaluated in a penetrating and independent way by new management before they were handed off to the Resolution Trust Corporation and sold at an appropriate value. The institutions themselves either closed or kept operating in insolvency until economic conditions improved and they could be re-floated as viable, going concerns. This happened. It continues to happen today, as smaller failed banks are taken over by the Federal Deposit Insurance Corporation.

With respect to fiscal policy — public spending — and what the government does directly to support the economy, it is essential to recognize that what needs doing needs to be done for the long term. This is not going to be over within two years.

We need a range of new institutions capable of dealing with our economic dilemmas and our problems well into the future. For two or three decades, public infrastructure has been neglected; it is in deeply decrepit condition. The reconstruction of the country needs to be financed on an ongoing basis very much as Franklin Roosevelt did in the New Deal: something that can engage the energies and activities of the whole country for a long period of time.

This is of particular importance as we confront the problems of energy security and climate change. Energy security, because if we do not engineer ourselves to have economic expansion without increasing the demand for oil, we will become victims of increases in the oil price almost as soon as the recovery gets underway, and that will tend to forestall the realization of sustained growth over time. Climate change, because if we do not rebuild the country in such a way as to keep our total energy demands and greenhouse gas emissions down on a sustainable basis, the country itself will not be habitable in finite time.

On the bright side… maybe there is no bright side. But it may become reasonably clear that the first round of the Obama New Deal was not sufficient and we will have another round of debate over what should be done. This will be a very dangerous period because every snake oil salesman in the country will be out claming that their own remedy was the right one in the first place. But we will, at least, have a chance to revisit the issues of renewable energy and protection of the environment. These two areas, it seems to me, are the most important and with persistence there is at least some hope that eventually the sensible — which is to say ambitious — program might prevail.

James K. Galbraith is Chair of the Board of Economists for Peace and Security, and author of The Predator State: How Conservatives Abandoned the Free Market and Why Liberals Should Too (Free Press, 2008). This text is based upon a Galbraith lecture at Clark University, Worcester, Massachusetts. The entire lecture (AIJ’s two-part series is covering but a fraction) is forthcoming in the journal Human Geography, Volume 2, Number 2, 2009.