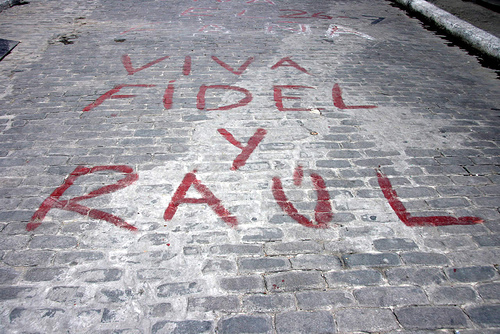 The Search for a Socialist Smartphone

It may take several more years before the average citizen of Cuba, a self-proclaimed socialist country, faces consumer decisions as critical as choosing between a BlackBerry and an iPhone. If Cuba is truly a socialist example, then how is it possible for its citizens to ever practice the capitalist power to choose between two different loaves of bread, let alone two different smartphones.

At the heart of this question, as well as many (if not all) other issues of economic insecurity surrounding the small Caribbean island, lies the Cuban contradiction; socialism. After years of uncertainty and unfaithfulness, Cuba’s relationship with socialism is drawing to an end. The divorce claim has been laid, but why is it only now that the unmet needs of the Cuban people are surfacing? Equally important, what is it that Cubans desire? The needs of the average Cuban today can be labelled simply as things. By things, do we mean an education system which grants Cuba the world’s second-highest literacy rate? Surprisingly, no. Perhaps, then, Cubans desire a health care system that is comparable to that of OECD nations? Not quite…it seems that universal health care, too, does not justify the survival of Cuban socialism. First, we must looks at certain imperfections of Cuban socialism. Yes, one does not have to wait very long at the hospital if they contract the flu. But this, as well as other misleading statements about Cuba, must be viewed through an incriminating lens which reveals, for example, that it is virtually impossible for the average Cuban to find household products such as Tylenol at the store. At least Cubans live in a society where hard work in school affords even those of modest background the opportunity to pursue a career in law, or medicine…right? This, too, may be misleading, directing us to the contradiction found in Cuba’s dual economy.

Cuba’s first economy saw the birth of the peso, the currency with which 90% of public sector workers continue to be paid, and consequently use to purchase the few food rations available in stores. Since 1993, there exists the dollar economy, which allows those fortunate enough to have access to American dollars the ability to buy and receive goods such as designer clothing and cell phones from family members working abroad. American dollars can be acquired through these remittances from abroad or, increasingly, through tourism. Either way, it is not uncommon to find Cubans with law degrees working as bartenders at tourist resorts, or migrating overseas in search of higher incomes. The dual economy is not characteristic of the socialism originally prescribed by Fidel Castro. For most Cubans, socialism is no longer alive. The problem, however, is that neither is capitalism. In search of further explanations regarding Cubans’ growing disenchantment with the government’s provision of otherwise very desirable basic necessities, it is useful to take a historical perspective. It suffices to say that half a century later, Cuban children, teenagers, and even middle-aged men and women, are no longer ingrained with the harsh realities of life under Fulgencio Batista, whose dictatorial rule preceded that of Fidel Castro. After Castro’s initial attempt to start a revolution in Cuba failed in 1953, he formulated his famous speech, “History Will Absolve Me,” wherein he outlines the human face of the socialist revolution, promising things like employment, food, housing, and electricity. Surprisingly, smart phones were not once mentioned in the speech. What we can conclude, here, is that the modern-day Cuban is preoccupied with different things than the Cuban for whom Castro spoke in 1953, as a remedy vis-à-vis the viral rule of Batista.

Now, more than at any moment during the last half-century, the opportunity for a capitalist transition is ripe in Cuba. Unlike the Soviet satellite states of Eastern Europe where the market-oriented reforms were greeted openly, older Cubans tend to have a softer spot for Fidel Castro’s socialist ideology than, say, the Poles did for Vladimir Ilyich Lenin. This is understandable since the repressed Eastern Europeans were not nearly as eager as their Cuban counterparts (some of whom took up arms against the United States in 1961 during the Bay of Pigs invasion) to defend the name of the revolution. However, as the familiar faces of socialism grow old, the visibility of the revolution is dying. The generation of revolutionaries, the same ones who helped sustain the glorious Cuban Revolution, are now in their seventies. It is for this group of elderly revolutionary sympathizers, that the pragmatic changes implemented by Fidel’s brother, Raúl, will be viewed as the most disgraceful. Although unfortunately for them, Raúl acknowledged the need for change in the Communist Party’s Congress, held in April for the first time in fourteen years. Congressmen decided to allow the sale of Cuban real estate, indicating the regime’s transition towards a market-oriented economy.

This is the type of change the younger Cuban generation desires. This generation wants Facebook. They want smartphones. Interestingly, they also stand against the ideals of perfect equality decreed by Fidel Castro’s Revolution. It appears that Cubans have grown tired of being equally poor, and are more than willing to compromise the holy name of socialism in hopes of obtaining goods which, even as of a couple years ago, was unthinkable. Socialism is dead, but when will capitalism be born in Cuba?