Land is the resource upon which many Rwandans rely for their livelihood. The stakeholders in modern day agriculture are numerous. Farmers, co-operatives, NGOs, corporations and governments all interact to create a complex and dynamic sector that is vital to the social, political and in particular economic aspects of the country. This photo essay explores how land use change and new agricultural practices are changing the landscape of Rwanda. 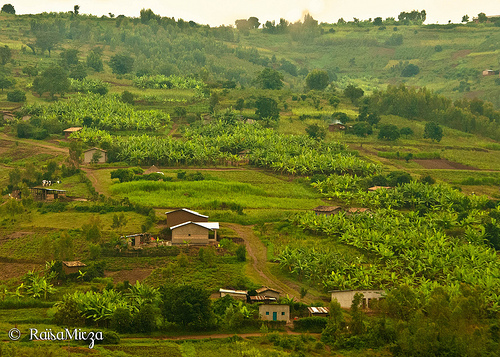 Rwanda is not called the "Land of a Thousand Hills" for naught. The entire countryside is dominated by undulating hills from the borders of the Democratic Republic of the Congo on one side to Tanzania on the other. They are more than just a characteristic of geography; even communities are organized by hills, with people identifying themselves as being from one "colline" or another.

The steep sides of these hills are the only place that farmers, who constitute almost 80% of the population, can cultivate land and raise livestock. Terracing is extremely expensive and time consuming so it is not a common agricultural practice. Instead, families plant their plots on the slopes and have adapted the crops to the terrain. 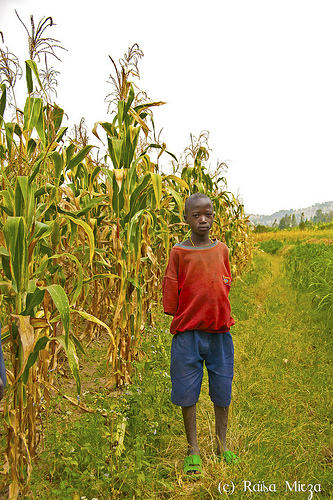 An increasing population is putting pressure on Rwanda’s farmers to increase yields within the same land size. Entire valleys where rivers once flowed are drained and converted into fields where maize is grown by local community organizations. In most cases, government incentives such as free high yield seed varieties and access to fertilizers are used to convince farmers to switch from traditional crops to maize production.

This maize field sits atop an area that used to be a river. Farmers complain that it floods during the rainy season. They need more help to build irrigation canals to channel the water away from the area. 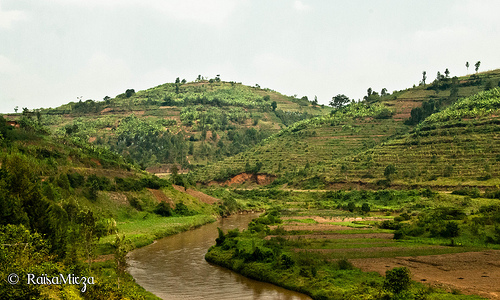 Down In The Valley

What is the impact of converting riverbeds into cropland for the environment? Many agronomists agree that life is better with more room to plant food. However there have been no environmental assessments of land use change. Only one farmer admitted that there were now fewer species of birds than before. 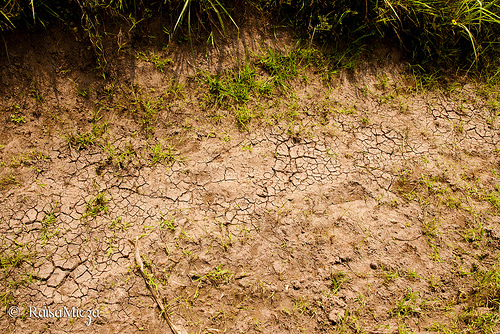 Diverting and changing the course of an entire hydrological system result in serious environmental consequences over the short and long term. This is the bottom of a former riverbed. The water was diverted to make the bed suitable for growing crops. Dry land replaced what used to be a river and wetland environment. 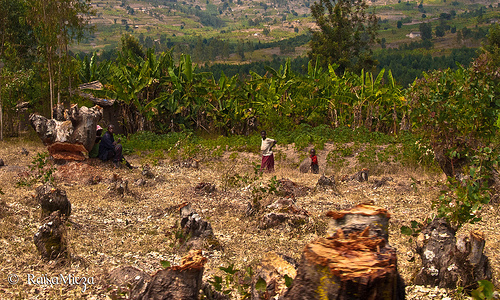 Off with the trees!

Large trees are a rare sight in Rwanda. This family cleared the trees in their lot to enlarge their agricultural land. Deforestation on hills leads to the rapid soil erosion of the nutritious upper layer of soil. When trees are cut down, the roots that used to hold the topsoil together often collapse. Landslides are possible in steeper hill areas, destroying crops and houses on the way. 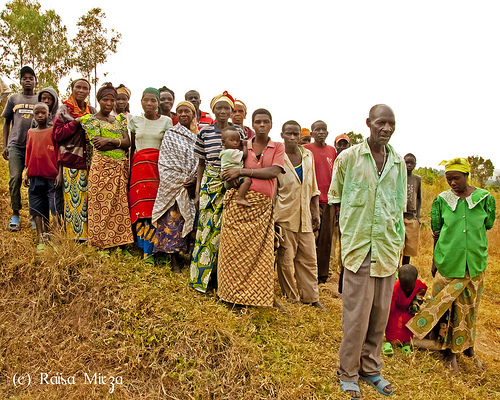 Many farmers are part of agricultural associations or co-operatives. As a group, they have better access to inputs and fertilizers and have increased access to credit. Small social groups like this are a huge part of the Rwandan rural experience. 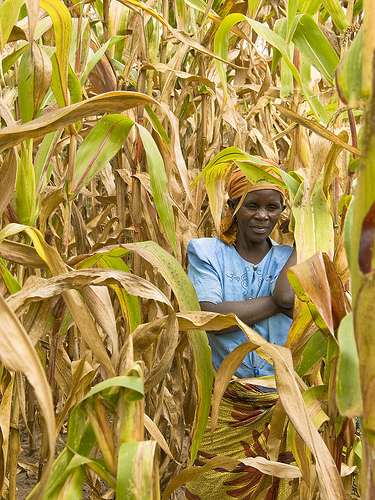 Many of the farmers in Rwanda are women. Some are members of more than one association or co-operative which enables the cultivation of larger areas of land in addition to smaller family plots. Local NGOs offer training workshops on modern farming techniques to farmers’ groups. Agronomists follow-up with farmers throughout the season to ensure the proper tending of crops. This woman is attending a maize harvesting workshop. 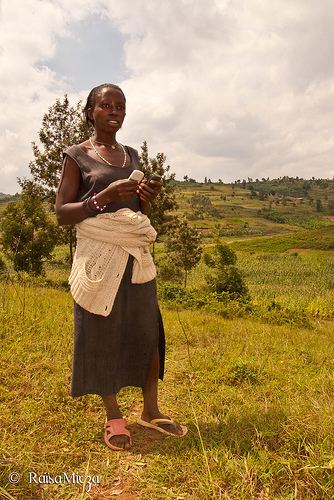 This is a typical Rwandan farmer. She is a woman, she lives in a rural area, she is a member of a couple of different associations. She uses cell phones to communicate with others in her group. As a group leader, she calls meeting and is the primary contact between visiting agronomists and those of her collective. She is a hard worker and is hopeful about the future of her country and of her children. 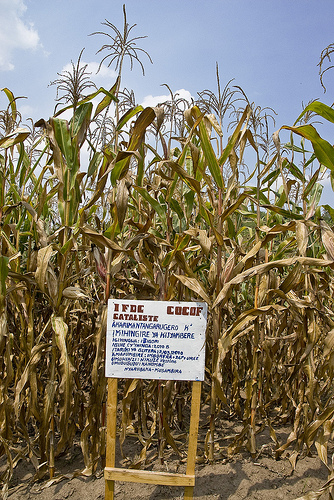 In an effort to teach modern agricultural techniques to farmers, various NGOs have funded demonstration fields where farming co-operatives can come to watch and learn. This demonstration field was divided into two – one side used traditional methods of preparing the soil, planting and no pesticides. The other side used high yield maize seeds, chemical fertilizers and inputs and a deliberate spacing method to ensure optimal growth. 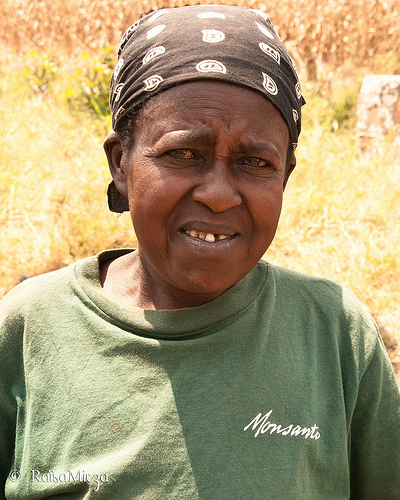 With the increase of farming maize in Rwanda, large agricultural conglomerates such as Monsanto have a larger stake at supplying the government with high- yield maize varieties to grow, fertilizers and chemicals. However, soil degradation and traditional growing methods are being put aside for techniques that might affect the population badly in the near future. 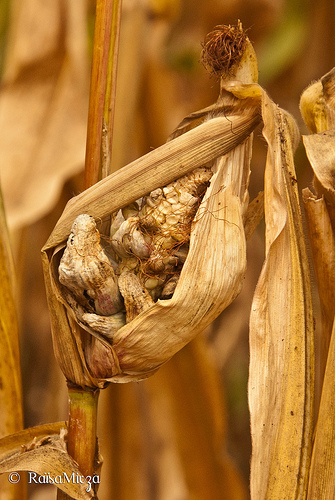 Diseases and pests are problems for farmers everywhere. For small holder farmers in developing countries, they represent a significant loss of income that can lead to food insecurity and malnutrition in affected regions. The Rwandan government promotes a select few varieties of maize through their agricultural programs. This makes crops more susceptible to the stress whereas a greater genetic variation in crops would allow for increased resilience against pests and disease.

As more and more farmers are encouraged to switch from producing traditional vegetables for subsistence towards harvesting maize for sale, the onset of disease or pests in a crop can seriously harm a family’s productivity. To prevent such problems, fertilizers and pesticides are made more widely available to farmers at lower prices. However, over time, the pests and diseases will adapt to these agricultural inputs which will increase the demand for stronger products and further harm the environment (for example, by contaminating water, already a scarce resource in Rwanda as a result of climate change). 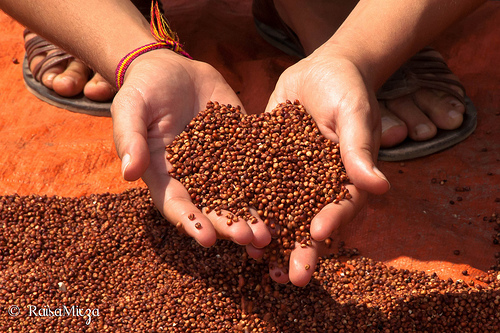 Sorghum, a traditional crop, is usually ground up and mixed with milk or water for a kind of porridge. Its nutritional content is very poor therefore the government discourages the practice of planting entire fields of sorghum. 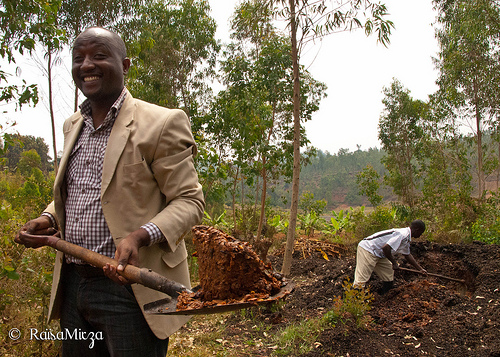 Jean Paul is a professor of agronomy at the University of Butare. His team, with help from Texas A&M University has been at the forefront of the fair trade and organic coffee growing movement in Rwanda. Here, he shows how coffee husks are composted. The compost will be redistributed throughout the soils of the coffee plantations to increase nutrients in the soil. 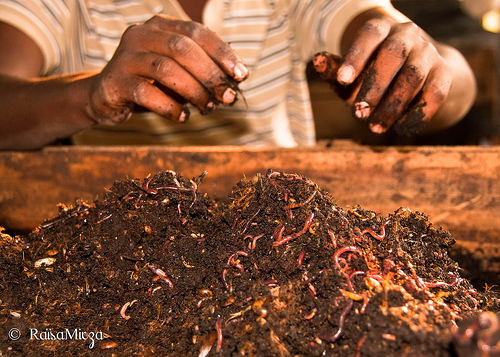 Vermicomposting is also being experimented as a way to increase soil fertility and to reduce the amount of waste from coffee growing. 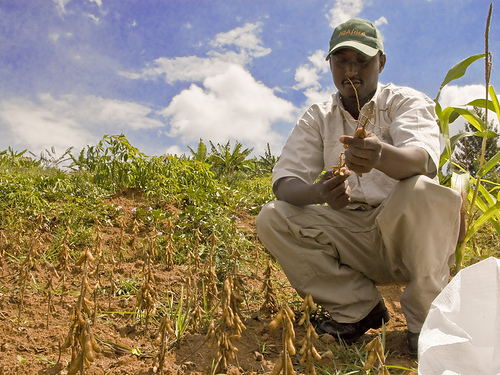 Felix is an agronomist for CIAT (International Centre for Tropical Agriculture). In partnership with the Bill and Melinda Gates Foundation and agricultural organizations across Sub-Saharan Africa, CIAT has launched N2Africa.The project promotes the use of nitrogen fixating legumes as a way to increase nutrients in degraded soils. In Rwanda, soybeans are a crop that contributes to the fertility of soils. They grow prosper in arid conditions and on hills. Soybeans are also an alternative to meat products. Traditionally, cows are very important in Rwandan culture, however they require large amounts of food and space to graze. Soybeans provide similar nutrients to cows and are a cheaper substitute. 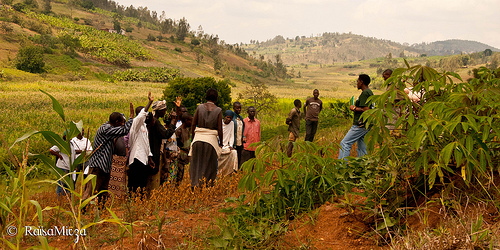 In the N2Africa program, agronomists visit test sites a few times during the season to talk with farmers. Farmers in this agricultural association visited trial plots with different fertilizer inputs and voted on which characteristics they found most important. Most farmers do not consider the size of the soybean to be the most important factor in the genetic variety. They also need the plant itself to produce leaves and biomass to feed their livestock. The conclusion of the workshop would not have been possible without the exchange of scientific and local knowledge. 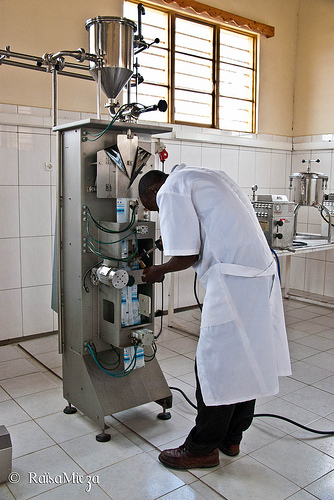 Encouraging using soy as an alternative to raising cattle means showing women the potential of soy as a food product. The local women’s association raised money to buy a soy milk packaging machine. Soy milk lasts longer and has fewer hormones than cow milk. However, the association used up most of its budget provided by NGOs on the machine. Less than a month after the purchase, the Rwandan government banned the use of plastic bags which made the sale of soy milk in plastic bags illegal. The women are now stuck with a very expensive machine they cannot use. 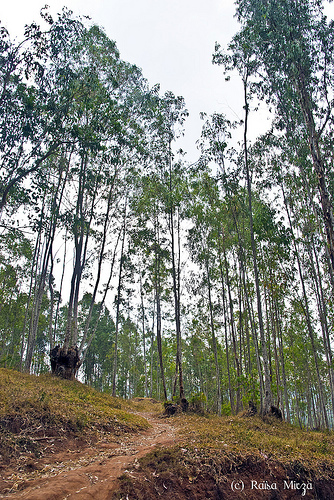 Eucalyptus forests are a common sight in Rwanda. Native vegetation has been cleared away to make room for fast-growing eucalyptus trees imported from Australia and China that can also be used as firewood. The majority of rural households in Rwanda use firewood for fuel. 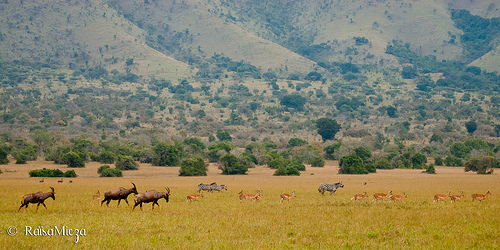 Rwanda has three National Parks and Reserves. Akagera National Park in the Eastern part of the country is shared with Tanzania. The park is under immense population pressures which decreases the amount of protected land occupied animals. The park was created in the late nineties but large portions of it were given to returning Rwandans for farming. Although it is illegal to kill any of the animals of the park, some still poach animals to eat. The biggest problem of farm encroachment is that animals often trample crops that are situated on the periphery of the park.

Tourism is a burgeoning industry in Rwanda. Tourists have to pay a very large sum of money to enter any national park (and they do!). Therefore, the government is encouraging education programs and tourism as an alternative livelihood for farmers in the region.