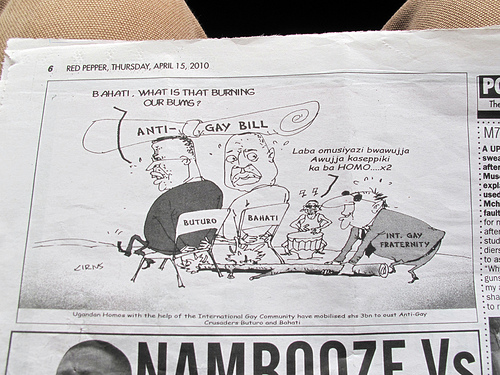 Uganda’s Anti-Homosexuality Bill came to life in 2009. Since then, campaigns for the passage of the bill and against homosexuality have occurred throughout Uganda as have protests against the bill. Throughout the lifespan of the bill, many responding events have occurred at a local and international level.

Earlier this year, four men killed Ugandan activist David Kato, his murder is widely seen as being due to his sexual orientation. In contrast to such hatred and aggression, this February Ugandan activist Kasha Jacqueline Nabagesera received a Martin Ennals Laureate for her work on behalf of LGTB communities in Uganda.

On May 13 the bill was shelved by the Ugandan parliament due to a lack of time to review it properly. The reaction to the shelving of the bill was mixed. Some feel that the continued existence of the bill is cause for concern rather than celebration, while others expressed that it was a victory that the bill was not passed by the current Parliament. The announcement to shelve the bill, victory or not, came days before the International Day Against Homophobia (IDAHO) on May 17.

At a time when the Anti-Homosexuality Bill is creating a stir throughout the world and directing international attention to Uganda and the prevalence of homophobia, the conditions of LGTB communities of other African countries are also brought under examination due to either geographic proximity or presumed similarity to Uganda. The examination of LGTB communities in a variety of African countries, with respect to the unique dimensions of the successes or challenges, is necessary for obtaining a non-monolithic understanding of LGTB peoples in Africa and avoid generalizations based upon headlining issues such as the Ugandan Anti-Homosexuality Bill.

When speaking with people working in organizations that provide support services and advocacy for LGTB communities in three different African countries, the impact of Uganda’s legislation was varied. Speaking to country-specific circumstances each community worker addressed the conditions that rendered their immediate national contexts particular.

The Impact of the Anti-Homosexuality Bill

In Zambia, Chan Mubanga, human rights defender and director of the organization Friends of Rainka (FoR), affirmed that the Ugandan bill did have an impact on Zambian LGTB communities.

“There is more hatred now in our country from our politicians. Now they are basically parroting what is happening in other countries and bringing it here even without analyzing it [and] its impact on the people of this country,” said Mubanga pointing to last year’s attempts to introduce legislation that banned marriage between two same-sex partners. This legislation was thrown out of the Zambian Parliament early this year. “There’s a lot of mimicking going on just between governments,” Mubanga said. “That’s a trend in Africa right now; in our country especially.” Mubanga explained how Zambia’s upcoming elections have contributed to homophobia due to campaign tactics such as the opposing party’s president being accused of promoting homosexuality. Programs Director for FoR, Lundu Mazoka, elaborated on the political manipulation of sexual orientation. “Zambian politicians, like most African ones have a tendency to look for scapegoats, socially and religiously contentious issues such as homosexuality draws attention away from their corrupt acts and infidelities,” he said.

“They’re trying to win elections once they go to the polls. They believe, it’s a Christian nation; it’s morally wrong what we [groups like FoR] are trying to advance in this country. They’ve accused politicians of using human rights as an angle to promote what they term as ‘animal behaviour,’” Mubanga said describing the strategy behind political manipulation of homosexuality.

Gift Trapence, director of the human rights organization Centre for the Development of People (CEDEP) that works closely with minority groups in Malawi, noted a similar trend of politicized sexual orientation. When Trapence discussed homophobia, the term acquires meaning based not only on discrimination and stigma potentially attached to sexual orientation, but also on the Malawian political context. Pointing to critical issues in Malawi such as freedom of the media, low wages, and spies’ presence in classrooms, Trapence stated that all these issues are brushed aside by politicians preferring to address the “gay issue.”

Executive director of Alternatives-Cameroun Yves Yomb noted the trend within governmental systems as well. He highlighted how in Cameroon’s 2011-2015 strategic health plan to fight AIDS, males who have sex with males (MSM) were included in the plan, however, at the same time, he observed existing laws regarding homosexuality beginning to harden with harsher penalties being applied.

International involvement in Africa regarding homosexuality has also had a large impact. Yomb said that the European Union’s involvement in funding the fight against homophobia in Cameroon has provoked more homophobia than he had thought existed as well as bringing up charges of neo-colonialism and imposition of Western will. He referred to Senegal as experiencing a similar situation.

In Malawi, foreign aid is being withheld due to the government’s homophobic and discriminatory practices based on sexual orientation. This stance has shown the intention of international solidarity for LGTB communities while also provoking a homophobic backlash against LGTB communities in Malawi.

Within Zambia, Mazoka explained that many politicians view homosexuality as a Western construct, thereby politicizing sexual orientation with many additional issues inherently linked to sexuality, such as national or African identity among others.

Religious Groups and Sexual Orientation Trapence admits the possible influence that Uganda’s legislation could have on the power dynamics of Malawi’s laws that criminalize same-sex marriage, in particular considering the homophobia Trapence attributes to religious groups within Uganda.

“Maybe that’s also why we, in Malawi, are very aware of religious groups that are very homophobic. We are also learning from their opposition in Uganda. There’s that influence at the political level in Africa where we will learn from each other in responding to these issues,” Trapence said.

In Cameroon, Yomb outlined Alternatives’ goals to continue advocating authorities for abolishing the penalties of Article 347 Bis and educating the public about homosexuality. Acting on these goals, Alternatives-Cameroun held a series of activities for IDAHO including a debate entitled To be Christian and homosexual: Is it possible?

“We don’t want to give room for the media or other religious authorities who are the origin of the wave of homophobia in Cameroon at the moment,” Yomb said.

“Most of the media reports demonize homosexuality. They say it’s ungodly, it’s un-African, all those things. They use religion and culture to go against any other sexual orientation other than what is perceived as normal,” said Mubanga regarding the image of homosexuality in Zambian media.

With 2011 being an election year in Zambia, homophobic discourse in the media and in politics has increased. “The political environment has become a little too threatening for the safety of community members,” Mazoka explained.

Mubanga spoke of daily media reports lambasting homosexuality. While Mazoka described three of Zambia’s largest daily newspapers, the Times of Zambia, the Daily Mail and the Post – only the Post is not state-owned – frequently giving a voice to anti-homosexuality sentiments.

“[There] have been nothing but derogatory remarks from politicians, and the media have been very biased,” said Mazoka. “In the recent deliberations on the amendments to the current constitution, Southern Province Minister Daniel Munkombwe said homosexuals are worse than dogs, this was during the debate on the age of consent to marriage.”

“With homophobia going around, I think people actually are afraid to come out,” Trapence said. He noted the difficulty in reaching out to LGTB communities regarding HIV-AIDS prevention as a result of this fear, prevalent homophobia in the media and the atmosphere created by Malawi’s laws. Some of Malawi’s laws include being imprisoned for proven or suspected homosexuality, and the most recent law criminalizes lesbian relationships. Embedded Discrimination and Stigma Yomb explained the current state of legislation concerning sexual orientation in Cameroon.

“Article 3467 Bis of the penal code is a law that punishes homosexuality. LGTB people are arrested and imprisoned not because they are in flagrant violation of the article but just because of slander, accusations, or because you are different from others, you can find yourself in prison for homosexuality.” In Zambia, trans people are often victims of mistreatment by homophobic doctors and personnel throughout the health care system simply due to their visibility. Mubanga explained that whenever a group of over ten perceived LGTB people gather for any reason, FoR is required to inform the police. “Basically it’s just monitoring and knowing exactly what’s happening at that party or at that event,” he added.

With political and systemic obstacles fueling homophobic sentiments, organizing an event such as IDAHO was not possible in Zambia. Though FoR has partnerships with different national, African and international organizations, LGTB communities face challenges on the ground which can limit activism. With the 59.3% of Zambians living below the national poverty line, according to 2006 World Development Indicators, making ends meet demands the time and energy of many people. Facing economic struggles, most people, according to Mazoka, tend to look the other way and mind their own business rendering inter-country solidarity “non-existent.” “Everyday living is lived underground. People are not openly gay,” Mubanga explained. He describes the oppression they face and the consequences he has seen as a result. “People are not able to be who they are and it is at times almost traumatic because most people are getting into alcohol abuse, drug abuse, [and] risky sexual behaviour just to be able to cope with oppression.”

The Future Mazoka and Mubanga see raised awareness and widespread education as the sole solutions to the prevalent discrimination and stigma based on sexual orientation in Zambia. “Any kind of phobia is all about fear of the unknown, so once you make it known, I believe that people will be able to just move past the hatred and be more tolerant,” said Mubanga.

“Most of the homophobia experienced in Zambia is mainly from a point of ignorance about the community,” said Mazoka who explained that FoR has been encouraging its members to engage in advocacy through one-on-one discussions. Mubanga said he expected to see a change over the next five years with the coming-of-age of a younger generation that appears to be more open minded and accepting of different lifestyles.

In Malawi, Trapence spoke of his expectations for change. “Things don’t just change in one day. It will take time for people to change their attitude or for government to change their laws. It’s a process; it’s a struggle but I hope we are moving in the right direction for talking about the issue in the community and [that] the community is able to talk about the issue.” Yomb, who described Cameroon as not shining as brightly as other African countries regarding the quality of life for LGTB communities, spoke to changes he already has observed. “It is true that the successes are not numerous, nevertheless the question of homosexuality which was taboo for several years is beginning to be the subject of conversations. The simple fact that we are already talking about it right now is a success.”