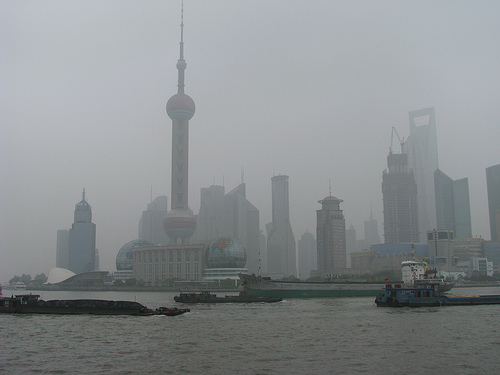 A rapidly industrializing nation, the Peoples Republic of China is simultaneously lagging and leading in the field of environmental health, which specifically addresses the physical, chemical, and biological factors impacting human health.

Environmental risk factors are much greater in China than in other industrialized powerhouses, and include risks associated with undeveloped rural areas and subsistence agriculture. In these areas, poor sanitation and lack of access to drinking water have caused the spread of a spectrum of diseases. Health risk factors in China also include soil, air, and food pollution from rapid industrialization, as well as post-industrialist epidemics such as obesity and hypertension. In order to adequately address, or at least mitigate the exponentially increasing problems, the Chinese division of the World Health Organization (WHO) has spent the past decade attempting to fuse environmental policy and health policy; two areas which have traditionally been managed separately within the Chinese administration.

The 2006-2010 Five-year Plan and the 2007 China National Environment and Health Act have finally shown progress in the merger of the two formerly disjointed sectors of government, environment and health. However, the availability of strategies to deal with environmental health remains fragmented at best, and not only in China. Bret Powis, a WHO Programme Coordinator, commented on the issue, stating that the lynch pin to progressive strides in environmental health is good governance.

There cannot be significant improvements if the infrastructure of the Chinese government is not conducive to the development of environmental policy. Thus, increased environmental health in China is dependent on changes in the fundamental constructs of the public sector.

Powis also noted that he found it easier to work with the Chinese government than other governments. He claimed he was very hopeful about future progression of environmental health policy, mainly because he felt that achieving long-term policy directives was much easier in communist systems. While this may at first seem surprising, it makes sense; a communist government does not drastically change over time. It is easier to coordinate with a constant agenda, rather than with changing agendas that waver depending on a political atmosphere.

In China, WHO focuses on two major strategies towards engendering the governance needed to effectively facilitate environmental health policy. As the Chinese department of WHO describes it, the first element involves “promoting the cooperation and collaboration amongst intergovernmental departments” and the second involves “identifying a clear division of responsibility among involved departments.”

While the objectives are admirable, their implementation seems questionable due to the ultimate priorities of the government. The Chinese government will always follow policy that allows it to retain absolute power within China and economic power outside of China. Among countless examples of this lies the fact that the Chinese government spends a far greater share of its budget on internal security than on national defence. Long-term dominance in environmental health policy will prove substantially beneficial for China, as it will not only make it a leader in the field of environmental sustainability, but will also legitimize its rapid industrialization by fostering moral gravitas. Yet at what point will that policy become beneficial for the Chinese government? Until this time comes, the lofty goals of the WHO will not come to fruition.

It is important to note that some components of environmental health policy progression in China are definitely more beneficial to the government now, and therefore will become realized sooner. For example, effective use of information and sustainable development are two environmental health objectives that the Chinese government has focused on improving for the sake of honing in on equity and environmental justice. The country quite obviously has an extensive record of human rights violations. How can there be social justice in a country of malleable civil liberties, dictated by the government on a whim? Justice seems especially foreign when considering the fact that anyone who attempts to challenge the Chinese government mysteriously enters a veil of inexistence. The case and point being jailed Nobel Peace Prize Laureate Liu Xiaobo.

A prime example of China’s effective use and transfer of information is the China Climate Change Partnership Framework of 2008, which has just recently been finalized, and is entering stages of implementation. This framework is a joint programme with the Spanish government, which is committed to funding global efforts to combat climate change. China has been one of the first nations to benefit from the Spanish commitment. Mao Jixiang, the Environmental Health WHO Programme Officer, commented on the progress of this framework with great enthusiasm, and was excited by the fact that that this soon three-year joint venture is finally moving past the technicalities which previously hindered its execution.

The point of this venture is mainly to transfer the knowledge and skills necessary for environmental risk management among Chinese agencies, with a focus on the health sector. Of note is that nowhere in the joint venture are there specific datelines or targets. There are essentially only suggested deadlines which means the Chinese government can make policies as it sees fit. Meanwhile, the rest of the world must watch and hope for some kind of evolution in the Chinese environmental health policy.

The People’s Republic of China is certainly a powerhouse nation. China will not easily bend to international pressure of any kind. Ultimately, the best way to make China enact environmental health policy, or any other type of policy that is beneficial to nations outside of China, is to convince the Chinese government that such a policy is also the best option for China. The WHO has been greatly instrumental in establishing and presenting such strategies, which have the capacity to strengthen China’s economy and global clout while modifying the environment in the country to encourage better health for its citizens.