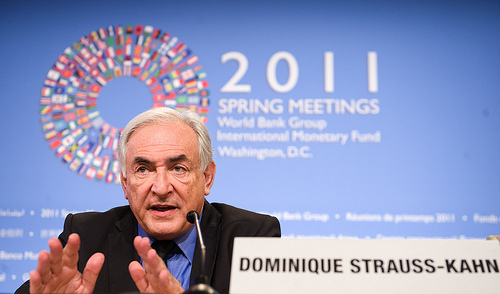 Structural Adjustment at the IMF. Literally.

The International Monetary Fund (IMF) is an organization of 187 member countries. The purpose of the fund is to promote the macroeconomic stability of the world economy by lending resources to countries that require assistance in maintaining the viability of their balance of payments. Ultimately, its goal is to oil the wheels of neoliberal economic growth worldwide.

In early May, the Managing Director of the IMF, Dominique Strauss-Khan, was accused of sexually assaulting a maid in a New York hotel. Whether the allegations are true or not, DSK (as he is known by his countrymen in France) was arrested, jailed and will be put on trial in the United States. The scandal attracted the attention of the media for days. DSK resigned from his post at the IMF as he did not wish to tarnish the public image of the fund at the expense of his personal escapades.

Unfortunately for him, the amount of press surrounding the case has brought the IMF into mainstream discussion. While Twitter went wild over the location of his temporary residences in Manhattan (see #DSK), the discussion in more intellectual circles surrounded the structure of the IMF itself.

Since its inception in 1944, the position of Managing Director at the IMF has been held by a European. The next director will be nominated in the coming weeks to fill the void left by DSK. While the tradition of appointing a European to the post may repeat itself for the eighth time, perhaps it is an opportunity for the developing world to shake things up.

In other words, the fund can choose, for once, a Managing Director from the global South. Experts from the North might doubt that there are candidates in the global South whose track records show the strength to wield the double-edged sword that is the IMF. But in this day and age, is the North-South divide really a good measure of competence? The economic downturn of 2008 hit the entire international system, and it seems that thus far, emerging and developing nations have recovered remarkably, whereas some developed countries (Greece, Portugal and Ireland) are fishing for bailouts. Many critics of the IMF are calling for the appointment of the next Managing Director to be based on merit rather than nationality or skin colour.

With all this in mind, imagine the perspective of someone with the wisdom we all long to possess. Perhaps in this mature state of mind the following eloquent conclusion would be reached: the only way for the global South to escape the clutches of the international system is to demolish the institutional architecture of the IMF and rebuild it in a world where each nation is a keystone. Now, evidently an architectural structure cannot have 187 keystones, but you get the idea; each member is as important and vulnerable as the next.

The way to really bring change to the international system is to have a substantial representation of countries from the global South on the Executive Board, which is the strongest decision making body at the IMF. The board is chaired by the Managing Director, but the real power lies in the hands of the twenty-four executive directors who represent the 187 members of the fund. It is currently made up of nine directors representing the developing world compared to fifteen representing the comparatively smaller developed world. Moreover, the majority of the hundreds of economists employed at the IMF, who are criticized for setting booby traps for developing countries (in other words, creating loan programs), have been trained as neoliberal economists in the schools of Western Europe and North America. Rather than filling the post of Managing Director, the developing world should try its hand at structurally adjusting the IMF by infiltrating the Executive Board with more developing world representatives and economists. Only then would the voice of the global South have a chance in the international system.

Take a look at the articles in this month’s Alternatives International Journal for an idea of the stories that have been overshadowed by the DSK scandal.

Contributing: The AIJ is a volunteer-based not-for-profit publication, which remains open to new contributors and participants. To submit an article or photos for publication, participate on the editorial team, or otherwise get involved, email aij@alterinter.org.