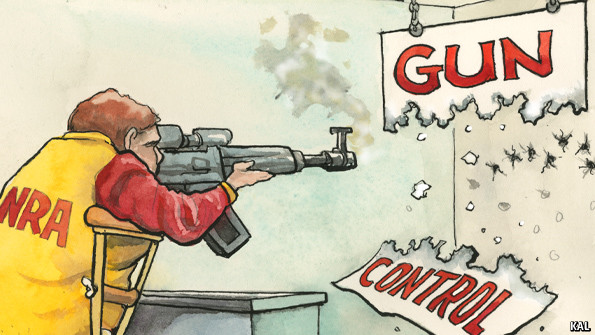 The Results that We Got: The Contradictions of American Gun Violence

There is a problem in America with the economics of safety. Early in Evan Osnos’ stunning New Yorker article on the subtle proliferation of gun ownership and gun discourse in America, he quotes Smith & Wesson CEO P. James Debney as “very pleased with the results that we got” in a sales increase surrounding personal protective firearms. The results, in America, vary heavily depending on what political perspective one takes, as red and blue rarely skews black and white regarding the Second Amendment.

Outside ideological differences, the entire equation surrounding gun control tilts away from logic and towards feelings. Quantitative analysis is strangely absent in most discussions regarding guns in America, and most gun manufacturers would love to keep it that way – unless they’re discussing sales figures.

Available statistics often come from gun industry trade magazines or actual gun policy. The numbers gathered in Osnos’ piece are stunning. In two decades, concealed carry permits have went from being illegal in twenty-two states to legal in all states, with nearly 12.8 million active permits in the United States.

In 1999, self defence was cited as the reason for gun ownership in 26 per cent of industry respondents – in 2013 this answer was given more than any other reason. The ownership pool was shrinking, however, as Osnos notes that gun owners now own an average of eight guns each. Osnos’ ultimate statistic may shock, but more defines the constant locus of violence in contemporary American society: “more American civilians have died by gunfire in the past decade than all the Americans who were killed in combat in the Second World War.”

Again, the speculative nature of such statistics complicates any argument for gun control. Due to the extensive gun lobby and the National Rifle Association (N.R.A.), the Centre for Disease Control (C.D.C) cannot receive federal funding to study gun deaths in America. Such studies, or any real evidence to the effects of guns and gun violence on American citizens run contrary to the ethos of the N.R.A. Consequently, the group needs to maintain its aging and dwindling base of support. Osnos notes that ”the problem with failing to recruit and grow [gun supporters] is that numbers equate to political power.” What tricks then, can the gun industry reuse to invigorate their core base of gun-toting Americans?

History offers the worst kind of inspiration. Traced from the rural to urban migration (and the pure white panic after the Rodney King verdict in the early 1990s), gun advertising around personal safety has always contained an implicit racial component – be in the threat of 9/11 and the response, in armament, of 9/12 or the current push for conceal-carry civilians armed against ‘Radical Islam.’

Fear and preparedness form the twin bastions of patriotic gun ownership in America – tragedy does not demand a revisitation of how and why guns are available, but a redoubled vigilance, a tighter grip, and a truer aim. The dissonance between perception and reality regarding gun violence in America becomes Osnos’ refrain: violent crimes are going down each year but people feel less and less safe.

Osnos final observation outlines the true double-bind of gun politics in America. If Donald Trump were to become president, the gun lobby would have a true ally in the Whitehouse. If Trump were to lose, those same embittered N.R.A. supporters would simply cling tighter to their weapons, decrying the new round of persecution gun owners face for simply wanting to protect them and theirs.

Jon Favreau and Dan Pfeiffer, two formers Obama staffers who co-host a pro-Democrat podcast, reach a similar conclusion in their evaluation of the House Democrat sit-in regarding gun control policy. Both spoke to the capriciousness of the no-fly list (a major talking point for new gun legislation that supposedly leans in a bipartisan manner) but more so discussed the Democratic policy as something that looks good in an attack advert but has no real agenda past political windmill-tilting. Real change, it seems, can never materialize when politics gets in the way.

The recent tragic events in Orlando, where Omar Mateen brutally murdered forty-nine and injured fifty-three people using a semi-automatic pistol and rifle, only exacerbate a disastrous American dichotomy on guns. After the requisite forty-eight hours of mourning (aside from a tone-deaf Donald Trump tweet or two), each side of the political spectrum puts on their tired and tawdry battle armor, preparing for the usual media mud-slinging. Gun lobbyists prepare speeches wishing for a single armed patriot present at Pulse that night.

Those demanding better gun control speculate on the means through which Omar Mateen obtained his weapons for his hateful mission. In the midst of infighting, another column of statistics are left uncounted in the continuing decades of gun violence in America. Fear and anger both do their part in ignoring the daily enormity of human loss in tragedies like the Orlando massacre. One side of the results are measured in sales dollars earned and polling points shifted, while the other deals in absented persons and unanswered questions. We cannot be happy with the result of such calculus.