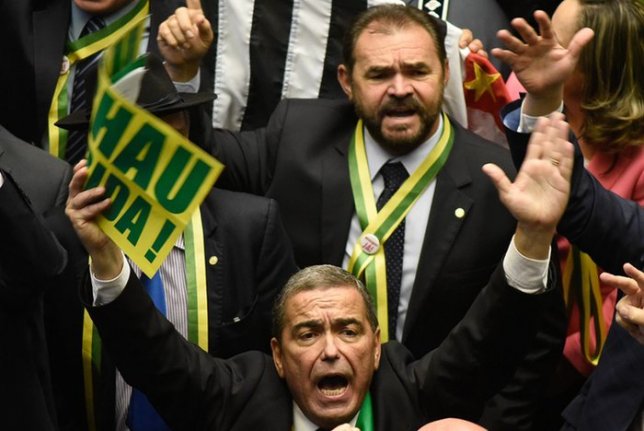 “I Am a Victim of Injustice”: Dilma Rousseff and Sexism in Brazilian Politics

Brazil’s President Dilma Rousseff faces an impeachment trial after accusations of burying an important budget deficit to guarantee her re-election in 2014 sparked massive public outrage. The Senate voted 55-22 to suspend her for 180 days, ending the thirteen-year rule of the Worker’s Party.

Brazil’s first female president denounced this decision as a “coup,” declaring that “when an elected president is suspended as a result of a crime she hasn’t committed, the name we give is not impeachment but a coup.”

Rousseff refuses to take responsibility for any wrong-doings during her presidency, although during her impeachment trial, she admitted that she regrets the coalition she created with her Vice President Michel Temer, since he turned against her during the trials.

Conveniently, Temer took over Rousseff’s responsibilities as interim president, with a cabinet made up of an all white, male ministers. Temer’s white male cabinet highlights the systemic issue of sexism in Brazilian politics, and leads to the speculation that Rousseff payed the price of being a woman in the Brazilian political realm.

In fact, Temer appointed various ministers implicated in corruption scandals. AlJazeera reported that at least sixty percent of politicians in Brazil are “under investigation or indictment for crimes ranging from attempted murder to massive corruption, including the president of the senate who will be overseeing Rousseff’s impeachment trial.” Yet, it seems like only Rousseff is being punished for the culture of corruption in Brazil.

Rousseff is the first female president in Latin America. The Brazilian Senate is 16 percent female, while the Lower House is comprised just about 10 percent women. Still, Temer’s government is the first all-male cabinet Brazil has had since 1979.

The gender bias against Rousseff started before her first election in 2010. Media coverage insisted on her lack of femininity and “sex appeal” while underlining the fact that she was divorced and never remarried. She was qualified as “aggressive,” “strict,” and “too serious,” in comparison to the charismatic President Lula.

At the time, Rousseff was already listed by Forbes as the 16th most powerful person internationally, but was still considered by many Brazilians as unfit for the political sphere. These reactions and comments effectively pressured her into getting plastic surgery during the presidential campaign, in order to fit the standard of beauty socially imposed on her. Rousseff had to change drastically to appeal to the Brazilian expectations of a woman. Following her transformation, media outlets rushed to discuss her physical changes, the color of her lipstick, her outfits, or her different hairstyles.

Rousseff’s gender is not the only reason for her impeachment, but it has undeniably worked against her. Rousseff’s womanhood was politicized to guarantee her impeachment. Multiple congressmen held up signs reading “Tchau querida” as they voted to suspend her in the lower house. Magazines argued that Rousseff did not possess “the emotional control to run the country”. The first female President claimed “there are attitudes towards me that wouldn’t exist toward a male president.”

Rousseff’s impeachment raises the spectre of sexism in Brazilian politics and society. Does the reaction against Rousseff point to the comeback of a conservative Brazil attached to traditional family values where women are unfit for politics? Or perhaps Brazilian sexism has never really gone away.

To justify the lack of women in his cabinet, Temer argued that no political party suggested he nominate a woman. Instead, the executive branch includes multiple sons of political officials who do not have any formal political experience. Temer has emphasized the fact that his Chief of Staff was a woman but used the term “secretary” to refer to her position.

Temer has also promised that his wife, Marcela Temer, will have a function in the social sector of the government, but felt it necessary to describe her as “beautiful, reserved, and domesticated.” Rousseff reacted to Temer’s cabinet saying that “Black people and women are fundamental if you truly want to construct an inclusive country”

Over the past few weeks, new information has surfaced that links the Temer’s government to the Petrobras corruption scandals. Transparency Minister Fabiano Silveira and Senate President Renan Calheiros made a plea bargain with Petrobras. Temer himself was accused of corruption, but not put on trial. This latest scandal is symbolic: the female leader of one of the world’s biggest countries is singled out in ways that her male counterparts never are or will be.