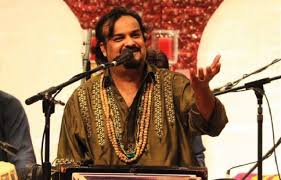 In Dedication to Amjad Sabri & All Qawwals

Qawwalis can be deadly. Case in point: the assassination of Pakistani Qawwal Amjad Sabri, brought down June 22 in a hail of bullets fired by two gunmen on a motor-bike as he drove with a friend in the ultra-violent city of Karachi.

A splinter group of the Islamic fundamentalist Tehrik-e-Taliban-e-Pakistan (TTP) claimed responsibility, but gave no reasons. The claim could not be verified.

Predictably, the investigation led by the Counter-Terrorism Department has thrown up mixed signals hinting at personal feud, property dispute, and the MQM party which holds sway over Karachi.

A few hours later, gunmen in another part of the city tried to kill Sabri’s friend Farhan Ali Waris, a popular reciter of Noha, the mournful poetry Shi’as chant to recall the martyrdom of Imam Hussein at Karbala in 680 AD.

Muslim fundamentalists, especially those of the pro-Saudi Wahhabi type, routinely target Sufis and Shi’as who represent two of the most tolerant and inclusive currents in Islam – and which literalist Wahhabis cannot fathom nor accommodate.

The Qawwali (from the Arabic Qaul or Spoken Word) has deep roots in Islamic, and Pre-Islamic, culture. But it is the specific product of Islam in India, where Sufism blended with Hindu mysticism (Bhakti) and sprouted the devotional singing that is associated with the shrines of saints, visited by people of all faiths across the Asian subcontinent.

The Qawwali focuses on the deep and intimate human relation to God and the prophet – and often derides the sanctimonious practitioners of Islam, Pharisees who do it just for show, profit and material power.

In today’s context of rampant armed, ultra-violent Islamic fundamentalism manipulated for political ends, the Qawwal (Singer of Qawwalis) reminds us of the learned masters who, when summoned by the Emir or Sultan, would go carrying their own coffin and shroud.

The Qawwali below, by the late Nusrat Fateh Ali Khan (with lyrics from Nasir Iqbal), is a typical example of Sufi satire targeting the hypocritical devotees. Its superficial theme calls on God, over and over, to “protect us against the charms and the traps of Beauty”, an obvious enough topic in a patriarchal and macho society – where every one on stage is visibly a male.

But, interspersed throughout, are verses that make it clear the lethal Beauties here are the devotees who just come to pray for show and influence. They are likened to “painted belles” who set traps for their fellow humans.

The very opening couplet says: “A beautiful face needs no make-up/Simplicity has its very own allure”. This shifts to: “The sheikh bows down before God in the mosque/But there’s no guarantee his prayers have any effect”. The meaning becomes clear in the conclusion when the Qawwal says: “They come to pray with dreams of virgins in Paradise, May God protect us from such God-lovers!”