Home > English > Alternatives International Journal > 2014 > December 2014 > The Nanavati Commission: Another Hoax On The People Of India! 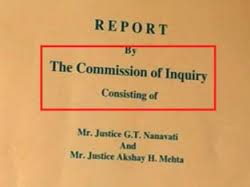 The Nanavati Commission: Another Hoax On The People Of India!

Finally, yesterday (November 18th 2014), exactly 12 years 8 months and 12 days after it was first constituted by the Gujarat Government on March 6th 2002 to probe the burning of the Godhra train and the subsequent carnage which broke out in several parts of Gujarat, the Commission headed by G.T Nanavati (a former judge of the Supreme Court of India) submitted its report to the current Chief Minister of Gujarat, Anandiben Patel.

It was originally known as the K.G. Shah Commission but it was later reconstituted to include Justice Nanavati, after several civil rights groups and individuals protested over the closeness that Justice Shah had with Narendra Modi. Justice Shah died in 2008; and Justice Akshay H. Mehta (who granted bail to Babu Bajrangi in the Naroda Patiya case) was appointed on 5th April 2008 to be a member of this Commission.

The content of this more than 2000-page report has not yet been made public but if one goes by the grapevine and what seems to be “leaked out” to sections of the media, then one can very easily conclude the following: that those really responsible for the law and order in the State have been given a ‘clean chit’; that the burning of S-6 Coach of the Sabarmati Express on 27th February, 2002, just outside the Godhra railway station was a ‘meticulously planned act of conspiracy’ (this was already said in the Commission’s interim report in 2008); and finally the only people who seemed to be ‘responsible’ for not preventing or controlling the violence are some lower rung policemen and some apparently anti-social elements.

The Commission which has claimed to have looked into 4,160 cases of violence in Gujarat between February 27th and May 31st 2002 also states that it has gone through 46,000 affidavits submitted by over 4,000 victims of the violence that paralysed Gujarat and continues to be one of the darkest and bloodiest chapters of independent India. It was given 24 extensions (of almost six months each) before it submitted its report. Till July 2012, the Commission ran up an expenditure bill of more than Rs.5.00 crores with an additional miscellaneous expense of Rs.1.62 crores. It has been past two and a half years since; so the final cost of this Commission (including the disguised expenditure) will surely run to a mind-boggling amount and all at the cost of the State exchequer (a Gujarati newspaper today puts a conservative cost of Rs.9.00 crores)

Several concerned citizens like the late Mukul Sinha of Jan Sangharsh Manch, Sanjiv Bhatt and others have tried their level best to bring the Commission – any thinking citizen will know - on track and ensure that truth prevails and that the victim-survivors are given justice. The Commission, has been full of inconsistencies, lapses and loopholes. Sinha who cross-examined several witnesses, has consistently demanded that Modi who was the Chief Minister of Gujarat at that time, had to be interrogated too. Why the Commission took the pains to deny this request from Sinha and several others does not leave much room for doubt!

Even though the Commission has submitted its report, many for the victim-survivors (and several others who have accompanied them) are the Gujarat Carnage of 2002 is not a closed chapter. The relentless pursuit for truth and justice will continue until those who presided over this carnage are brought to book. Only then, will they truly be able to sing our motto emblazoned on our national emblem “satyameva jayate” (truth alone triumphs!)

Fr. Cedric Prakash sj is the Director of Prashant, the Ahmedabad-based Jesuit Centre for Human Rights, Justice and Peace