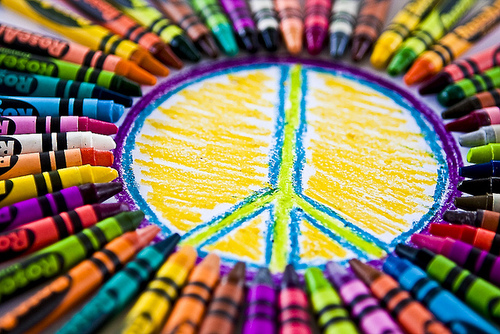 The official mythology is that between 1945 (or 1946) and 1989 (or 1991), the United States and the Soviet Union (USSR) confronted each other continuously - politically, militarily, and above all ideologically. This was called the "cold war." If it was a war, the word to underline is "cold" since the two powers never engaged in any direct military action against each other throughout the entire period.

There were however several institutional reflections of this cold war, in each of which it was the United States, and not the USSR, that took the first step. In 1949, the three western countries occupying Germany combined their zones to create the Federal Republic of Germany (FRG) as a state. The Soviet Union responded by restyling its zone as the German Democratic Republic (GDR).

In 1949, NATO was established by twelve nations. On May 5, 1955, the three western powers officially ended their occupation of the FRG, recognizing it as an independent state. Four days later, the FRG was admitted to membership in NATO. In response to this, the USSR established the Warsaw Treaty Organization (WTO) and included the GDR as one of its members.

The treaty establishing NATO was supposed to apply only within Europe. One reason was that the western European countries still had colonies outside of Europe and did not wish to allow any agency to have the authority to interfere directly in their political decisions concerning these colonies. The moments of seemingly tense confrontation between the two sides - the Berlin blockade, the Cuban missile crisis - all ended with a status quo ante outcome. The most important invocation of the treaties to engage in military action was that of the USSR to act within its own zone against developments they deemed dangerous to the USSR - Hungary in 1956, Czechoslovakia in 1968, Poland in 1981. The United States intervened politically under similar circumstances, such as the potential entry of the Italian Communist Party into the Italian government.

This brief account points to the real objective of the cold war. The cold war was not meant to transform the political realities of the other side (except in some moment very far into the future). The cold war was a mechanism for each side to keep its satellites under control, while maintaining the de facto agreement of the two powers for their long-term partition of the globe into two spheres, one-third to the USSR and two-thirds to the United States. Priority was given by each side to the guarantee on the non-utilization of military force (especially nuclear weapons) against each other. This came to be known as the guarantee against "mutually assured destruction."

The collapse of the USSR in two stages - the withdrawal from eastern Europe in 1989 and the formal dissolution of the USSR in 1991 - should have meant in theory the end of any function for NATO. Indeed, it is well known that, when President Mikhail Gorbachev of the USSR agreed to the incorporation of the GDR into the FRG, he was given the promise that there would be no inclusion of the WTO states into NATO. This promise was violated. Instead, NATO took on a new role entirely.

After 1991, NATO bestowed on itself a role of world policeman for whatever it considered appropriate political solutions to world problems. The first major effort of this type occurred in the Kosovo/Serbia conflict, in which the U.S. government threw its weight behind the establishment of a Kosovo state and a change in regime in Serbia. This was followed by other such efforts - in Afghanistan in 2001 to oust the Taliban, in Iraq in 2003 to change regime in Baghdad, in 2014 to fight the Islamic State (ISIS) in Iraq and Syria, and in 2013-2014 to support so-called pro-Western forces in Ukraine.

In point of fact, using NATO itself turned out to be difficult for the U.S. For one thing, there were various kinds of reluctances of NATO member states about the actions undertaken. For another thing, when NATO was formally involved, as in Kosovo, the U.S. military felt constrained by the slow political decision-making about military action.

So, why then the expansion of NATO instead of its dissolution? This had once again to do with intra-European politics, and the desire of the U.S. to control its presumed allies. It was in the Bush regime that the then Secretary of Defense Donald Rumsfeld talked of an "old" and a "new" Europe. By old Europe, he was referring especially to the French and German reluctance to agree with U.S. strategies. He saw the western European countries as moving away from their ties to the United States. His perception was in fact correct. In response, the U.S. hoped to clip the wings of the western Europeans by introducing eastern European states into NATO, which the U.S. considered more reliable allies.

The conflict over Ukraine illuminates the danger of NATO. The U.S. has sought to create new military structures, obviously aimed at Russia, under the guise that these were meant to counter a hypothetical Iranian threat. As the Ukrainian conflict played on, the language of the cold war was revived. The U.S. uses NATO to press western European countries to agree with anti-Russian actions. And within the U.S., President Barack Obama is under heavy pressure to move "forcefully" against the Russian so-called threat to the Ukraine. This combines with the large hostility in the U.S. Congress to any accord with the Iranians over nuclear development.

The forces in the United States and in western Europe who are seeking to avoid military folly risk being overtaken by what can only be called a war party. NATO and what it symbolizes today represents a severe danger because it represents the claim of western countries to interfere everywhere in the name of western interpretations of geopolitical realities. This can only lead to further, highly dangerous, conflict. Renouncing NATO as a structure would be a first step towards sanity and the world’s survival.