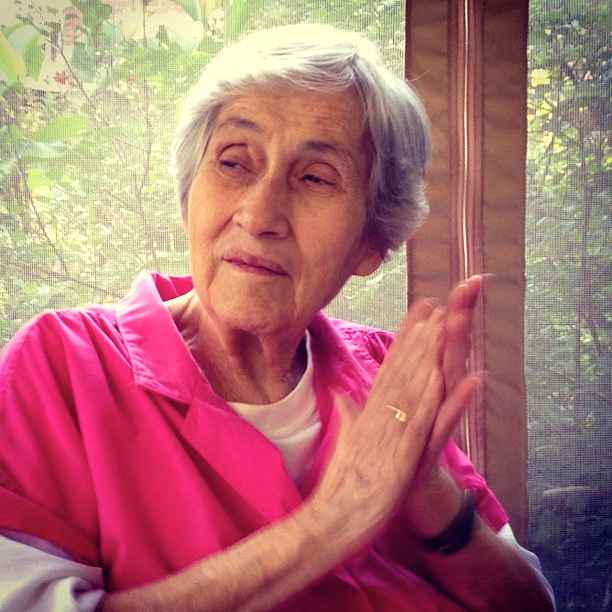 "Let me not forget that I am the daughter of a woman who herself … never ceased to flower, untiringly, during three quarters of a century." Sidonie Colette

A widely recognized public voice in the Montreal community, Janet Weinroth rose to prominence in the early 1980s as possibly the city’s first (female) Jewish critic of Zionism, committed to exposing Israel’s brutal oppression of Palestinians, from its beginnings in 1948, through its decades-long Occupation of the West Bank and Gaza. Janet’s first public outcry at a Montreal rally occurred in 1982 when she passionately denounced Ariel Sharon for abetting the Sabra and Shatila massacre. Her courage in speaking out came with a heavy price. She was summarily dismissed from McGill University’s Jewish Studies Department where she had been a much-loved Hebrew language instructor.

The year 1982 marked a watershed in her life. Following the Sabra and Shatila episode, she embarked on a mission to raise consciousness about the Israeli Occupation. Together with a small group of committed Palestinians, Arabs, and Jews (RDIP: Regroupement pour le Dialogue Israël-Palestine), she organized lectures and speaking tours for outspoken critics of Zionism, such as Felicia Langer and the former Israeli General Matti Peled, father of Miko Peled (author of The General’s Son, Journey of an Israeli in Palestine). During the late 1980s and 90s, she seized every opportunity to intervene in public debates about the Palestine-Israel question, bringing her message to the mainstream media (notably to Cross Country Check-Up on CBC Radio and most memorably to a CBC television news show hosted by Dennis Trudeau, where she faced off against Harold Waller of McGill University’s Political Science Department). She attended every possible lecture, political meeting, or event where her voice could be heard. A decade later, eager to intensify her activist work, she joined PAJU (Palestiniens et Juifs unis-Palestinian and Jewish Unity), an organization founded by Bruce Katz and Rezeq Faraj in 2000, and still vibrant today.

Bruce Katz recalls that Janet came to PAJU with considerable political savvy and a lifetime of acquired skills in political organizing. Familiar with strategies of agitation and education, she was also a magnet of humanitarian compassion. Deeply moved by the suffering of others, and governed by an untrammelled belief in social justice, she spoke uninhibitedly about the violence of Israel’s colonialist regime. In the face of reprisals from Montreal’s Zionist community, she remained unshaken. She was a fiend for gathering critical analyses, notably from sources outside the mainstream. Her political knowledge was steeped in the poignant (and highly documented) writings of Amira Hass, Gideon Levy, and Ilan Pappe. She was a communications hub, receiving and disseminating information to others (much of it provided by Ed Corrigan and Sid Shniad), raising funds and stimulating discussion around events such as the celebrated play, “My Name is Rachel Corrie.” Together with her fellow PAJU members, she and her (second) husband, Jean-Philippe Aubert, prepared leaflets for distribution at weekly vigils before the Israeli consulate in Montreal. For several years, they worked collaboratively and constituted a network of ad hoc editors and translators, collecting and condensing critical and informative articles into short bilingual texts. At the vigils, these eye-catching leaflets countered the conservative press and exposed the complacent passerby to the atrocities of the Occupation.

Janet was about eighty-one years old when she last attended those vigils. At those gatherings, PAJU members regularly faced (and doubtless still face) the jeers of pro-Zionist demonstrators, the heckling, railing, and waving of Israeli flags. But even in her last years of active protest, she was fearless, willing to brave that hostile phalanx of political adversaries on the other side of the divide, as well as the merciless Canadian winter wind – if only to keep the flame of her beliefs alive and the hope that one day she, like others, might see the end of the Occupation.

Considerably older than other activists in her midst, she was often perceived as a mother figure, a matriarch who helped the less informed resist and dispel the rampant conflation of anti-Zionism with anti-Semitism. She earned the respect of her activist peers precisely because her knowledge of Zionism was grounded in first-hand experience. Nurtured on the doctrines of Hashomer Hatzair, the American Zionist youth movement, she and her first husband sacrificed family and home, prestigious university scholarships, and material comfort to build ‘the new land.’ But within a few months of settling in a kibbutz, they both made an about-turn. Witnessing corruption and flagrant social iniquities in that otherwise romantically cast world of ‘cheerful’ agrarian workers, they discarded their Zionist ideals, and actively sought to redress the wrongs of their Zionist settlement, defending the human rights of the oppressed, most notably of victimized Arabs and Sephardic Jews. They waged this struggle in the kibbutz, and later in Jerusalem, amid formidable forces of reaction.

The origin of Janet’s political dissent can be traced back to her early youth. The youngest of four children, she was brought up in Newark, New Jersey, in a large immigrant family that suffered economic hardship during the Depression. Her academic abilities and her passion for knowledge brought her into the world of inspiring rabbis and intellectuals. Rabbi Joachim Prinz, a civil-rights activist, was among her influential mentors.

At age 14, her political consciousness began to burgeon under his aegis. Defying her own family’s proscriptions and racist biases, she surreptitiously attended inter-racial meetings devoted to vindicating civil rights for Black African Americans. In 1945, at age 16, she met her future husband, Howard Weinroth. Both she and Howard were already ardent activists when they met in the Zionist Youth Movement. They were also committed tribunes of social justice. Their assigned mission was to rouse commuters in the New York subway cars, to raise consciousness about the horrors of the Holocaust and the plight of the war’s refugees. Aflame with utopian zeal, they believed that they could bring about a form of Zionist Socialism to Israel. Young and passionate, they were undeterred, for their actions were governed by one central ideal: to help cultivate the kibbutz (the now prosperous Tel Amal) and make it the microcosm of a new social order. At the time, it seemed to them like a calling of noble worth that could not be left unheeded.

They were, to be sure, Zionist pioneers of the early 1950s; but both Janet and Howard were also pioneers of disillusionment. They were among the first kibbutz settlers to challenge Israel’s expansionism, its illegal appropriation of Arab land by stealth and intimidation, and the growing racism that accompanied Israel’s colonialist incursions, from the late 40s onwards. Embittered by the injustices that they both experienced and witnessed in Tel Amal, the young couple saw their Zionist ideals dissolve within a matter of two or three years. Both were ostracized for questioning the kibbutz’s expansionist practices and racist attitudes towards Arabs. Although initially recruited to teach English and History to kibbutz youth, Howard was eventually sent to work in the fishponds where his political views would be ‘held at bay’; in this, he was effectively being silenced. McCarthyism had clearly planted its roots in Israeli soil. But, at the end of four years, he spoke uninhibitedly through a one-man hunger strike, staged in the kibbutz’s common dining hall. This was the breaking point.

Having lost the support of most of their Zionist ‘compatriots,’ Janet and Howard were soon subjected to intimidation. The signs of aggression were evident in their ransacked room. A few allies quietly urged them to leave the kibbutz in haste. Howard fled with his 2-year old daughter to Haifa; Janet made her escape shortly after, having sought one last chance to defend her husband’s political position before her fellow kibbutzniks. She was beaten up for her outspokenness and then promptly ‘ex-communicated.’ A nearby medical centre in the outskirts of the kibbutz refused to give her medical attention. Bad press had already preceded her; malicious gossip then spread like wildfire. Once deemed the model nursery school teacher of Tel Amal, regularly lauded and showcased to visitors from abroad, she was abruptly repudiated and blacklisted as a traitor.

After their narrow escape, the couple settled in Jerusalem and thereafter in Tel Aviv. Throughout those years, both Howard and Janet witnessed an increasingly flagrant form of settler colonialism developing in Israel. What transpired before their eyes between 1951 and 1955 in the kibbutz was but a foreshadowing of a vast and complex process of expansionism yet to unfold. Those early pioneering years not only marked Janet and Howard’s politics, they henceforward shaped the couple’s critical and embittered attitude towards Zionism as such. In 1969, after a four-year stay in Cambridge, England, where Howard completed his PhD, they returned to Israel. The Six-Day War was now over and the country was brimming with triumphalist euphoria. Anti-Arab sentiment had swept the nation. Israeli patriotism, they felt, had become claustrophobic and oppressive, foreclosing any minor utterance of dissent. Once more marginalized and alienated within their social circles of friends, they abandoned all prospects of pursuing their political ideals within Israel. They left for Canada in 1969 where Howard secured a tenured academic post in history at McGill University.

On January 1, 1976, Janet’s life with Howard came to an abrupt end when he was struck by a massive heart attack. But as her 25-year companion and political mentor, and as a brilliant historian who foresaw, already in the early 50s, the catastrophic signs of an unbridled Israeli ‘empire,’ Howard bequeathed a wealth of knowledge and political understanding that remained with Janet till the last. In 1982, her children having flown the coop, she once more took up the torch of activism, and carried forward his legacy of social protest in the mode she knew best: in powerful political oratory and in patient political education, speaking out tirelessly for a cause that became her life’s guiding thread.

I write these words not only as a tribute to my mother, not only to honour her life and work for the cause of peace and humanity, but because I believe that she embodied the disillusionment and awakening that many Jews are now experiencing in Canada and elsewhere in the Diaspora. Indeed, she offers a beacon of light for those of us who are still here today, able to denounce and combat Israel’s brutal occupation of Palestine. To be sure, while her optimism was sustaining for many, it was not always easy to emulate. For she was a child of postwar idealism, forever uplifted by an exuberant spirit that a younger generation of the 21st century may not always share. Public awareness of global ecological perils has tempered the confidence and ‘innocence’ of the 1950s. Nonetheless, her capacity to preserve hope against great odds was, and will always be, undeniably inspiring.

My mother’s most significant bequest, I believe, lies in her honesty – in her ability to confront her erstwhile faith in Zionism, to renounce it unabashedly, and to hoist herself onto a new level of thinking. Nor was this breakthrough merely intellectual; it was an act of moral strength. During her years of political struggle, she repeatedly faced hostility from the Montreal Zionist lobby and stoically suffered disapproval from her close kin in the US. If she has something to offer our younger generation today, it is the reminder that one of the most powerful and longstanding ideologies to date – Hasbara – will need to be dismantled fully, if peace in Palestine is to be achieved. Such a bold act will require a gargantuan collective effort, one fuelled by considerable moral strength: tenacity in confronting the Zionist institution; compassion and understanding in educating the public, and courage before the setbacks that irrationalism and social chaos are likely to spawn in times of intense conflict. These were my mother’s values, and she stood by them to the end of her activist days.