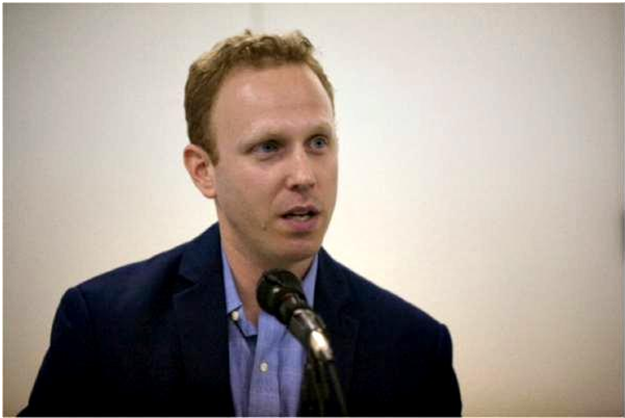 US Journalist Blumenthal Sees Similarity in Islamic State And Israel

STUTTGART: When Gaza was attacked during the summer, Angela Merkel promised to “stand by the side of Israel.” The German chancellor has done much more than offer verbal support for Israel’s crimes. Under her leadership, the Berlin government has been equipping Israel with submarines that reportedly carry nuclear weapons.

Some German politicians have tried to muzzle debate about Israel by denouncing its critics as “anti-Semites.” The American journalist Max Blumenthal — author of Goliath: Life and Loathing in Greater Israel — faced such a smear on a recent speaking tour in Germany.

A number of elected politicians alleged that a scheduled talk by Blumenthal and his colleague David Sheen in a Berlin theater would serve “to promote anti-Semitic prejudice.” This was deeply ironic: both Blumenthal and Sheen are themselves Jewish. The politicians denouncing them failed to produce any evidence that they are hostile towards fellow Jews.

Emran Feroz: You recently witnessed the destruction caused by Israel in Gaza. What scenes had the most effect on you?

Max Blumenthal: Emergency operations had to be performed in dentist chairs, while the bodies of dead children had to be laid in ice boxes, which were originally designed for ice cream. Those were probably the most shocking testimonies I heard.

EF: Not long after your trip to Gaza, you started using the hashtag #JSIL (Jewish State of Israel in the Levant) on Twitter. Making this kind of comparison between the group Islamic State and Israel is taboo in Germany. Why did you dare to do this?

MB: It is strange that you equate, in Germany, IS with Hamas or describe the entire Palestinian national movement as “heirs of the Nazis,” while there is such an outrage regarding my comparison. It was not a direct one-to-one comparison, but I wanted to point out the hypocrisy behind supporting one religiously exclusive state that forces minorities out of its territory while attacking another.

EF: But by using this hashtag, you must be suggesting that Israel and IS are somehow similar.

MB: Sure, they are. The “Jewish state” has no internationally recognized borders. The same relates to the “Islamic State.”

Both constructs have emerged after the original indigenous population were partly expelled and ethnically cleansed. In the case of Israel it was the Palestinian indigenous population; in the case of the IS [they] are the Christians, Yazidis or Shiite Muslims. Both “countries” rely on a religious exclusivity in the Levant. And both think they represent all Muslims and Jews worldwide and thereby help inspire Islamophobic and anti-Semitic sentiments.

Both the Jewish state and the Islamic State recruit confused young men from around the world as foreign fighters to engage in atrocities. When Israel’s defenders failed to address the comparisons on their merits, they simply attempted to hijack the #JSIL hashtag by declaring it stands for the “Jewish State of Israel Lives.”

EF: IS fighters behead their victims and then spread the videos of the beheadings through YouTube and social media. Do Israeli soldiers also make such videos?

EF: How present is religious extremism inside the Israeli military?

MB: It is very present. A major figure of the last military operation in the Gaza Strip was commander Ofer Winter, who was celebrated as a national hero. Prior to the mission Winter said to his troops, that the Palestinians had sinned against God and therefore all must be punished.

So he declared a literal “holy war” against the Palestinian people. This is not the only way Winter has expressed the religious extremism that is rising in Israeli society. In one instance, an Israeli singer wanted to perform in front of [Winter’s] soldiers. He refused [permission] to do so and said that a woman is not allowed to do that.

EF: Many women are part of the Israeli army. This is celebrated in what are effectively promotional campaigns for Israel. How can there be misogyny in the Israeli military if it has many female members?

MB: What is not mentioned is the fact that it is more likely that these women are assaulted by their male counterparts in the army than by Palestinians. I think that only imperialist feminists argue that women can be emancipated in an army like the Israeli one.

Good examples of this type of feminism are political figures like Samantha Power or Angela Merkel or Tzipi Livni because their peculiar brand of feminism goes hand in hand with the imperialistic interests of the western powers who are so invested in majority Muslim countries, where the population is portrayed as culturally backwards and in need of “liberation.”

EF: During the last attack on Gaza, the family of Ibrahim Kilani — who are German citizens — were killed. His son Ramsis, who lives in Germany, said that up to today nobody has apologized to him. The German government has not called him a single time. How can you explain this behavior?

MB: The behavior of the German government shows not only the lack of interest in the rights of the Palestinians, but also the very lives of them. The life of these people is practically non-existent in Germany. They are the new “un-people.”

The German foreign minister issued condolences for the families of those German citizens killed on an airliner over eastern Ukraine, possibly by Russian separatists. But they’ve said nothing to the Kilani family.

The negation of Palestinian lives has been German policy since the days of Konrad Adenauer [chancellor of West Germany from 1949 to 1963]. In those days Israel had no problem to negotiate on Holocaust reparations with the head of the chancellery, Hans Globke, who was a known Nazi in the Third Reich. This cash flow from Germany went directly to the Israeli occupation machine that has made the Palestinians indirect victims of the Holocaust.

The current bloodshed is a result of this policy and every German should ask himself: how does this policy honor the Holocaust?

EF: Your willingness to make such statements probably explains why some German politicians do not want to see you here in Germany. What happened to you exactly?

MB: Some politicians, such as Volker Beck, a parliamentarian from Germany’s Green Party, had launched a campaign to silence us — me and the journalist David Sheen. The reason for this is the fact that they do not want to know of another version of Judaism and they certainly do not want to hear about the facts on the ground.

Their attitude actually promotes anti-Semitism. It is simply anti-Semitic to equate Zionism with Judaism and to limit Jewish identity to the narrow confines of Israeli nationalism. For a gentile politician to do it is beyond disgusting.

EF: The Gaza Strip remains destroyed. And, according to some media outlets, a third intifada is going to happen in the occupied West Bank. Is this really the case or is it just scaremongering?

MB: Last year the al-Aqsa mosque [in Jerusalem] was stormed “only” eight times by Israeli soldiers. This year this happened 76 times. Radical religious elements have announced that they want to demolish the mosque to build a Jewish temple. If this happens, the situation will take on global implications that will be approach the apocalyptic.

The whole conflict is taking on a religious dimension, which is devastating for all involved, and, as I said, will promote radicalization around the globe. I think the third intifada actually is at the door.

However, I believe that this word — intifada — does not adequately describe the situation. It is not effective enough to describe what is actually going on. At that time — in the case of the first and second intifadas — this term was appropriate.

Now with so many Palestinian political leaders in prison or dead and such a complex matrix of control imposed on them, a nationwide revolt cannot take place. What we are seeing is creative resistance with limited means occurring on a national level but at sporadic moments.

And it will continue and intensify as long as the status quo is in place. It is that deadly status quo that German foreign policy protects and promotes.

(ELECTRONIC INTIFADA. Emran Feroz is a Germany-based freelance journalist, blogger and activist. He is also the founder of Drone Memorial, a website listing victims of drone attacks. )