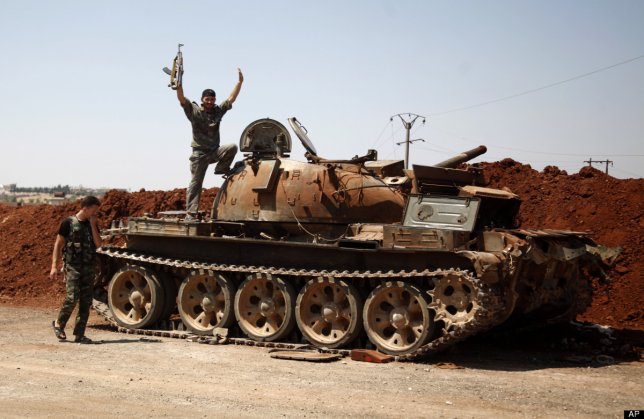 Amid the many and ever-evolving shifts of policies and geopolitical alliances in the various countries of the Middle East, one used to be at least sure what are the prime objectives of the major actors, both in the region and in the outside world.

This is not true of Syria today. Syrian politics today are formed by a triad: supporters of the Bashar al-Assad regime; supporters of the caliphate that calls itself the Islamic State (IS); and so-called moderate Islamic groups that claim to be fighting both of the other two groups. Triadic struggles are notoriously difficult both to analyze and to predict because triads have an almost fatal way of reducing themselves in the relatively short run to a clearer two-sided struggle. However, in this case many of the main actors in the region and beyond are highly ambivalent about what it is they want. Many of them prefer to maintain the triad if they can, and are afraid of being forced to choose to which dyad they give priority. This ambivalence is particularly true of Turkey, although also of Saudi Arabia and the United States.

Turkey shares a large border with Syria. It has been governed for some time now by the AKP (Justice and Development Party), an Islamic party that seeks to project itself as oriented to Islamic values and practices but nonetheless tolerant of other perspectives and commitments. It started its rule with an announced foreign policy of maintaining its links with the western world as a member of NATO and a country seeking to join the European Union while at the same time attempting to restore Turkey’s role as a major power in the Middle East, one that would maintain good relations with all other Middle Eastern countries.

When the civil war began in Syria, Turkey offered its services as a mediator. In the process, at some point, Turkey’s President Recep Tayyip Erdogan thought that Syria’s President Bashar al-Assad had lied to him. Deeply affronted, he turned from being a mediator to being a leading proponent of a change in Syrian regime.

Turkey has a very large Kurdish minority to which the successive governments have always denied recognition, devolution, and linguistic rights. Ever since the establishment of a Turkish republic over ninety years ago, Turkish governments have reacted to Kurdish demands with total suppression, some even denying that there was such a group as the Kurds. Some thirty years ago, a Kurdish militant Marxist-Leninist movement, the PKK (Kurdish Workers’ Party), sought to achieve Kurdish objectives with armed revolt. The leader of this movement, Abdullah Ocalan, was captured and sentenced to life imprisonment.

A few years ago, the present Turkish regime changed course and surprised the world by entering into negotiations with the PKK to see if a compromise could be realized. For its part, the PKK indicated that they no longer were a Marxist-Leninist movement and were ready to contemplate devolution as an objective instead of independence for the Kurdish region. These discussions have been difficult but ongoing and seemingly promising.

The Syrian civil war upended the internal situation in Turkey. The caliphate forces (so-called IS) expanded considerably in northern Syria and have been seeking to control the Syrian side of the border with Turkey. This is actually a region peopled largely by Syrian Kurds. Their main movement, the PYD (Party of Unity and Democracy) has been the principal target of IS attack as well as the principal force in the zone that is resisting the advance of the IS. The IS is presently attacking Kobani, the de facto capital of the Syrian Kurdish region.

The movement of Syrian Kurds is also in close relation with Turkey’s Kurdish movement, the PKK. When the United States announced its policy of creating a "coalition" of forces to fight the IS forces and using its airplanes to try to stem their advance, Turkey found itself immediately under considerable US pressure to join the struggle. In particular, the Kurds on both sides of the border, and the United States, have called for Turkey’s opening its borders in both directions: to permit Syrian Kurds who are under threat in Kobani and elsewhere from the IS forces to enter Turkey for safe haven and to allow Turkish Kurds to enter Syria to assist militarily the Syrian Kurds.

Turkey has been most reluctant to accede to any of these requests. President Erdogan declared that, from Turkey’s point of view, both the IS and the Turkish Kurdish movement, the PKK, are equally terrorist movements, and Turkey saw no reason to open its frontier in this way. This is a strange position to take since the Turkish government has been negotiating for some time with the PKK despite the fact that they label it as a terrorist movement. The Kurdish movements, the PKK and the DYP, cannot in any sense be equated with the IS which is pursuing a very aggressive military campaign against all and sundry.

So what is Turkey saying to the world? The government has argued that fighting the IS will strengthen Bashar al-Assad. This is probably true. But therein lies Turkey’s choice and its ambivalence. The Turkish government is demanding a promise from the United States that it will not be diverted from pursuing a struggle against the al-Assad regime, and in particular that it establish now a no-fly zone on the frontier. The United States argues this is impossible to do without troops on the ground, which they will not send.

And here is the choice: which dyad? If one gives priority to the struggle against the IS, it does reduce the support given to the ever smaller so-called moderate Islamists in Syria. If one gives priority to fighting al-Assad, it does strengthen the IS and will undoubtedly lead to a widespread massacre of Syrian Kurds by the IS, as the United Nations Syria envoy has just warned.

The other Turkish ambivalence concerns their negotiations with the PKK. If Turkey turns its back on the dilemmas of the Syrian Kurds, it will probably lead to a rupture in the negotiations with the PKK in Turkey. They have been so warned publicly by the PKK. But if the Turkish government turns more actively against the IS, the result could be that the PKK would have a stronger position in the continuing negotiations.

In addition, Turkey has been trying to improve its relations with Iran. The two countries share strong common interests in Afghanistan and Iraq, and even support the same forces in Palestine. But not fighting actively against the IS will interfere with this attempt to increase ties. On the other hand, active opposition to the IS will interfere with Turkey’s attempt to present itself as a champion of Sunni Islamists.

One way or the other, Turkey will have to come to a more coherent policy in the very near future. Otherwise, its claim to be a major actor in the region will fall flat. And its internal struggle with the Kurds will probably explode into violence again. Ambivalence is not admired in a zone of such hot struggles.