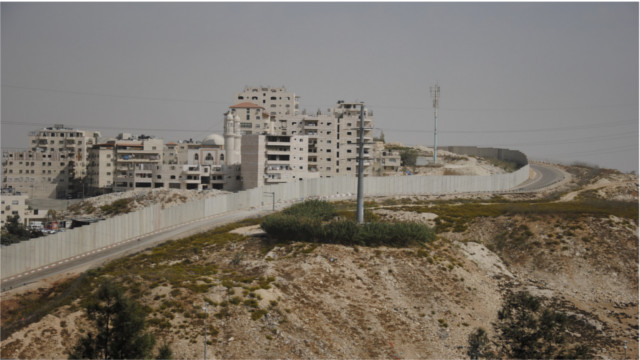 "The Berlin Wall, this symbol of state abuse cast in concrete, took millions of people to the limits of what is tolerable, and all too many beyond it.”

On the 25th anniversary of the fall of the Berlin Wall, German Chancellor Angela Merkel delivered a speech of sublime hypocrisy when juxtaposed beside the illegal Apartheid/Annexation Wall and beside the blockade ‘wall’ of Gaza constructed by Israel, in which she once vowed, "Germany will never abandon Israel but will remain a true friend and partner.”

Merkel rhapsodised: "The fall of the Berlin Wall showed us that dreams can come true - and that nothing has to stay the way it is, no matter how high the hurdles might seem to be".

The fact is Germany’s partnership with Israel is one of the major hurdles that block Palestinians’ right to self-determination under international law. In 2012, Germany abstained ( actually if its not a ‘Yes’ it’s a ‘No’ ) to accord Palestine Non-Member Observer State status in the UN, voted against Palestine’s membership to UNESCO and buttressed the brazen lie that Israel’s war crime, Operation Protective Edge, was an act of self-defense.

The Palestinian parents in Gaza mourning the deaths of 506 innocent children were not living the hackneyed dreams about which Merkel waxed lyrical.

To add to her hypocrisy, a mere month after the horror of Israel’s war crimes on blockaded Gaza and the destruction of the homes of half a million families in Gaza who are struggling with the consequent trauma, the grief and survival with winter approaching, Merkel’s government donated a shameful and paltry $63 million at the donors conference in Cairo. Then, six days later, hands Israel an obscene $382 million discount on a missile boat (no doubt the kind that can continue killing little Palestinian boys playing football on Gaza beaches).

There was no stopping the Chancellor’s banal posturing,

"We can change things for the better - that is the message of the fall of the Berlin Wall."..for the people in Ukraine, Syria, Iraq and in many, many other regions of the world where liberty and human rights are threatened or being trampled”.

Glaringly omitted was Palestine, the longest trampling of human rights and freedom in modern political history by Israel and western governments. Mentioning Ukraine, Syria and Iraq was a free plug for US imperial ventures.

Merkel goose-steps in time to America’s war drums and interests vis-à-vis support for sanctions against Iran and arming Saudi Arabia. She lacks the nationalistic pride of former Chancellor Gerhard Schroder who, in line with the majority of Germans, opposed the unsanctioned and unjustified US military intervention in Iraq, opting instead for a peaceful solution.

Angela Merkel is hailed by Forbes as the world’s most powerful woman, and yet, she submissively lets Israel perpetually pull on the Holocaust ring through Germany’s nose and suck billions of reparation euros from the German economy while Israel simultaneously shifts its own reparation dues to the Palestinians onto Germany and compliant international donors.

Merkel penitentially made reference to November 9th‘s shared anniversary with ‘Kristallnacht,’ the 1938 Nazi pogrom against Jews and synagogues, which she condemned as a ‘day of shame and disgrace’.

In September, she publicly condemned antisemitism and anti-Israel sentiment, "Anyone who hits someone wearing a skullcap is hitting us all. Anyone who damages a Jewish gravestone is disgracing our culture. Anyone who attacks a synagogue is attacking the foundations of our free society."

But, during the past weeks and present days, no such condemnation was heard from the German government over the demolition of Palestinian homes in Jerusalem for Jewish settlement expansion, over the Israeli desecration of the al Aqsa mosque, the closing of it to Palestinian worshipers and over the inflammatory calls to replace it with the third temple.

If Merkel genuinely felt ‘the responsibility of German history’ she would ensure Germany never again participates in state terror and therefore would not have revoked the safeguards restricting arms exports to areas of conflict and to dictatorships.

Germany supplies Israel with nuclear capable Dolphin-class submarines, anti-armour weapons systems made by German Dynamit Nobel Defense (became a subsidiary of Israel’s RAFAEL in 2004) which also combined with Israel’s Corner Shot to create the CSP in 3 versions: a pistol, assault rifle and grenade/ teargas launcher that fire around corners.

Apropos, the ‘Iron Frau’ is responsible for supplying the German-made weapons that help enforce Israel’s Nazi-like policies against Palestinians such as Lebensraum( land expansion), human experimentation ( Gaza and her people are a laboratory of testing Israeli weapons), deportation and ethnic cleansing (under Plan Dalet, forced expulsion of 700,000 Palestinians was executed in 1948), racial policies of Aryan superiority (apartheid and the right of Jews only to the land of Palestine), institutionalised terror, night raids and wholesale imprisonment ( in 2013 Israeli soldiers kidnapped 3874, including 931 children, the figures are far higher in 2014) , looting and destruction of Jewish property (Electronic Intifada reported “The Israeli army confiscated nearly $3.5 million worth of property and cash from Palestinians during its recent three-weeks long military incursion into the West Bank, under the pretense of searching for three Israeli teens who went missing on 12 June and whose bodies were found 30 June.”), Nazi Law for the Protection of German Blood and Honour prohibiting marriages between gentiles and Jews (With very few exceptions, Israeli civil law does not permit marriages between Jews and non-Jews within the state of Israel.), and the establishment of ghettos (the West Bank and Gaza are virtual ghettos sealed off by checkpoints),

In the ghettos the Jews are to receive only as much food as the rest of the population can spare, but not more than is required for their bare subsistence. The same applies to the allocation of other essential goods.

It was revealed that “the dietary needs for the population of Gaza are chillingly calculated” or as Israeli bureaucrat, Dov Weisglass put it, "The idea is to put the Palestinians on a diet, but not to make them die of hunger."

In February 2014, a photo went viral of Merkel with a Hitler moustache shadow cast by Netanyahu. Although met with amusement, the photo evokes a karmic warning that the shadow of Zionism has Nazi resonances.

Objection to comparing Israeli and Nazi policies is usually made on the grounds that no atrocity can surpass the horrendous extermination of 6 million Jews over 6 years, but how do you measure the accumulative trauma and suffering of all Palestinians suspended in a 67 year transit between birth and ethnic cleansing?

Today, there are more than 11.6 million native Palestinians, more than half of whom have been dispersed worldwide by Israel, which denies their legal right of return. The almost 6 million within Palestine, every single day, ostensibly suffer war crimes and crimes against humanity perpetrated by Israel, which enjoys carte blanche impunity to violate international law granted by Germany and Israel’s other powerful backers.

The partition of Germany into military occupation zones by the WWII victors was, ultimately, an ideological war between between the US and Russia and an act of collective punishment on the German people. Despite Angela Merkel living her first 35 years on the eastern side of the Berlin Wall, which was under oppressive Soviet control, her far right-wing heart is devoid of empathy for Palestinians struggling to survive under oppressive Israeli control.

In that dark light, Merkel’s mastery of pedestrian rhetoric shines: "It was a victory of freedom over bondage and it’s a message of faith for today’s, and future, generations that can tear down the walls - the walls of dictatorship, violence, ideology and hostility."

You can be sure Frau Merkel wasn’t referring to the iron wall policy of Zionist dictatorships that began with Ben Gurion, or to the Zionist violence in the Nakba, or Zionist apartheid and Eretz Israel ideology and definitely not to Israeli hostility that two months ago bombed to smithereens the bondaged inmates of the concentration camp that is Gaza.

Sooner than later, these zionist walls will fall. There is a new generation of Germans not cowered by the burden of antisemitism blackmail, who took to the streets protesting the war on Gaza, who dare to speak out defying Merkel’s clamp on their freedom of speech, who advance BDS and Palestinian rights.

And there has always been and always will be generations of Palestinians whose spirits are armed with dignity and sumud.

On November 8, in an grand gesture of resistance and defiance, young Palestinian activists armed with hammers, demolished a section of the Apartheid/Annexation Wall in East Jerusalem “to mark the 25th Anniversary of the fall of Berlin’s Wall, and that “as the Berlin Wall fell, the Annexation wall in Palestinian will fall, along with the occupation”.

Dr. Vacy Vlazna is Coordinator of Justice for Palestine Matters. She was Human Rights Advisor to the GAM team in the second round of the Acheh peace talks, Helsinki, February 2005 then withdrew on principle. Vacy was coordinator of the East Timor Justice Lobby as well as serving in East Timor with UNAMET and UNTAET from 1999-2001.