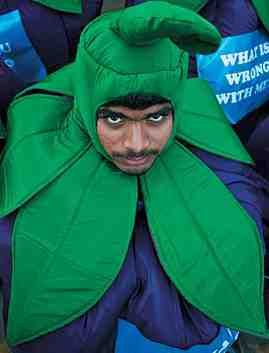 Monsanto’s plans to push genetically modified (GM) food crops in Asia ran into a wall on February 9, 2010 when India’s Environment Minister put a moratorium on the introduction of a variety of GM brinjal (eggplant) containing Monsanto’s patented Bt gene.

China too has been hesitant to approve GM food crops, notably GM rice. It appears that these Asian governments, both outspoken proponents of GM agriculture, are not only feeling the heat from their people’s strong resistance to GM food crops but are also being forced to think twice about turning their seed supplies over to Monsanto and the other foreign transnational corporations (TNCs) that control the global GM seed market. What they seem to be saying is, “Yes, we want GM seeds, but we want our public institutions to be involved in their development to safeguard the national interest.” It’s a pretty hollow argument, given how “public” research is in bed with corporate interests these days and how removed GM agriculture is from the needs of Asia’s farmers. For Asia’s small farmers is there really any difference between a national GM crop and a transnational one?

A fuzzy line between public and private in China

In his report imposing a moratorium on Bt brinjal, the Indian Environment Minister referred, amongst other things, specifically to India’s lack of a “large-scale publicly funded biotechnology effort in agriculture” that can serve as a countervailing power to Monsanto, and pointed to China’s publicly funded programme in GM, which he says is far ahead of India’s. 1 The moratorium is thus in part intended to give India time to catch up with the TNCs and its neighbour, and the long-term path still points to GMOs. This was not what the local protests against Bt brinjal across India were about. They were against GM crops per se, not simply Monsanto’s version. For the protesters, a strong national biotech programme is not going to shield Indian farmers from corporate profiteering and the other pitfalls of GMOs, as China’s example shows. China’s biotech effort goes back to its National High Technology Research and Development Program (“863 Program”), launched in 1986, in which it shifted the orientation of the country’s public agricultural research towards the commercialisation and patenting of research results in biotechnology. Through this programme, the Biotechnology Research Institute of the Chinese Academy of Agricultural Sciences (CAAS), developed an insect-resistant Bt gene in the early 1990s, which it inserted into cotton. The rights to the Bt gene were then licensed exclusively to a spin-off company called Biocentury Transgene, which is controlled by the Shanghai Oriental Pearl Group, one of China’s largest media and real-estate conglomerates, and Origin Agritech, a Chinese seed and pesticide company, registered in the British Virgin Islands, and whose stock is traded on the NASDAQ. Origin Agritech recently acquired the exclusive licence for a glyphosate-resistant gene developed by CAAS for use in soya beans, maize, cotton, rice and canola, which will compete with Monsanto’s Roundup Ready crops.

The big difference between Biocentury Transgene’s Bt cotton and Monsanto’s Bt cotton, which was commercialised in China in 1997, is the price. With its cheaper seeds, Biocentury Transgene has taken control of 80 per cent of China’s Bt cotton seed market, and it is expanding overseas into Vietnam, India, Pakistan and the Philippines. Yet in its dealings with farmers, Biocentury Transgene has been as ruthless as any multinational. According to the company, its “reputation in the seed industry has been built around … its technology licensing and tech fee collection mechanisms, as well as its pioneering actions to enforce intellectual property infringements of its technologies in China.” Its products are no different from those of the foreign multinationals either, as its Bt cotton seeds are causing the same problems for farmers in China as Monsanto’s Bt cotton seeds have caused for farmers in India. Researchers have found that the widespread planting of Bt cotton in China is producing dramatic secondary pest outbreaks, increasing the use of pesticides, and saddling farmers with higher costs. Indeed, because of the problems with secondary pests brought about by the switch to Bt cotton, Bt cotton farmers in China were spending, by 2004, as much on pesticides as non-Bt farmers, and at least twice to three times as much on seeds.

Now the focus in China is on GM rice. At the end of 2009, the Chinese Biosafety Committee of the Chinese Ministry of Agriculture announced its approval of GM Bt rice for commercial cultivation. The main variety under consideration was a Bt rice developed by Huazhong Agricultural University (HAU), which has been developing GM rice under the 863 program since 1998. HAU still needs two more certificates from the Chinese authorities before it can bring its rice to market – and there’s also the actual process of commercialisation to sort out. The University is more than likely to partner a private company for this last step, and this company will probably be Monsanto. In October 2009, HAU and Monsanto signed a major partnership for the commercialisation of GM crops.

“Monsanto’s proven ability to commercialise and market new technology could enable our research to advance from laboratory concepts to products in the world market at a much accelerated pace”, said Professor Qifa Zhang, the scientist at HAU leading the development of its Bt rice.

Partnering to push GM in India

The line between public and private, national and transnational, is just as loose in India. In early May 2010, for instance, seed multinationals, domestic seed companies and the government’s National Seeds Corporation joined forces to battle against the Andhra Pradesh State Government’s attempt to put a cap on royalties that companies can charge on GM seed as “technology transfer” fees from farmers. All of these players are promoting and selling Bt cotton seeds, and raking in profits even as farmers struggle with a hand-to-mouth existence.

As for Bt brinjal, it has always been a shining example of the public–private partnership model and North–South cooperation advocated by the promoters of GMOs. The project was designed by the US government through a programme funded by USAID and led by Cornell University, called ABSP II. The partners involved include Monsanto’s Indian avatar, MAHYCO, 5 which has licensed Monsanto’s patented Bt genes to the project, India’s Tamil Nadu Agriculture University (TNAU), the University of Agricultural Sciences (UAS) in Dharwad, and the Indian Institute of Vegetable Research in Varanasi. The project also extends to Bangladesh, where the Bangladesh Agricultural Research Institute and the University of the Philippines–Los Baños have already been conducting field trials of Bt brinjal under memoranda of understanding (MOUs) with MAHYCO.

The public–private partnership still leaves the likes of Monsanto very much in control. As can be seen from the Material Transfer Agreement (MTA) between TNAU and MAHYCO of March 2005, the public partners supply the local germplasm, to be freely used, while MAHYCO/Monsanto supplies its transgenes, loaded with patents. When MAHYCO in its laboratory crosses its proprietary insect-tolerant Bt eggplant lines into the local farmers’ varieties supplied by TNAU, the resultant progeny becomes the “product” of the company. TNAU gets some limited rights of breeding to adapt the new GM “product” for planting by local farmers, but the agricultural university is barred from using Monsanto’s “product” as parental material for the production of commercial hybrids. In effect, through the Bt brinjal project, the private sector gets to tap into the privileged access that the public research institutes have to farmers’ varieties, from which it can develop its own GM products; the universities may get either funds or training to pursue fancy biotech research; and the farmers, who were never asked about the research, get to watch from the sidelines as their local varieties are genetically modified, locked up with patents and turned over to a transnational seed company.

What is more, the ABSP II project has always been as much about changing public policies as about developing technology. Tightly linked to this project is the USAID-funded South Asia Biosafety Program (SABP), which is assisting the governments of Bangladesh and India to “streamline” their governance of biotechnology. The Parliament of India is due to consider two proposed pieces of legislation concerning GM that have emerged from the Program: first, a Seed Bill law to allow for the registration and marketing of GM seeds, and a second to set up a three-member biotechnology regulatory authority that can more quickly rubber-stamp GMO approvals. In Bangladesh, the Program hastened the development of a National Institute of Biotechnology Bill, which was tabled before Parliament in February 2010. If adopted these laws will open the door to the approval of many more GM crops.

So too will the changes to the culture of public research that the Bt brinjal project and other international GM cooperation programmes have deliberately fostered. They have facilitated a shift in public research towards partnerships with corporations and the patenting of research results. India, for instance, is developing legislation that would encourage public-sector scientists to apply for intellectual property rights on crop varieties developed through their public research programmes, based on a US model that has been heavily promoted in the country through the ABSP II project and other US-backed activities.

Asia’s public agricultural research institutions are metamorphosing into private companies, and their central mandate, to serve their country’s farmers, is fast becoming little more than an abstraction.

The participation of public programmes in the push for GM crops is re-igniting a discussion on public research in Asia and bringing forward some fundamental questions. Whose interests are served when public research institutes devote their limited resources to GM crops? Who owns the varieties collected by and held in state agricultural universities and national gene banks? People had assumed that farmers’ varieties in the national system would be safe from private companies. Yet, in the case of Bt brinjal, national agricultural universities supply a seed company in bed with Monsanto with local eggplant germplasm, and then, by virtue of an MTA and the insertion of Monsanto’s patented Bt gene, that material becomes the company’s property! The agriculture university is a mere conduit for Monsanto and other seed giants to take control of farmers’ varieties, passing them to companies that have a vested interest in converting the original source of seeds – the farmers – into end-users and continual consumers of their GM products. Small wonder that an organic farmer in the Philippines, at a public forum organised against Bt talong (eggplant) on Earth Day 2010 in Makati City, pertinently asked, “Why aren’t our own scientists on our side?”

People’s pressure has so far kept GM food crops largely out of farmers’ fields in Asia. But people haven’t been able to stop GM crops from invading the fields and laboratories of the continent’s public research institutions. These public spaces have thus become entry points for a corporate agenda that seeks to destroy the many local varieties that small farmers and their farming cultures have kept alive, which provide the basis for a future food system that can look after people’s livelihoods and food needs. It is time to replant these fields, which belong to the people, with the diversity of local varieties that farmers have developed (at times with contributions from public scientists), and to move towards a public–grassroots partnership for research that supports non-GM farming options.

For more information or to show your support, go to the Grain Website.

Photo and article courtesy of GRAIN, a small international non-profit organisation that works to support small farmers and social movements in their struggles for community-controlled and biodiversity-based food systems. Their support takes the form of independent research and analysis, networking at local, regional and international levels, and fostering new forms of cooperation and alliance-building. Most of their work is oriented towards, and carried out in, Africa, Asia and Latin America.