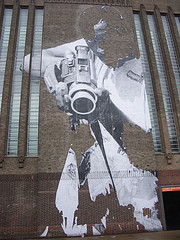 The main take-home lesson in the film is that “instead of carrying guns, children can learn to carry cameras,” says Mohammed Chaloob.

On a windy afternoon, two weeks ago, the GDP web documentary HQ was visited by Mohammed Chaloob and Zuhair Al-Jazairy. One is a documentary-film and theatre director, and the other, editor-in-chief the of the Aswat al-Iraq (Voices of Irak) press agency, founded by the UNDP and Reuters. They’re both from Iraq, visiting Canadian institutions and NGOs that work with advanced media. After visiting the Canadian Broadcasting Corporation, local newspapers and many social and cultural groups in and around Montreal, the filmmakers were ready to get some insights into the NFBs expertise in web documentary production and distribution.

They came to the National Film Board to get a deeper understanding of how we developed the GDP multimedia documentary, but they left us feeling as if we had learned as much as they had from the exchange.

We introduced the GDP project by explaining the theme, the team and then showing them four excerpts of the larger project. We showed them Poetic Justice, Rough Road, “The north is suffering” and Song for the New Depression. They asked to watch Poetic Justice twice so as to fully inhale Marjolaine Beauchamp’s beautiful spoken work.

Their amazement triggered our own interest even more. And so came our questions to them. Why Canada? “We find it interesting to observe different nationalities living together in this country. We also wanted to see how models can be adapted.”

Al-Jazairy and Chaloob expressed appreciation of how the GDP project was trying to document the many human impacts of the economic crisis as it is happening. “Catching turning points is what interests me. This happened for me when museums started to get looted in Iraq’s capital in April 2003,” said Al-Jazairy. The media editor, author of many books and occasional documentary film director had been living in exile in London for a number of years before returning to Baghdad in the aftermath of the US-led invasion.

“I also wanted to document how kids deal with war, and how events had shaped their dreams,” he said, while emphasising the constraints in which he was working – constraints that make our own situation look easy. He related how he had encountered violence and fear soon after his return to his homeland. “My team was captured and then released. It became dangerous. Cameras couldn’t be used publicly anymore. People came to the camera to shout and intimidate. We simply couldn’t stay in the streets for any longer.” He decided to switch tactics and asked the children of Baghdad to make drawings based on their dreams. Drawings became ersatz material for documentary filmmaking. “Kids drew scenes of war…” Al-Jazairy remembers. Their dreams for the future seem to have been completely evacuated by the present, the war. “Our hope today is to have stability,” he concluded.

On the question whether Iraqis would actually be interested by the web documentary format, Mohammed Chaloob is categorical. “We have low experience with artistic activity online at present.” As one of the main figures in the Nenurta Group for Arts – which works in fiction and documentary film, as well as theatre — he has performed theatre plays in schools. “We reach out. We go see the communities with our creations,” he reflects. The internet is underdeveloped in Iraq and multimedia creations are not yet part of the cultural scene. But it may happen before long, given the recent surge in mobile phone use. “There are loads of stories out there,” Chaloob insists.

Once we had watched GDP photo essays and films together, Chaloob turned his laptop screen towards us and pushed play on a 10 minute fiction. One of his own films, it is testimony to one of the main problems that Iraqi youth are facing today. It’s a beautifully crafted piece about 4 youngsters who are continuously exposed to arms, and to gun culture: in their violent education at home, through peer pressure, etc. The sensitive film shows how guns influence kids’ imagination. The film’s rhythm is established by the many power outages. The main take-home lesson in the film is that “instead of carrying guns, children can learn to carry cameras,” says Chaloob.

“Art is still often a taboo,” explains Al-Jazairy. “This is a culture we need to overcome. Some kids dream of entering the cultural world.”

Link to the original article: http://gdp.nfb.ca/blog/documentary/%E2%80%9Cinstead-of-carrying-guns-children-learn-to-carry-cameras%E2%80%9D/